The feet of wine legends have trodden the undulating expanses of glorious vines on the slopes of the Bottelary Hills. The late Stevie Smit of Koopmanskloof, Danie Steytler of Kaapzicht, the Roos family on Mooiplaas, Kosie Steenkamp at Groenland and the Morkels of Bellevue – they have all left their spoor on these slopes. Not only home to some of the region’s oldest farms and vineyards, this part of Stellenbosch’s wineland geography also produces several of the region’s best wines and supplies grapes to many of the finest wine labels in South Africa. Its terroir of gravel, clay and koffieklip, exposed to maritime winds from the north-west in winter and the fresh south-easterly in summer, complements the legacy of the pioneering winemakers. 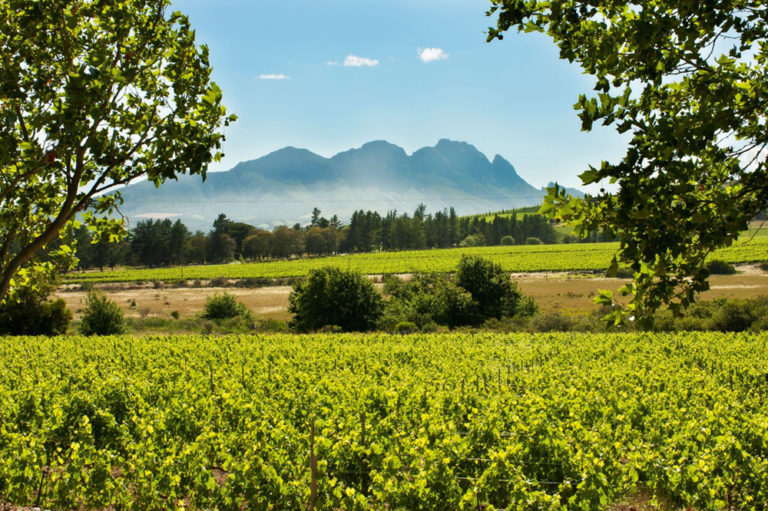 At the Stellenbosch end of Bottelary Road, Hartenberg is one of the locale’s – and the country’s – top wine addresses, with a history that goes back to 1692 and encompasses the usual complement of settlers granted land by the VOC, the Dutch company that controlled the Cape from 1652 until 1795. It was in 1948, however, that Hartenberg’s journey to wine glory began, when the property was purchased by Dr Maurice Finlayson, a retired pathologist and keen oenophile, and his wife Eleanor. Used to drinking the best of Burgundy and Bordeaux, especially at the Harlequin Restaurant in Parow, the Finlaysons had lofty ambitions for their own 180ha estate.

When the Finlaysons first bought the farm, the grapes grown there were being sold to various cellars. The new owners changed that. They planted more vineyards and reopened the cellar, bringing it back to working order, and in 1968, the first Hartenberg wines were released under the Montagne label. The Montagne Cabernet Sauvignon from the 1960s and ’70s is still deemed a rare classic today.

Besides producing fine wines, Hartenberg helped to create the Finlayson legacy, which is firmly rooted in the South African wine landscape. Dr Finlayson’s sons, Walter and Peter, who both made Montagne wines, today count among the elder statesmen of the local wine industry. In turn, their sons, David and Peter-Allan, are leading the newer generation of great local winemakers.

Nestled neatly between the industry elders and the young guns is Carl Schultz, a well respected South African winemaker.

His solid reputation stems largely from Hartenberg, where he has been heading up the cellar and vineyards since 1994 and today is the estate’s director. Hartenberg is now owned by the family of the late Ken Mackenzie, who bought the property in 1987 from the Gilbey’s Corporation.

A player in the wine industry since 1989, Carl has been a formidable member of the team that laid the foundations for Brand South Africa when it experienced a renaissance in 1990 as the new political dispensation was being ushered in. He and his colleagues have been defining its position and reputation ever since. At Hartenberg he developed the single-vineyard concept in wines: Gravel Hill Syrah (1995), Eleanor Chardonnay (1997), Stork Shiraz (2003) and the estate’s Bordeaux blend, the Mackenzie (2003).

“Since I began in the industry, there have been a number of major developments, especially in terms of technology and knowing the vineyards and terroir,” says Carl, as mellow and laid-back a son of the soil as you’ll find. His two Jack Russells, compulsory accoutrements on many a Cape wine farm, alternate between sitting on their boss’s lap and sniffing at the legs of intruders.

“Efficient technology – and in this I include access to information and data – has most definitely helped improve the standard of South Africa’s wine quality,” he says. “But I think a major factor contributing to getting us to where we are today is understanding the importance of your site, the geography of where you are growing grapes and making wine. This understanding, knowing what the terroir and environment have given you in the vineyard, allows you to truly focus so that you can do them justice with the finished wine.”

In this respect Hartenberg is particularly blessed. It has terrific soils of stony koffie-
klip, gravel and clay. It is one of the first farms in the Stellenbosch area to receive winter’s cool maritime air from the Atlantic some 30km away, while in summer the prevailing south-easter blows in off the Southern Ocean. It lies in an ancient valley, watered from a pure source that flows the entire length of the property and empties into a 65ha natural wetland. Another 85ha of the estate is planted to vines.

And it is in red wine country. “About 80% of our total production is red wine,” says Carl, “with Shiraz constituting the bulk of it.”

This focus has allowed Hartenberg to offer wine lovers five different Shiraz wines, from CWG Auction Shiraz and the top-end Gravel Hill – a South African great made from a vineyard originally planted in 1978 – to an entry level Doorkeeper label.

When Shiraz is truly good, its voluptuous silkiness and the ethereal presence of exotic spice combining with the dense purity of red-fruited wine, it can only be described as gorgeous. It is this allure that has kept Hartenberg at the top of the South African Shiraz game and it has the accolades to prove it. Gravel Hill Syrah, the estate’s flagship, has been listed on Emirates First Class for five years and was a Tim Atkin Shiraz of the Year in 2019, as was Hartenberg’s The Stork Shiraz, the estate’s second flagship Shiraz. This wine has achieved a global Top 10 ranking at the annual Syrah du Monde Competition in France on three occasions (the only South African wine to do so), including third place in 2007 and first in 2012.

“We pride ourselves on being able to offer the public a diverse spectrum of Shiraz,” says Carl, “from the Doorkeeper at a modest price (R100) right up to the flagship Gravel Hill Syrah nudging R900.”

Cabernet Sauvignon and Merlot are two other formidable red varietal wines from Hartenberg. On the white side, the Chardonnay counts among the very best, underscoring Stellenbosch’s ability to produce amazing wines from this blue-blooded white lady from Burgundy. As Boela Gerber, the cellar-master at Groot Constantia and a leading winemaker says, “The Hartenberg label guarantees great wine. No matter the grape variety or combination of varieties used, excellence in the finished product is a given. Carl is one very, very good winemaker on a property with incredible terroir.”

He may be known as a master Shiraz craftsman, but Carl’s personal love is Riesling, which he refined on arrival at Hartenberg. “I have been fortunate to travel extensively in Germany and Alsace and could happily do that for the rest of my life on account of the Rieslings they make there,” he admits. Hartenberg is one of a handful of Riesling producers left in South Africa – there are just two in Stellenbosch – which is unfortunate, as in the hands of an aficionado locally made Rieslings are classic, variety-true wines to be proud of. Slight residual sugar highlights the wedges of citrus, guava and pear, while that brilliant Riesling acidity adds vibrancy, brightness and life-affirming zeal.

Hartenberg lies in an ancient valley, watered from a pure source, and its terroir is perfect for the production of exceptional wines.

And life-affirming is something wine, at least, can offer. Carl, his Jack Russells and I sit outside the Hartenberg wine-tasting venue, autumn leaves falling on an estate that is deathly silent; like the rest of the wine industry, visitor-less due to the debilitating COVID-19 restrictions.

A man of the land whose lifelong love of all things plant-like led him to study viticulture and oenology, Carl is only too aware of the other great calamity facing humanity. “Global warming is – in non-pandemic times – the one major factor of concern the world has to face,” he says. “The data are there for all to see and as winemakers, we feel it with each season in the vineyard. There is less rain and consistently so. When I worked on Simonsig in the early 1990s, the late Frans Malan said a farmer who irrigates the vines does so for quantity and not quality. Today, practically the whole of Stellenbosch is irrigated, obviously at different levels, due to climate change. Trying to produce a decent crop with the way the temperatures have increased and rainfall has dropped makes dryland farming almost impossible.”

An ethos of conservation and sustainability takes top priority on Hartenberg, from the planting of a variety of suitable cover-crops in order to ensure living soils and conserve water to the preservation of indigenous fauna and flora in natural habitats. Add the spoor of the forefathers and current custodians and the Bottelary Hills are, definitely, alive.

It takes a village