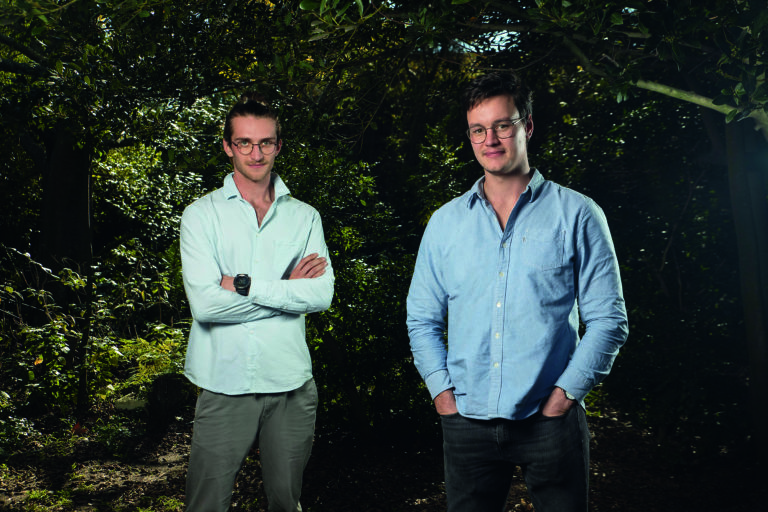 At AD-Tech Wihan Bekker (left) and Jean Pierre du Plessis (right) are using data to measure social impact and do their bit in the battle against COVID-19.

When Covid-19 hit the Western Cape earlier this year, the impact on vulnerable communities in the Cape Winelands was both swift and devastating. As businesses shut up shop, hundreds of workers were given notice, leaving thousands of families in need of help to put food on the table.

Not surprisingly, the broader Stellenbosch community showed its generosity and sense of spirit by forming Stellenbosch Unite, a partnership between local government, non-profit organisations and civil society. Within weeks, more than R2 million had been raised to assist vulnerable families with food and care parcels. Amid the flood of goodwill a more difficult question quickly arose: how could Stellenbosch Unite ensure those most in need were the first to be helped? The solution: data.

Wihan Bekker is a man who loves data. The chief executive officer of African Data Technologies – AD-Tech for short – Wihan was born and raised in Bloemfontein before moving to Stellenbosch in high school. In 2018, he graduated from Maties with a degree in civil engineering and is currently working on his master’s, with a particular focus on measuring and mitigating embodied carbon – the overall carbon impact, from manufacturing to end-of-life recycling – in the construction industry.

With his degree in hand, Wihan co-founded AD-Tech with Dr Patrick Okonkwo and Jean Pierre du Plessis, both alumni of Stellenbosch University.

“AD-Tech started off by going into construction and pre-fabrication, doing life cycle analysis, and we soon realised the absolute importance of data. You can’t plan and design new green initiatives without data on the ‘business as usual’ cases,” explains Wihan.

“Using data, AD-Tech enables us to measure impact,” adds Jean Pierre, AD-Tech’s director of social and business development. “Our projects are taking off at speed and we’re really making headway in making a difference.”

When the company was founded in October 2019, its focus was on sustainability consulting but the onset of the COVID-19 pandemic in March 2020 prompted it to pivot, using its expertise in data analysis to assist Stellenbosch Unite in helping the Winelands’ most disadvantaged communities.

Deciding who was most in need was a difficult yet crucial element of the Stellenbosch Unite relief effort. Its resources were finite and the list of people desperate for help was growing. Although families in need had been identified through a network of non-profit organisations, community leaders, churches and volunteers – who also assisted with distribution – the next challenge was how to identify the most needy among them and ensure there was no duplication. 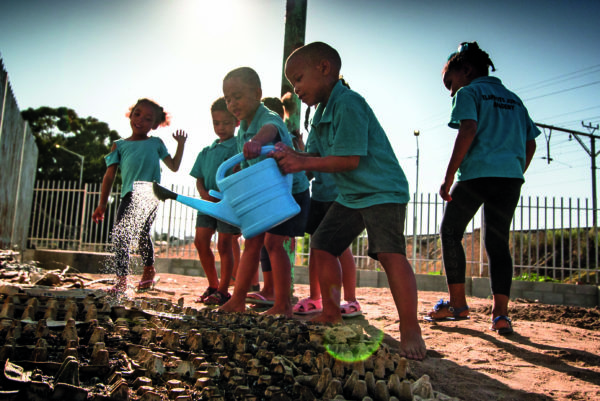 That’s where AD-Tech stepped in. Wihan and engineer Riaan Truter built a robust database and mobile app to collate the data that would identify those needing help and specifically those most in need and then manage logistics and direct the relief efforts, with Nirvana Milton, the company’s marketing and community interaction manager, supporting the co-ordination of community leaders on the ground.

An original weighting system helped co-ordinators to allocate the limited resources for maximum impact while recording and summarising what benefits had already been delivered to specific families. With new food parcels to send out, the database could quickly provide detailed lists of specific recipients for community co-ordinators to act upon.

While AD-Tech brought, at no cost, a savvy data-driven solution to the table, Wihan is quick to praise the synergy of cutting-edge technology and old-school community connections. “It’s a high-tech backend working with the data, but the front-end of the app is all about community leaders using simple pen and paper,” he says. “Without those networks of local knowledge and grassroots community involvement, you can’t even begin.”

While actively involved in sustainability consulting, including projects such as the Stellenbosch Bridge smart-city development, AD-Tech is also engaged in building a ground-breaking digital platform that hopes to reduce waste in landfill sites.

Working in partnership with Ranyaka, a non-profit urban planning consultancy that focuses on holistic community development solutions, it has set up the Shared Resource Exchange (ShaRE), which aims to find novel ways to repurpose and recycle both household and industrial waste.

A pilot project in the Klapmuts area currently collects household recycling and transports it to buy-back centres for further processing. That’s hardly new but the crux of ShaRE is that each household is remunerated for the recycling they contribute. “Roughly 20% of the value of the recycling is returned to the household,” says Wihan. At present, rewards are paid into each resident’s TymeBank account but ShaRE is also looking at partnering with Nedbank and the Ukheshe micro-payment system.

While the pilot currently services 150 households in Klapmuts, the goal is to expand the platform to more than 250 000 homes in the next five years. “The pilot is all about testing assumptions and optimising operations but we’re hoping to roll out to the broader Stellenbosch area,” adds Wihan.

The teams at AD-Tech and Ranyaka are also looking at myriad ways in which waste can be turned into revenue. If all goes according to plan, compost from organic waste can be sold back to households, with bags delivered by drivers already circulating in the neighbourhood to collect recyclables and organic waste. Pizza boxes and cardboard not suitable for recycling will be shredded for biodegradable seedling trays. The Farming for the Future pilot project is already underway, a local Klapmuts crèche cultivates seedlings by using the compost and hand-moulded seedling trays. This offers both an opportunity for upcycling and a revenue stream for raising funds. 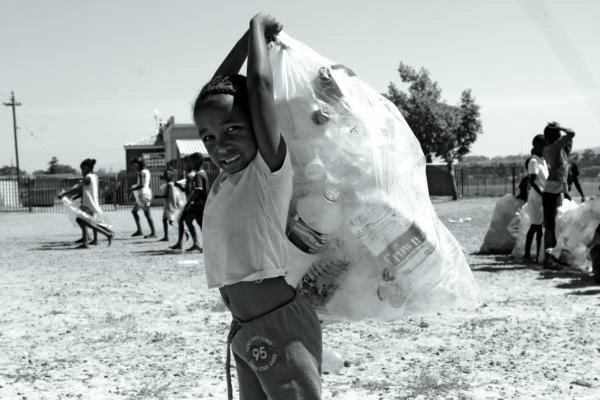 While AD-Tech has been instrumental in helping Stellenbosch Unite bring a data-driven approach to the COVID-19 relief efforts, their first passion is sustainability. An innovative recycling project incentivises local households and schools to collect recyclable materials in exchange for a share of the profits. It’s only the beginning though. Their Shared Resource Exchange (ShaRE) aims to find novel ways to connect producers and consumers, to repurpose and recycle both household and industrial waste.

And AD-Tech has even bigger plans for ShaRE, with the platform facilitating large-scale waste exchange between industries. “The plan is to scale up to agricultural, commercial and industrial waste, with the ShaRE platform facilitating the exchange of waste,” explains Wihan. “Waste generators can list the waste they need to dispose of – from left-over fruit after harvest to plastic offcuts – which can then be purchased or collected by waste buyers.”

Altruism aside, stricter carbon rules and penalties on the regulatory horizon mean it will soon make financial sense for companies to reduce their carbon footprint. Carbon credits earned through using recycled materials will allow them to trade Certified Emission Reduction units through the global Clean Development Mechanism.

The potential for waste exchange is enormous. Organic waste can be turned into compost, coffee grounds from coffee shops can be used for mushroom agriculture and plastic offcuts can be shredded and recycled. Looking ahead, the goal is to support micro-
franchising projects within communities,
enabling small businesses to recycle and upcycle plastics from home.

“We’re trying to create sustainable social business models that we can scale,” explains Jean Pierre. “If we validate those models through data, we can show funders the true impact of those businesses, as well as ensure social enterprises continuously increase and understand the social impacts they create.”

“ShaRE is about creating links between these people and about repurposing waste,” adds Wihan. “It’s so important to set up the right connections, the right stream. Most of the material is worth something but it’s in the wrong place. You just need to find the right people and connect them.” 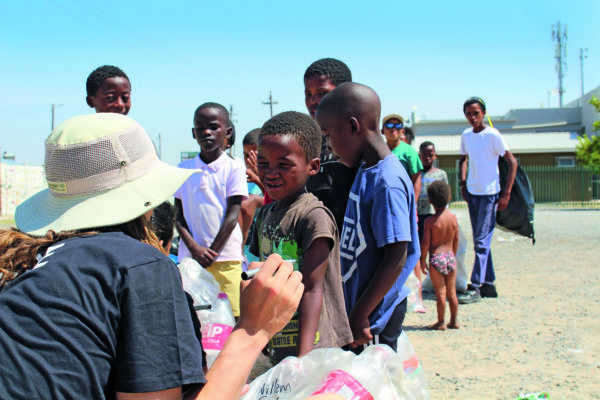 Not all cardboard is suitable for traditional recycling projects, but AD-Tech and Ranyaka have found innovative ways to convert rubbish into a resource. A perfect example is the Farming for the Future project underway in Klapmuts, which sees a local crèche using cardboard seedling trays, handmade locally from shredded cardboard, to grow seedlings for sale in surrounding communities. It’s a project where everybody wins: waste is kept out of landfills and a vulnerable community has the opportunity to earn an income.

The secret ingredient is love

Bertus Basson is back to filling bellies