People
2 weeks ago
by Stellenbosch Visio
0

While Giniel de Villiers is quite happy charging through the remote deserts of Saudi Arabia, it’s the leafy streets of Stellenbosch that he calls home. Richard Holmes finds out what makes this off-road racing champion tick.

In the high-stakes world of off-road motor racing, timing is everything. Choosing your line. Judging the turn. Knowing when to floor the accelerator and when to ease off. Being in the right place at the right time can mean the difference between a spot on the podium or a disastrous end to a race. And after more than a quarter-century behind the wheel, South African driver Giniel de Villiers knows just how important it is to get your timing right.

The orchards of the Little Karoo are a world away from the dusty deserts that define the world-famous Dakar Rally, yet it was on the quiet roads of the family farm outside Barrydale that Giniel first got a taste of life behind the wheel, steering the farm tractor before he was old enough to push in the heavy-duty clutch.

“When I was four years old, my dad built me a go-kart with wheelbarrow tyres and a 200cc lawnmower engine. It went about 50 kays an hour,” he remembers with a smile. “I loved the farm life, but… let’s just say I’m not a farmer.”

Instead, Giniel signed up for an Economics degree at the then University of Stellenbosch. He finished his studies in 1993 and was working on a career in motor racing. But then, a speed bump: he received his call-up papers for two years of military service. 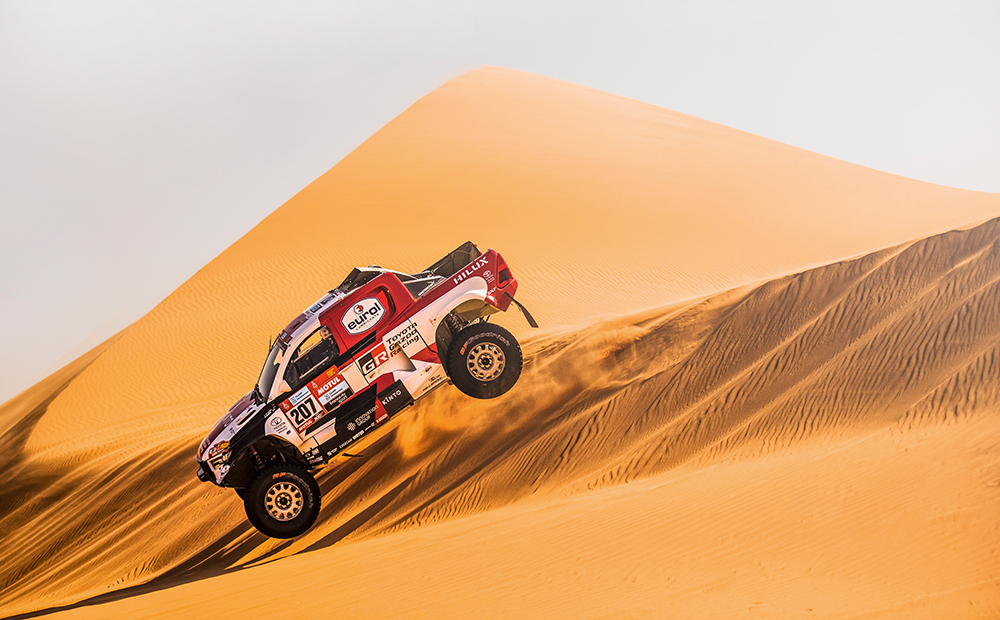 “I don’t know why, but then they got cancelled. Right at the same time I received a contract to race touring cars for Nissan,” recalls Giniel. “If I had been forced to go to the army Nissan may have decided to take another driver and by the time I came out there might not have been another opportunity. In life you need to be in the right place at the right time. And sometimes you need a little luck.”

Giniel’s success was down to more than luck though. Focus, hard work and his innate competitive spirit saw him win the South African Touring Car Championship four times. And then? Another fork in the road.

“In 2001, that racing scene really started to die down and in a way I was forced into off-road racing,” he explains. “I was with Nissan at the time and they wanted to focus on SUV and off-road racing. They said if I wanted to stay on the team I could give it a try. So I did.”

After success on the local circuit, just two years later Giniel competed in his first Dakar Rally. In 2003, the 25th edition of the famous race charged across 8 500km of North Africa, from the start in Marseilles to the finish line at Sharm el-Sheikh in Egypt. Driving for the Nissan Rally Raid team, Giniel and co-driver Pascal Maimon finished in a respectable fifth place overall. Since then he hasn’t looked back.

When he raced across the line in Saudi Arabia earlier this year, it marked his 19th consecutive Dakar Rally. In that time he has won the rally once (in 2009), claimed seven podium places and finished in the top 10 eighteen times.

But racing off-road was a sea change to what he had been used to on the track. “It’s completely different,” says Giniel. “With off-road racing you need to read the terrain and you don’t get to see the track before you race. On the track you’re bumping door handles with the next car, but with off-roading you’re mostly just racing against the clock.”

And with stages lasting for long hours in remote conditions, off-road racing makes intense physical demands on drivers. “You hit holes and you land hard. I’ve had off-road impacts measuring 28Gs on the car. You don’t see that on a racetrack unless you crash.”

It takes an enormous toll on both vehicle and driver, which is why the race is preceded by months of training, testing and trials that push men and machines to breaking point. Then they’re fixed up and pushed again.

“We do a huge amount of testing through the year and it’s a continuous process of developing and improving the car,” Giniel explains. “Technology never stands still. There’s always a new gearbox, new dampers, a new engine management system. It can take months to fine-tune the car.”

In the build-up to the Dakar Rally, Giniel also races in the South African Off-road Championship with seven races countrywide providing an opportunity to hone his skills and test improvements on the vehicle. Now under contract with the  team, he is regularly pulled in for car launches, media appearances and to get behind the wheel for commercial film shoots. Far from being a solo outing, off-road racing is an all-round team effort.

The 2022 Dakar Rally saw Giniel and co-driver Dennis Murphy finish in 5th place and while they may not have made the podium, there was celebration all round as Toyota Gazoo team mate Nasser Al-Attiyah took first place. “I’m gutted that we didn’t finish on the podium,” Giniel confesses, “but I’m also very happy because the team won the race and I was part of the development of the car.”

Aside from fine-tuning the car, he spends long hours behind the wheel, turning the sand dunes of Namibia and the Kalahari into a test-bed to keep his skills sharp. “You can only get better by driving. Some days you drive and you feel in the moment, and then you’re quick. But then the next day you don’t feel quite as comfortable. Part of the training is to be as sharp as possible every day.” Giniel pours enormous effort into driving fitness. “I try to be as fit as possible, so I train a lot. I go mountain biking. I go trail-running here in the forests above Paradyskloof. I try to get as fit as I can for the race.”

It’s also a mark of his competitive nature. When he’s not behind the wheel, he’s often flying down singletracks in the mountains behind Stellenbosch. An avid mountain biker, he has competed in everything from the Cape Town Cycle Tour to Wines2Whales and Sani2C, often riding alongside friend – and sponsor – Bobby Behan of Specialized Bicycles.

Giniel’s love for mountain biking is also the perfect training for long hours behind the wheel. “Coming down a mountain bike singletrack is very good for reaction times. You ride lines, you do jumps. It’s good for reactions and it’s good for fitness,” he says. Also a keen trail-runner and swimmer, he adds, “Luckily here in Stellenbosch everyone is very active. You can go running in the mountains, you can swim in the varsity swimming pool. There’s always someone to train with.”

Throughout our conversation at the foot of Paradyskloof, and despite the rumble of a load-shedding generator, I can hear Giniel is passionately proud of the town he calls home.

“As a person who loves the outdoors, I can’t think of a better place in the world to live. You’re 10 minutes from the beach. You can ride in the mountains. The town is so beautiful with lovely restaurants, wine bars and coffee shops,” he enthuses. “With all my racing I’ve been fortunate enough to travel the world and I haven’t yet seen a better place to live. You have to go away to really appreciate this, what we have here.”

The art of living well: On taking a walk...