You’ll need to book ahead if you want a table at the new darling of Church Street. Richard Holmes meets the dynamic woman behind the reinvented Café Meraki. 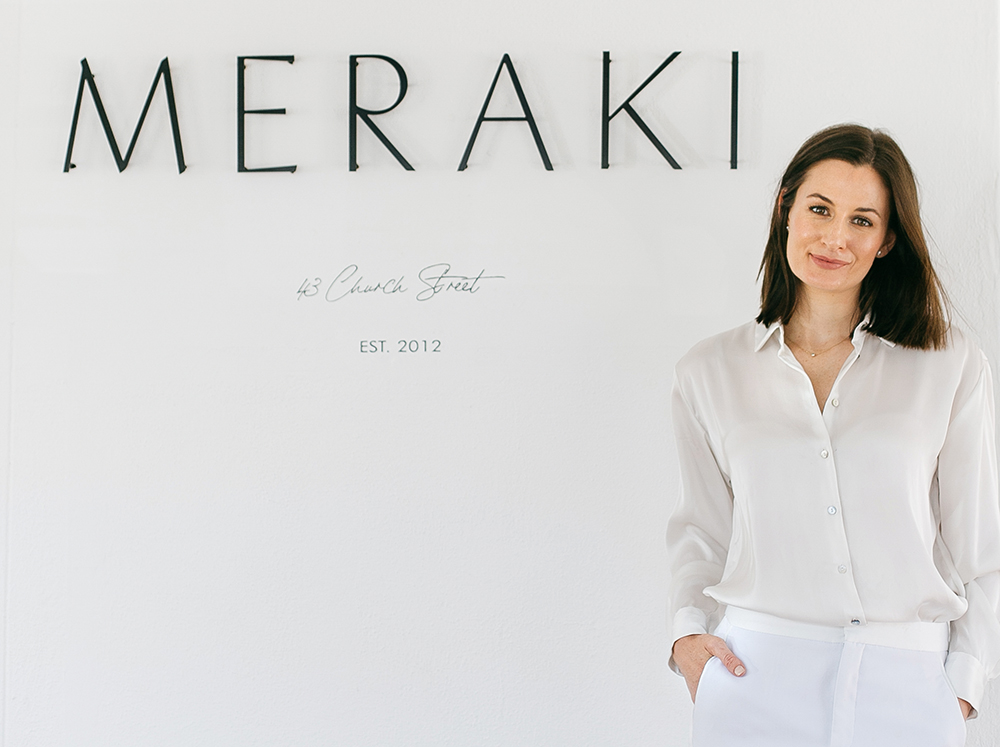 It’s a bright day in the heart of Stellenbosch, mid-morning, and there’s already a queue threading down the steps of Café Meraki. Hungry customers peer hopefully in search of a free table, but in vain. There’s energy in the air as a happy mix of locals and tourists delve into the inspiring menu, signature cortados and famous cakes. And there’s a contented smile on the face of founder Corlandi Bezuidenhout.

Dressed in white cotton, the signature colour of Meraki, she wafts between the tables, keeping a close eye on operations and greeting locals and regulars. She makes it seem rather effortless, but Corlandi is certainly no stranger to the hard work and long hours of the hospitality industry.

Growing up on a grape and citrus farm in the Boland, Corlandi took some time to find her feet when she left school. After dabbling in photography and design, she spent months walking the Camino across France and Spain. When she returned to South Africa it was with an even more audacious adventure in mind: a 10,000km trek following the ancient Silk Route into Asia.

But then fate stepped in. A café came up for sale in Stellenbosch and, at her sister’s suggestion, she bought the business. But it didn’t go according to plan. When the original owners departed, so did much of the café’s loyal clientele.

“The goodwill walked out the door when they handed over the keys,” says Corlandi ruefully. 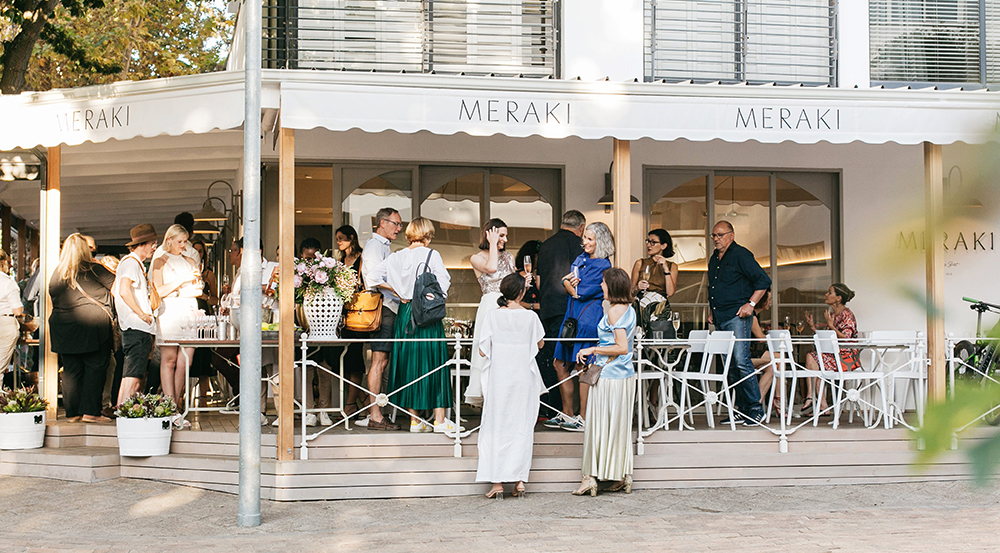 After four months of faltering trade, Corlandi realised drastic action was required. With just R12,000 left in her bank account, she closed up for the December holidays and set about reinventing the space.

“Everything that I possibly could, I painted white. That’s where the trend started. That R12,000 had to work its magic!” she laughs. And part of the reinvention of the space was a new name that encapsulated her passion and self-belief.

The name she chose was ‘Meraki’. “It’s a Greek word, meaning you do what you do with love and passion, and to give of yourself in whatever you find yourself doing,” she explains. Wanting to honour her Afrikaans heritage, she added a subtitle that summed it up in her mother tongue: ‘Met liefde en passie’.

The change was remarkable. Stellenbosch residents returned, flocking to the new Café Meraki. With queues out of the door, Corlandi expanded into the neighbouring shop and opened an adjoining bagel café, the popular All Things Good.

Corlandi even met her husband André at Café Meraki when he – as a customer on the stoep – complained about waiting too long for his food. Corlandi’s sharp response quickly put him in his place and sparked a discussion about her consulting his hospitality businesses. A coffee meeting turned into a dinner, romance blossomed and within a year the pair were married.

Expansion into a second venue saw Café Furlough opening up as a more upmarket version of Meraki, but before Corlandi could make it sing – “It was a beautiful café, but despite our best intentions it never really flew – Covid-19 hit. We were forced to give up our rental premises in Ryneveld street in the early months of the pandemic. For the next 17 months of different stages of lockdown I hustled to keep the doors of Café Furlough open and to retain most of my staff. In August 2021, our lease for those premises came to an end and the reality hit. I had to pack up eight years of work. It was devastating.” 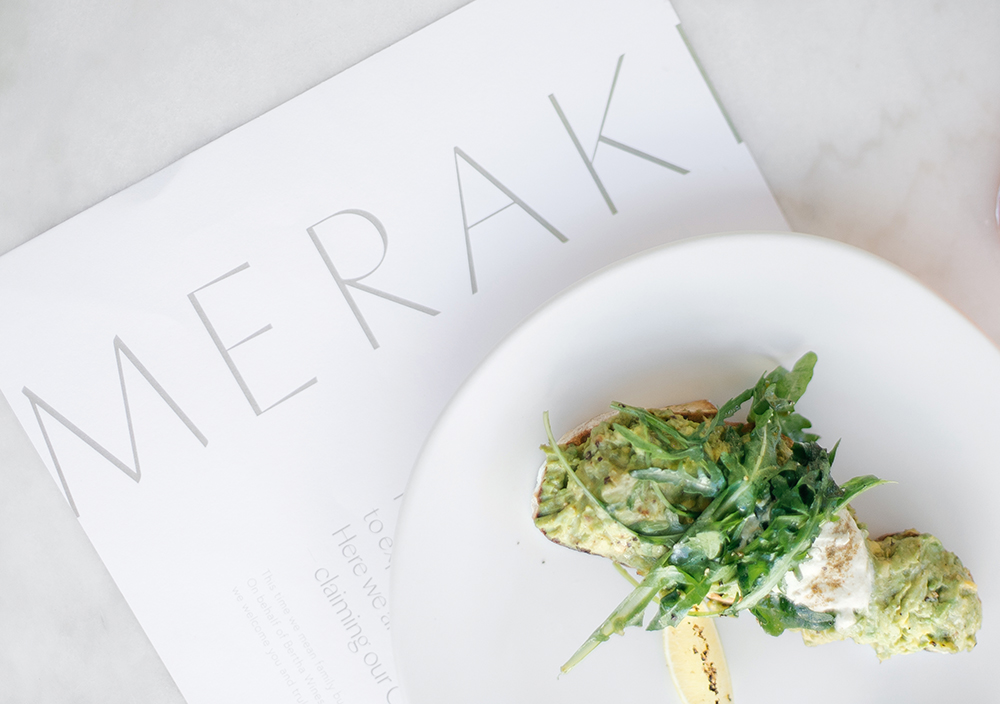 But then came the chance for renewal. “In February 2021, André came home and told me, ‘I’ve bought premises and we are re-opening Meraki’.” She smiles at the memory. “When we shut down I used to refer to Meraki as a Covid-19 casualty, but now I see it as just a Covid-19 sabbatical!”

The new space, on the corner of Church and Ryneveld Streets, was an opportunity for Corlandi to reinvent the Meraki concept, polishing the menu and making her patrons’ experience more like what she had long dreamed of. But before the first cortado – Corlandi’s signature coffee – could be poured, the space needed major renovation.

Set across the road from the Stellenbosch Museum, the new Café Meraki rests in the historic heart of the town, on what were the very first streets laid out in Simon van der Stel’s time.

“Because we’re right at the foot of the Moederkerk and opposite the museum, I wanted a space that really reflects the beauty of the heritage surrounding us.” Nods to that heritage are subtly woven into the architecture and design of the space, from herringbone klompie pavers to the softening of Meraki’s all-white aesthetic to dovetail into the traditional architecture of the town.

“I’m a bit of a francophile, so I wanted to bring in French touches without being clichéd,” adds Corlandi. “It’s very important for me to create an elegant space that also stays true to what Meraki used to be, within its heritage surroundings.”

With support from the local municipality who bought into the vision for the café and what it would bring to Stellenbosch, the premises were allowed to spill over onto wooden decks that wrap around the corner, expanding the space and creating a bustling pavement-chic addition. 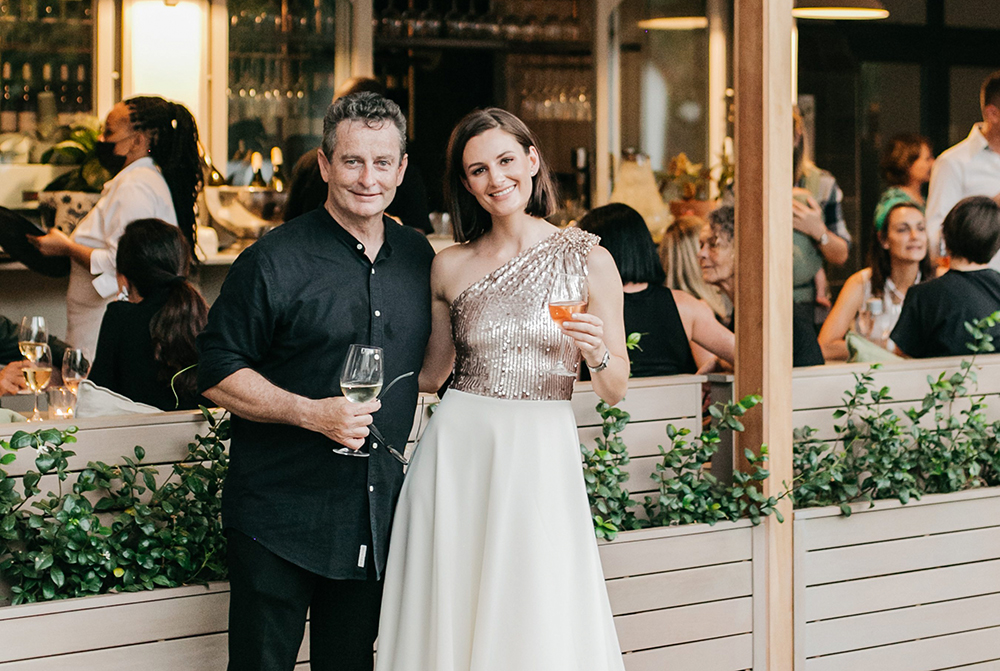 And the café certainly buzzes, with crowds of savvy locals and curious tourists pulling in for the great coffee, freshly baked cakes (see sidebar) and light café fare.

“In style and price, the food must make you want to be here every day,” says Corlandi.
“Today for a coffee, tomorrow for lunch, then a glass of wine. I love seeing the same faces over and over again. And I really think we’ve achieved that with the menu. It’s healthy. It’s abundant.”

For breakfast, the sleeper hit is the Hemelskos, inspired by Hemelhuijs in Cape Town, which sees poached eggs and artichoke hearts served atop toasted mosbolletjies and coated in silky hollandaise sauce. Come lunchtime, the salt and pepper squid is the hero, the garlic aioli neatly balanced by peppery rocket and cubes of lusciously sweet mango.

But Café Meraki is also a space of two distinct characters. After 4pm, the focus shifts away from café plates as the space melds into Bertha Wine Bar.

Corlandi and André Bezuidenhout live on Weltevreden Estate in a 220-year-old Cape Dutch manor house. During lockdown, they noticed five hectares of grapes on a neighbouring property were not being used.

One thing led to another and before long the family – driven by André’s older children, Jandré and Imke – was in the wine business. Today the Bertha portfolio, named in honour of André’s late mother, is made by Bennie Booysen and Bernard le Roux at the Zorgvliet cellar.

“We’ve brought Bertha to town with us where we can switch from being a daytime café into more of an evening space,” says Corlandi. “We’re Meraki by day and Bertha by night. We give it new energy.”

At Bertha, wines by the glass or a proper tasting can be paired with a selection of wine-friendly tapas plates, including a delectable pastry-wrapped Dalewood Camembert baked with honey and figs. The menu changes too, with more sophisticated light meals served until 8pm. The tapas plates are ideal for a light bite with a glass of wine, or you can stop in for an early dinner of the signature 200g Plankie Steak seared, sliced and served with refreshing chimichurri. “This is my perfect Church Street meal,” says Corlandi,
with a smile.

And judging by the crowds of happy diners on the deck that morning, Café Meraki is the perfect addition to Church Street, a little slice of love and passion, a place to gather and feast, all in the historic heart of Stellenbosch. 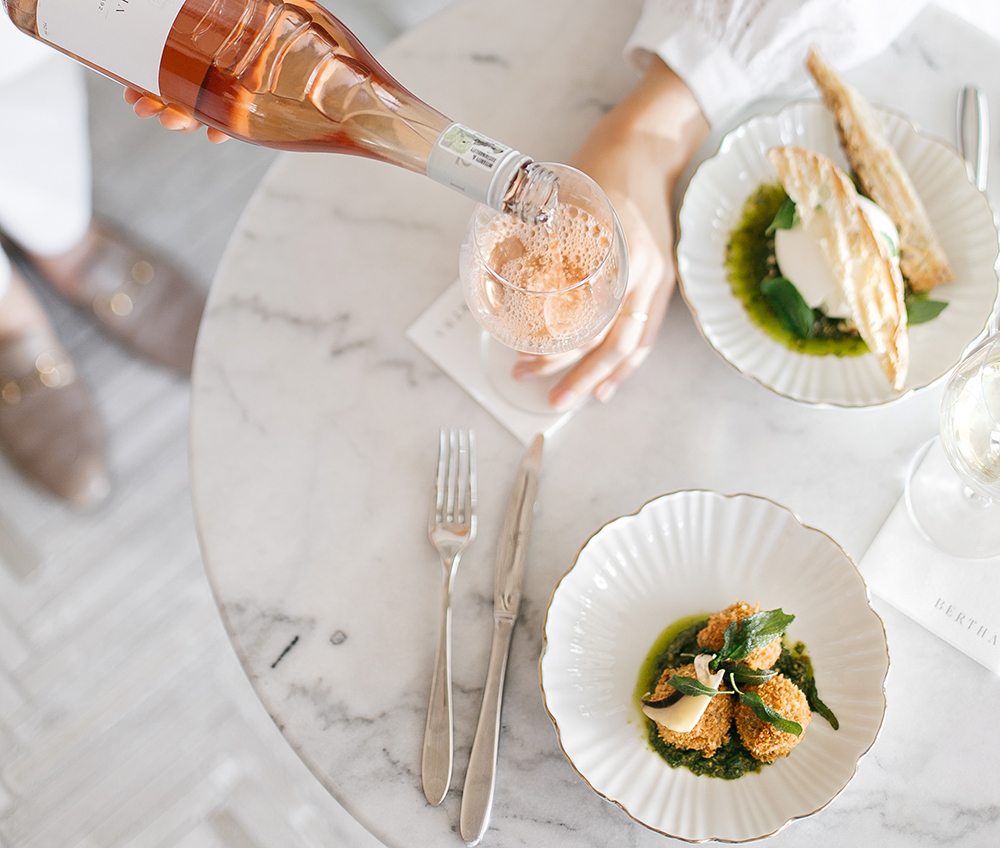 As well as Café Meraki, Corlandi runs Blos Bakery and Marnella Art du Macaron. Blos was borne out of guests wanting to order whole cakes from the café. “We simply couldn’t bake enough for the café in our tiny kitchen. So we set up a separate bakery on the family farm to cater for demand,” says Corlandi. “We bake for weddings, birthday parties and events. The demand has just been incredible.”

The bakery also produces the beautiful Marnella macarons, available in flavours ranging from Earl Grey to elderflower and elegantly packaged in beautiful white – of course – gift boxes. Could a macaron store be coming to the streets of Stellenbosch soon? Watch this space.

Experience the great outdoors on a gravel bike