Porsche has big plans for the youngest member of its all-important SUV family. Ian McLaren has driven the recently revised Macan range ahead of its exciting future.

While recalling Hans Christian Andersen’s tale about the ugly duckling may be a touch harsh, it’s safe to say that Porsche’s first ungainly splash into the SUV pool in 2003 was looked at askance by the competition and the fans of a brand famous for its low-slung sports cars. And yet, the introduction of the Cayenne with its raised ride height to Porsche’s portfolio would soon prove to be a masterstroke in terms of global sales and, crucially, profitability.

Currently in its decidedly more fluid-looking third generation, the Cayenne was joined by its compact sibling, the Macan, in 2014. Together, Porsche’s family of SUVs continues to add critical volume to the Stuttgart-based manufacturer’s order books. Production of the Cayenne surpassed the one million mark in 2020 and the Macan has recorded more than 600,000 sales to date.

In anticipation of the current Macan being sold alongside an all-electric successor by 2023, Porsche recently gave the range a mild refresh.

Sharing its Volkswagen Group underpinnings with the Audi Q5, the Macan is rightly viewed as the more dynamic member of the family. Revisions to the already svelte exterior styling include an updated grille and bumper design, with a neater incorporation of the front air intakes. The rear diffuser that houses the exhaust system’s tailpipes has also been reimagined, while a new 3D, textured side blade design makes the car’s profile appear that much leaner.

Together with a wide selection of exterior colour options, Porsche has added seven new wheel rim designs – ranging in size from 18 to 20 inches – to the Macan’s online configurator tool. Also new is the option to include upholstery stitching to match the car’s exterior colour. An upgraded 10.9-inch touchscreen infotainment display offers haptic feedback for improved convenience, while a redesigned centre console provides more storage options for small items than in the outgoing model.

A favourite addition to the Macan package is the option to include the beautifully crafted steering wheel currently found in the 992-generation 911.

So why has Porsche so far resisted the urge to follow the trend for coupé-style compact SUVs like the BMW X4 and Audi Q5 Sportback? The reason, perhaps, is that the standard Macan already does a fairly convincing job of looking fast on its feet and it does so while still providing a well-considered and broadly comfortable interior and a generous amount of packing space. 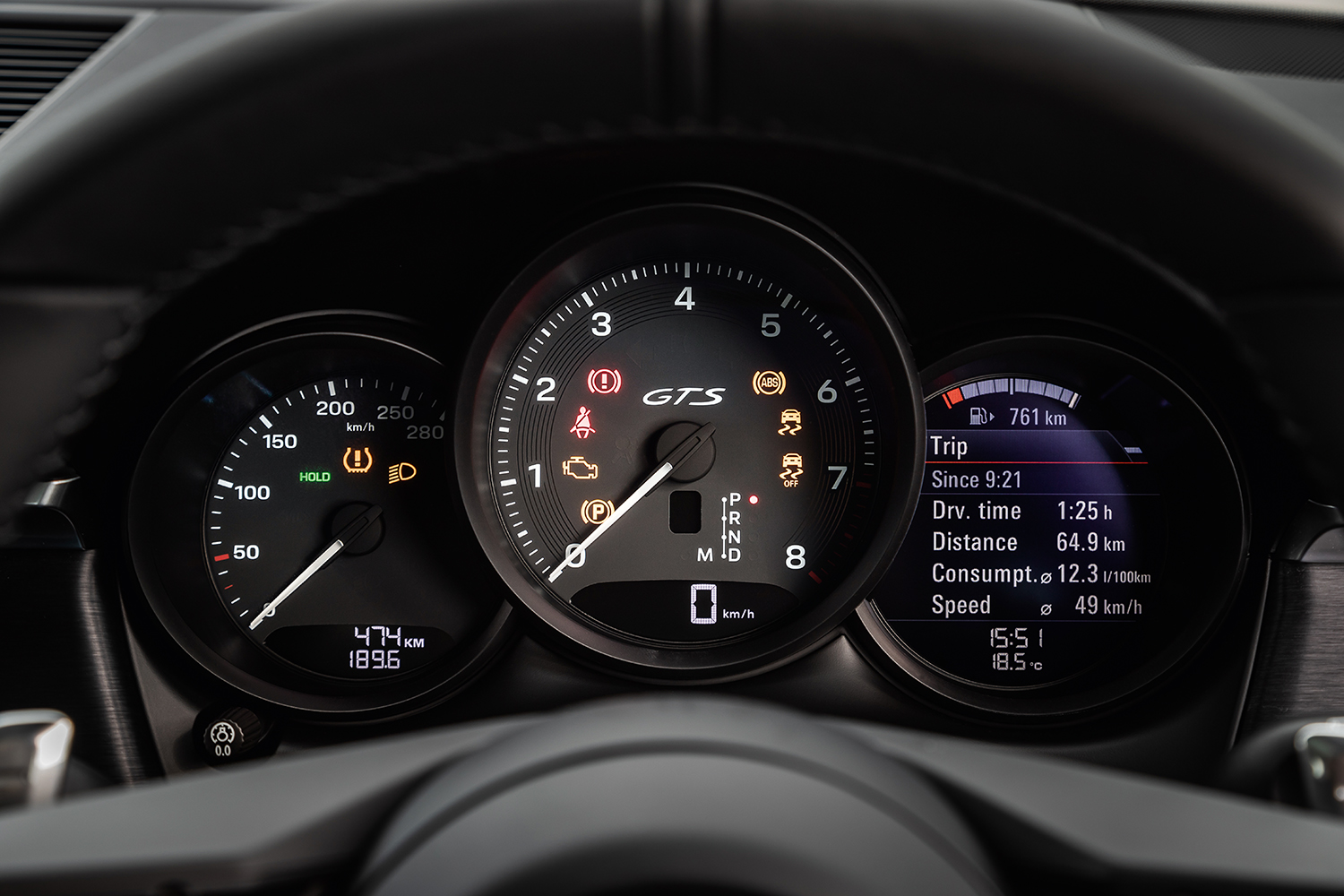 Providing a compelling welcome into the world of Porsche, the entry-level Macan is fitted with a 2.0-litre turbo-petrol engine that guides 195kW and 400Nm of torque to all four wheels via a seven-speed dual clutch (PDK) transmission. With an optional Sport Chrono package fitted, this model is able to launch from 0 to 100km/h in less than six seconds. The appeal of this ‘smaller’ engine, of course, is a corresponding claimed average fuel consumption of less than 9.0 litres/100 km.

The Macan S can reach 100km/h from standstill in just 4.6 seconds, courtesy of the brand’s twin-turbocharged 2.9-litre V6 engine, which is tuned to deliver 280kW and 520Nm of torque. Also mated with a PDK transmission, this middle-of-the-range model gains as standard the Porsche Active Suspension Management (PASM) for continuous adjustment of the car’s ride quality to suit prevailing driving conditions.

Short for Gran Turismo Sport, Porsche’s reimagined GTS badge has in recent years come to represent models with a carefully curated selection of upgrades compared to their respective base derivatives, appealing to a customer keen to experience more than a hint of this brand’s motorsport heritage. These derivatives are generally easily identified by their black alloy wheels and badging, as well as tinted light clusters. This treatment extends to the new Macan GTS in the form of black 21-inch alloy wheels and includes a glossy black finish on the side blades.

This model is also 10mm lower than the Macan S and features a new sports suspension set-up as standard. Still impressively compliant, the GTS offers an altogether firmer, more focused ride quality in comparison with the other two available derivatives.

Having inherited the 324kW/550Nm bi-turbocharged V6 petrol engine from the outgoing Macan Turbo, the new flagship car is capable of a 4.3-second 0 to 100km/h dash, with a top speed of 272km/h.

Over and above these figures, though, it’s the accessibility of this performance from the modern drivetrain that sets Porsche apart from many of its rivals. Impressively refined and happy to cruise when required, this particular SUV instantly draws upon its performance-focused heritage by means of a simple toggle of the drive mode switch mounted on the steering wheel. Feeling lighter on its feet than the scales suggest, even the entry-level Macan is capable of sure-footed turn-in and a secure blast away from any kink in the road.

Naturally, the two V6-powered models boast the more compelling soundtracks to match this enthusiasm, best enjoyed via the sports exhaust system (standard on the GTS). 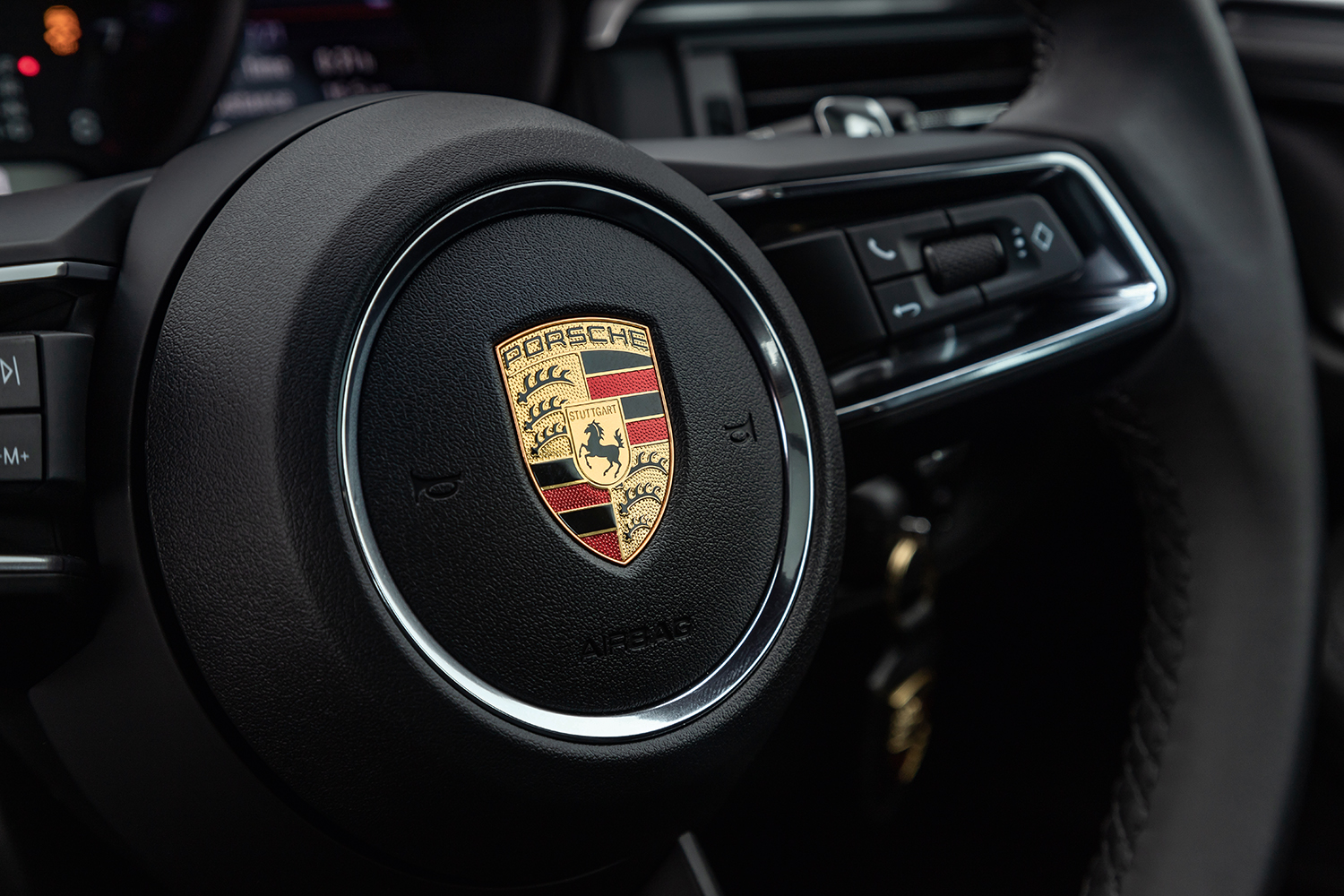 Even when the first-generation Cayenne and Porsche’s first four-door executive sedan endeavour, the Panamera, broke the mould in terms of styling, it’s to this German brand’s credit that neither of these hugely successful packages could be criticised for their respective under-the-skin engineering or for their performance-focused DNA.

With about 80% of Macan sales to date going to first-time Porsche customers, the continued development of this model – including through its confirmed electric future – remains a massive priority for its maker. While mandated to tick as many boxes as possible in terms of its compact SUV packaging, the Macan sets itself apart in that even at entry-level specifications, it delivers breadth of ability, from everyday usability to pressing on with sure-footed confidence. And it is on this that Porsche has built its legacy.

Destined to be sold alongside the current petrol-powered range, the next-generation, all-electric Macan is set to arrive by 2023. It’s built on the VW Group’s new PPE platform that Porsche will share with sister brand Audi and is likely to be more coupé-like in terms of its profile, helped by the absence of an internal combustion engine up front. Expect the interior to feature the brand’s latest-generation communications and infotainment technology, while the inclusion of a significantly more compact transmission lever, as seen in the Taycan, should free up space for both comfort and storage. An evolution of the already impressive underpinnings featured in the Taycan, the all-electric Macan is expected to offer a driving range of more than 500km between charges.