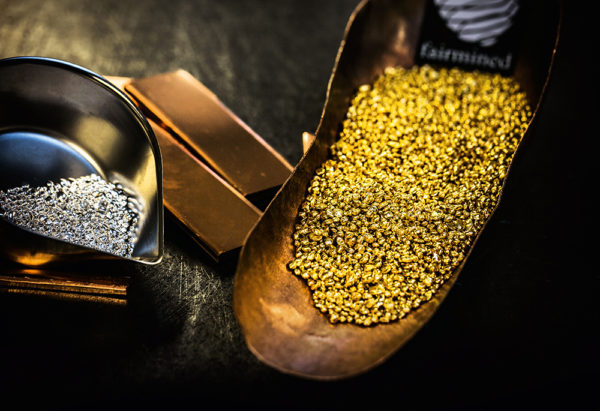 If you’ve embraced the ‘recycle, reuse, reduce’ philosophy and have a system going you can work with, you’re already a fair distance along the road to lifestyle change. Whether this applies to managing waste at home or how you choose to acquire goods of any kind, even jewellery (think ethical sourcing, packaging, environmental impact and transport logistics), these are habits that start – like everything else – with one small step. 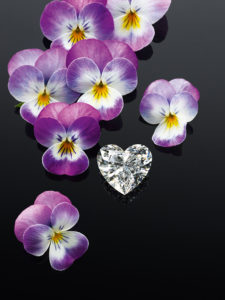 In 2019, luxury fashion retailer Net-a-Porter launched a new platform, Net Sustain, which profiles fashion and beauty brands that follow best practice when it comes to human, animal and environmental welfare. And the Kering Group led 32 fashion and textile brands – including Chanel, Hermès, Kering and Ralph Lauren – to sign a Fashion Pact in which they jointly committed to achieving practical objectives in three areas: climate, biodiversity and oceans.

A mere four months after French presi­dent Emmanuel Macron tasked Kering chairman and CEO François-Henri Pinault with bringing together the leaders in the fashion, jewellery and textile industries to determine the way forward for reducing their environmental impact, the pact was signed. It was presented to heads of state during the G7 meeting at Biarritz in August 2019.

The Kering Group, which incorporates Girard-Perregaux and Ulysse Nardin, has been moving towards sustainable luxury since 1996. “Luxury and sustainability are one and the same,” states François-Henri. The group was ranked the second most sustainable company across all sectors in the 2019 Corporate Knights Global 100 and topped the Textile, Apparel and Luxury sector for the second consecutive year.

“The watch and jewellery sector has made a significant contribution to social prosperity and economic growth in Switzerland and is an important representative of the country’s culture and history, with its pioneering spirit, precision and long-lasting tradition,” says Dr Gianina Viglino-Caviezel, an expert in sustainability management and the author of the foreword to the WWF Watch and Jewellery Report 2018. “In its role as one of Switzerland’s flagship industries, the position of the Swiss watch and jewellery sector is one of great responsibility, providing those within the sector the opportunity to consciously generate a positive impact on society, nature and the economy. This is essential if broader development objectives, like the UN Sustainable Development Goals, are to be achieved.”

According to a WWF report, Switzerland is the global leader in the gold refining market. Roughly half of the largest luxury watch brands are Swiss and between 60% and 70% of globally mined gold physically travels to Switzerland to be refined (about 2 400 tonnes in 2017). “The industry uses over 50% of annual gold production (more than 2 000 tonnes),” says the report, “and in most cases the companies are not able to demonstrate where their raw materials come from and that they were not responsible for dramatic environmental degradation and human rights violations.”

When WWF Switzerland conducted a review examining the environmental impact of leading Swiss watch companies, Chopard and TAG Heuer were among the top performers. According to a Forbes magazine article, Chopard defines ethical gold as coming from either artisanal small-scale mines that participate in the Swiss Better Gold Association’s Fairmined and Fairtrade programmes, or gold sourced with the Responsible Jewellery Council’s (RJC) Chain of Custody certification through the maison’s partnership with RJC-certified refineries.

Chopard, in partnership with sustainable consultancy Eco-Age, started The Journey To Sustainable Luxury in which they “forged a strategic bond with the Alliance for Respon­sible Mining (ARM), the NGO operating in Latin America with small-scale mining communities”, says Livia Firth, the founder of Eco-Age. “It would have been very easy for Chopard to just source through them the available amounts of Fairmined certified gold, but Chopard went beyond that and actually supported ARM in bringing more mining communities to Fairmined certification. That meant the amount of gold increased over the years.”

This is one way Chopard is able to source 100% ethical gold. The other is by having its own in-house foundry, which contributes significantly to the company’s commitment to the vertical integration of its production. “Obviously (the foundry) makes a huge difference, as it adds lots of value to being a sustainable business,” says Livia. “Having it in-house also means Chopard can fully control the process and recycle its own gold.” 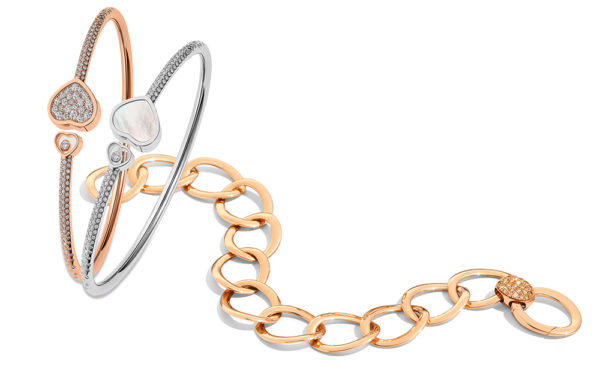 In Italy, meanwhile, Milanese jeweller Pomellato sources only 100% responsible gold and continues to make choices in materials that minimise its impact on energy consumption and the environment. The ethical sourcing of raw material is an obligation for the brand. One hundred per cent responsible gold sourcing was achieved in 2018. Pomellato is actively working to build a traceable and transparent sourcing for diamonds through collaboration with diamond suppliers (Pomellato is certified by the RJC), and is also developing an alliance with suppliers to investigate the traceability of coloured stones.

Founded by Pino Rabolini, a Milanese entrepreneur who hails from a family of goldsmiths, Pomellato introduced the prêt-à-porter concept to the world of jewellery in 1967. The company is working to preserve the cultural and historical heritage of jewellery-making in Italy, the home of the goldsmith ‘genius’, by offering professional training in collaboration with the Galdus Goldsmith Academy in Milan. The goal for Pomellato is to make all inside knowledge available, from the designers to the goldsmiths, and to build on education programmes that will support young talent and ensure the transfer of Italian savoir faire to future generations.

What makes every Pomellato chain special is that it is imagined, designed and prototyped with an in-depth knowledge of the traditional method of creating handmade chains. “Although we produce chains using different methods (whether it be the ancient lost wax process or more contemporary techniques), all our chains carry, in the aesthetics and in the typical Pomellato flavour, the original magic of human gestures,” says Pomellato crea­tive director Vincenzo Castaldo. 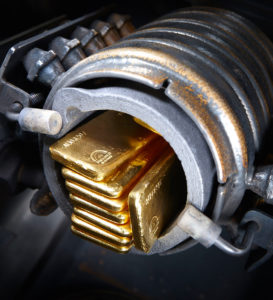 Multinational luxury goods conglomerate LVMH has been assuming responsibility for exemplary performances in all aspects of environmental sustainability for almost three decades. Since 2012, it has been running its LIFE (LVMH Initiatives For the Environment) programme, which is implemented in the sourcing of raw materials, product conception, production and retail operations of all 75 maisons. By the third quarter of 2019, the group had achieved 99% of its 100%
objective for RJC certification of diamonds used by 2020.

“We believe that environmental performance is a source of innovation, creativity and excellence and as such must be considered in all design and manufacture activities,” says Bernard Arnault, the chairman and CEO of LVMH. “For the past 27 years, LVMH has continually anticipated changes and adapted production processes, work habits and behaviours to find better solutions to the many environmental challenges we face. The results speak for themselves. We are committed to accelerating our work in that field and to going even further.”

With conglomerates such as these leading the way in sustainable practices that smaller operations may not be able to afford, concerned jewellers are applying their minds to ethical and responsible sourcing and methods that add value to the lives of others while minimising harm to the planet. It’s up to the consumer to support those who are trying to make a difference. 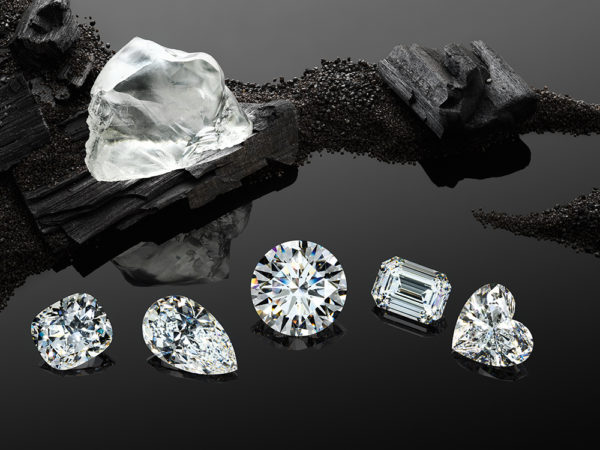 The Fashion Pact’s objectives draw on the Science-Based Targets (SBT) initiative, which focuses on
action in three essential areas for
safeguarding the planet:

• Stop global warming: by creating and deploying an action plan for achieving the objective of zero greenhouse gas emissions by 2050, in order to keep global warming below a 1.5°C pathway between now and 2100.

• Restore biodiversity: by achieving objectives that use SBT to restore natural ecosystems and protect species.

• Protect the oceans: by reducing the fashion industry’s negative impact on the world’s oceans through practical initiatives such as gradually removing the usage of single-use plastics.

Chopard aligns the value of luxury goods to the well-being of people and the planet. The maison supports several non-profit organisations by donating a percentage of sales from special editions of its iconic creations. As Chopard states: “Little diamonds do great things.” Buoyed by the idea that the attention we devote to ourselves must never be at the expense of others, the Happy Hearts collection unites big-hearted women worldwide.

The Chopard heart symbol depicts the radiance of happy days. These diamond-set bangle bracelets come in 18-carat white gold or rose gold with a heart in mother-of-pearl or set with diamonds. Both have a second heart featuring a playful dancing diamond.