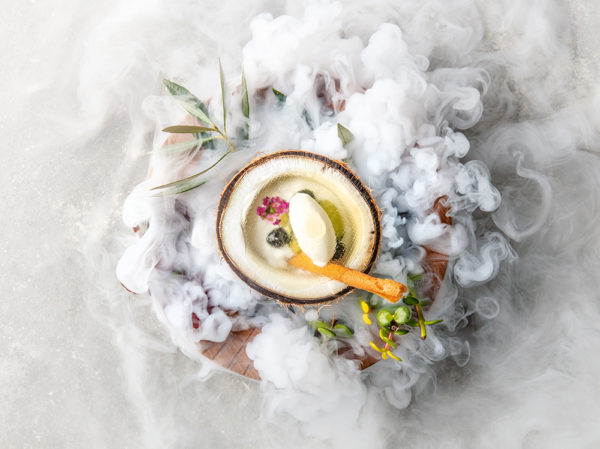 “I see each plate as a canvas. Every dish is a drawing that begins with an image in my head. I picture a plate, how I want it to look, then I work backwards to create it using ingredients and flavours.”

Artistry and adventure on a plate is a fair way to sum up the culinary experience at Gåte restaurant on Quoin Rock Wine Estate, high on the Knorhoek Road as it makes its way up the Simonsberg. Head chef Nicole Loubser may be only 25, yet she already shows a remarkable depth and adventurous spirit in her cooking.

Since graduating from the Institute of Culi­nary Arts in 2016, Namibia-born Loubser has wasted no time in stacking her CV with some of the brightest names in the culinary world. Locally she’s worked apprenticeships at both La Colombe and The Test Kitchen, along with stints at a number of trendsetting European restaurants, including one at chef Jan Hendrik van der Westhuizen’s Michelin-starred restau­rant in Nice.

Back in South Africa, she was working in another Cape Winelands kitchen, when an opening at Gåte piqued her interest. Nicole joined Quoin Rock as sous chef in September 2018 and just a few months later, she took over the reins as head chef.

While the kitchen’s dedication to contemporary experimental cuisine continues, with Nicole in charge of the kitchen the menu has subtly shifted focus. It’s retained its modern edge and still celebrates fresh local ingredients from regional farmers and suppliers.

Produce, creativity and experimentation feed directly into the dining experience at Gåte, a conversation between artistry, culi­nary traditions and the technical craft of the chef. It’s also influenced by Nicole’s own travels, with the menus structured as a journey through flavours and plates inspired by specific countries around the world. 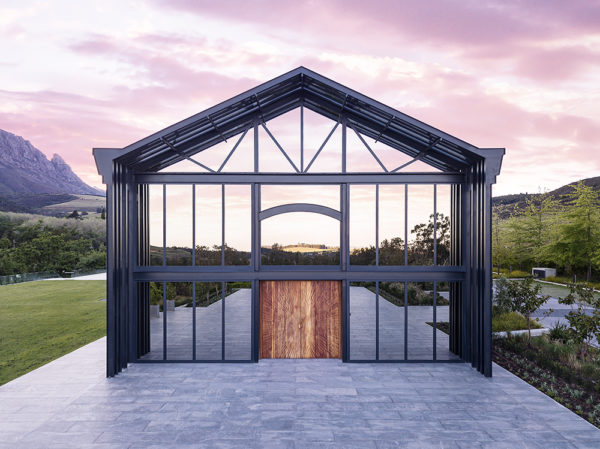 Nicole loves to take diners by surprise and perhaps few plates accomplish that more deftly than the first Italian plate on the menu. A macchiato and cigar may usually mark a fine end to a meal but rarely do they feature at the beginning.

As with so many of the dishes here, everything is not as it seems. The smoke billowing from a glass cloche clears to reveal a smoked paprika espuma topped with ash. Dip the cigar – made of crisp potato bread – and take a sip of the coffee; a deeply flavoured tomato soup with black garlic and a thyme espuma. It’s playful, innovative and utterly memorable: a feat of originality.

Not all dishes are as mind-bending as this but there’s certainly no shortage of creativity and surprise as you move through the multi-
course tasting menu.

The caprese salad is equally striking and a quiet riot of flavour and textures. Here, a dome of frozen whey comes topped with shards of meringue in tomato dust. Catching the diner by surprise, the waiters deftly smash open the dome to reveal a medley of tomatoes. On the side, a wedge of basil sponge cake is ready for you to mop up the basil-infused whey that is heated at the table and poured over the dish.

The wine list is limited to the wines of Quoin Rock but that’s certainly no hardship. Since the Gaiduk family took ownership in 2012, enormous effort has been poured into rejuvenating and replanting the vineyards, and the result is evident in the stellar range of wines from consultant winemaker Chris Keet and viticulturist Nico Walters.

With the Simonsberg particularly famous for its Bordeaux cultivars, the Cabernet-driven Quoin Rock Red Blend is one of the standouts, and a fine pairing for the Austrian dish of lamb croquettes with smoked Stanford cheese.

Burgundy makes an appearance here, too, with a superb Quoin Rock Chardonnay made in the Chablis style, as does the Rhône Valley in Quoin Rock’s big, bold Shiraz. With savoury fruit and an undercurrent of spice, it pairs beautifully with medallions of oryx. For a true taste of the estate, opt for the wine pairing with each course. 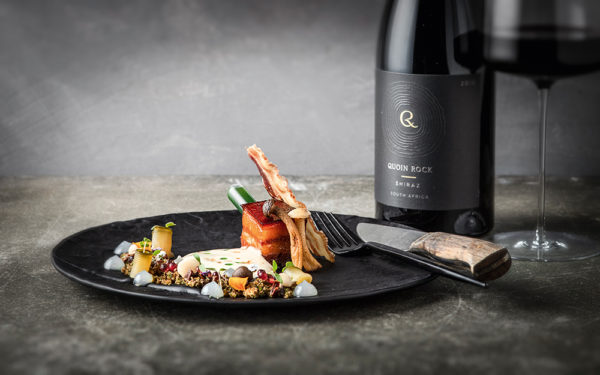 While lunchtime offers an accessible taste of what Gåte has to offer, the full journey is best discovered in the evening; an immersive expe­rience with the chefs out on the floor, plating and tweaking tableside and delivering an invi­tation to enjoy a palate cleanser in the kitchen.

And it’s worth leaving your seat to admire Nicole’s domain. The purpose-built kitchen is a hyper-modern space boasting everything from centrifuge machines to sous-vide baths. Dominating one wall, a hydroponic system provides seriously fresh micro-greens.

You may spot them on plates such as Nicole’s Namibia dish honouring her country of birth, a fine example of her edible artistry. On a bed of dukkah, a poached egg yolk masquerades as carrot to catch first the eye and then the palate unawares.

“The element of surprise is quite impor­tant to me,” says Nicole, who loves to play with foams, espumas, pearls and spheres to dabble in both texture and taste. But she’s adamant flavour comes first. “If the molecular element doesn’t work on the plate, we’ll step back to a more conventional dish. If it won’t make it taste good, we won’t use it.”

The setting is just as mesmerising. Solid wood tables are by master craftsman Pierre Cronje, while bronze vine-inspired artworks by Charles Haupt draw attention to the glass walls into the barrel maturation cellar.

Haupt’s vine motif is mirrored outdoors on the terrace, where the design of the laser-cut metal pergola mimics the shape of vine leaves in a truly modernist fashion. Whether you’re seated here or indoors, tables boast glorious views across vineyards racing up the flanks of the Simonsberg.

There’s natural beauty in abundance here, no doubt, but for hungry diners seeking boundary-breaking cuisine, all eyes at Gåte this autumn will surely be on Nicole Loubser’s edible artistry.

What’s in a name?

Wondering about the estate’s unusual name? Quoin Rock’s sister farm, Boskloof, is situated on the Agulhas Plain, not far from the rocky Quoin Point, the second-most southerly point in Africa. Today, Boskloof is largely given over to conservation, though some cool-climate fruit is used in the Bordeaux-style Quoin Rock White Blend comprising Sauvignon Blanc and Semillon.

Make the most of your visit to Stellenbosch by sleeping over – click here to view a list of our town’s finest hospitality establishments.
Previous Article

Things to do this weekend in the Winelands

Paul du Toit whispers to the soul with “Modern Primitive”