Motoring
2 weeks ago
by Stellenbosch Visio
0

Motoring scribe Dieter Losskarn test drives various all-wheel-drive SUVs suitable for both bush and boulevard. Some are underrated, a couple are legends. 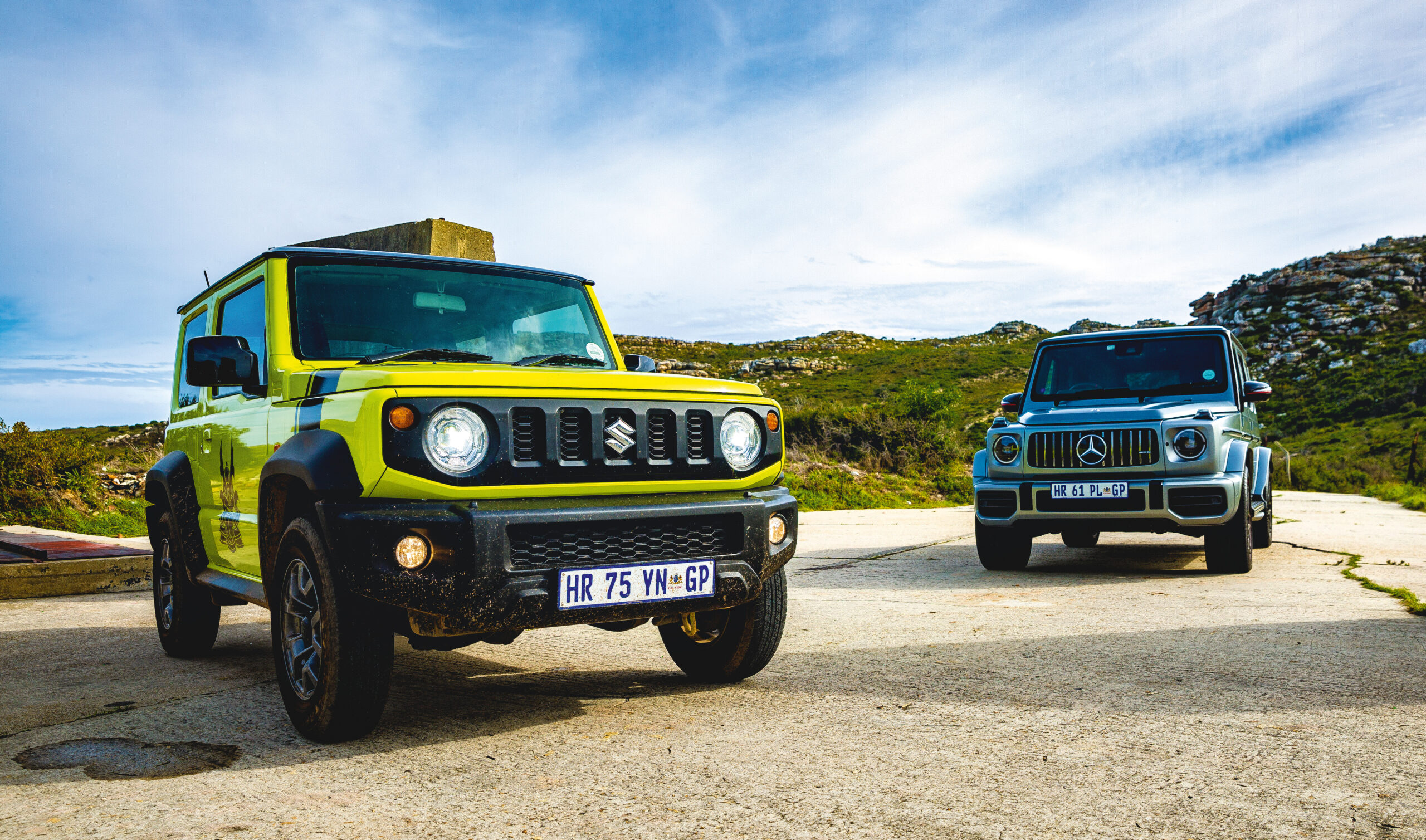 When the legendary Mercedes Geländewagen, or G, celebrated its 40th birthday in 2019, Suzuki brought the perfect gift to the party: a mini G. Many people couldn’t help but fall in love with the boxy heartiness of the shrunken G. It’s also the most affordable real 4×4 available in South Africa. The genuine G not so much, but we’ll come to that later. Let’s have a look at its reduced copy first.

Rear-view parking camera, lane departure assist and dynamic ride control are some of the features the fourth-generation Suzuki Jimny does not have. They aren’t necessary. The Jimny is an old-school off-roader in a trendy package, a lifestyle vehicle with gen-
uine off-road capabilities, proving that cheap and small can be cool as well.

When a G wagon and a Mini have some unprotected fun, a Jimny will be the result. And while the previous model looked rather feminine, the current Jimny is anything but. So how much of an off-roader is it really? Well, first of all you’ve got no electronic switches for four-wheel drive and low range. Instead, there is a good old shifter underneath the gear lever. Then it has a sturdy ladder-frame chassis for solid off-road performance, yet still weighs only 1.3 tons. From rear-wheel drive you can switch to 4×4 at speeds of up to 60km/h, although to manually engage low range you have to stop. The mini G features hill hold assist as well as hill descend control. The short overhangs are even better than those of the legendary Jeep Wrangler.

When I checked it out on a private 4×4 track the Jimny fared awesomely, even on the most difficult and deeply rutted red routes, the ones for advanced drivers. Some places were so steep and slippery I could barely reach them on foot, but this little one just crawled up in low range.

The new model pays homage to the old ones, with those heritage round head lights, albeit LED-lit, and the grille resembling that of a Mark III. And still typical after all these decades is the full-size spare wheel on the tailgate. Despite the classic feel, the interior is contemporary, featuring for instance, a seven-inch touchscreen. With the new Jimny, Suzuki has avoided the cross over softie route taken by most of the 4×4 competition. 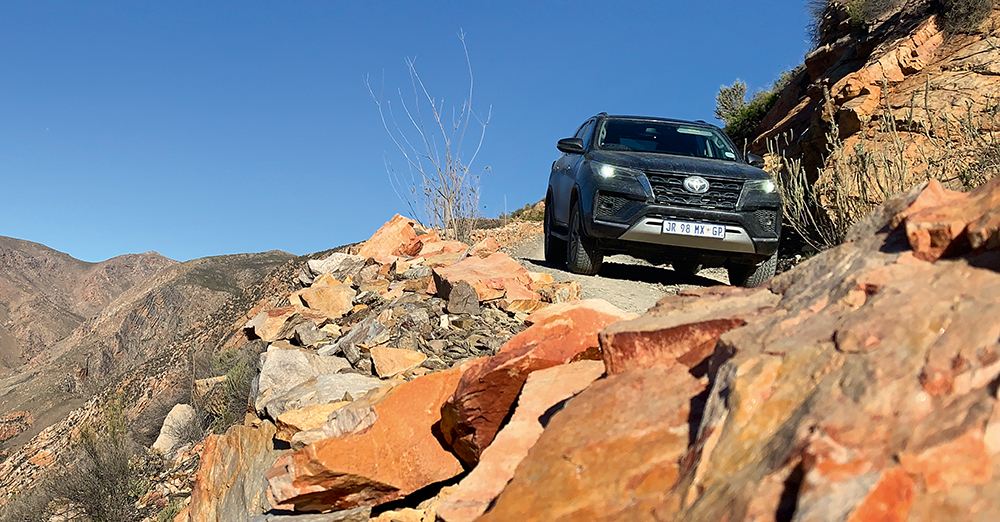 Let’s go a bit bigger now. South Africa’s best-selling off-roader is still the Toyota Fortuner, which is based on the equally popular Hilux bakkie. I took them both on extended road trips into the Karoo, with some heavy off-roading thrown in. And they performed flawlessly. No wonder they’re so popular. The Fortuner is without a doubt the best and most affordable family 4×4 in South Africa. 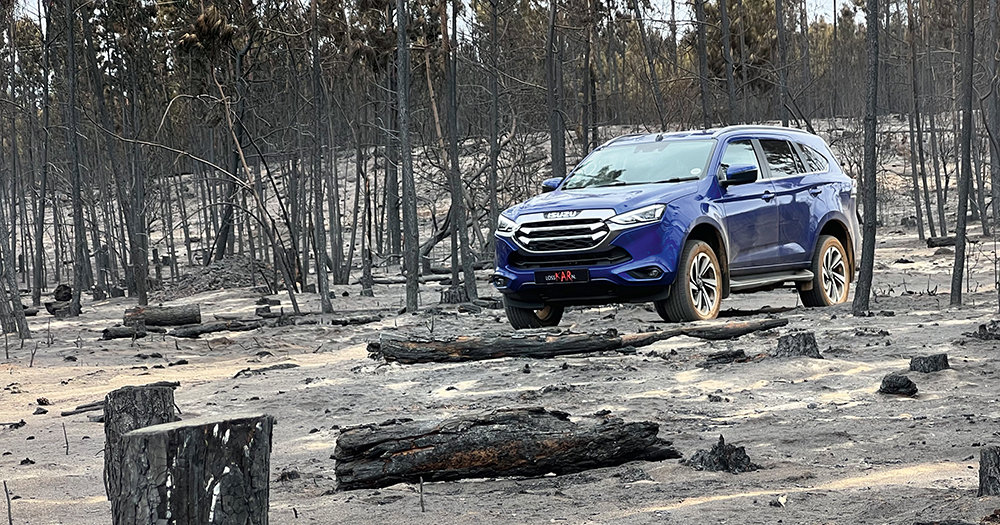 But it is definitely not without competition, underrated though this may be. I’m talking about the recently introduced Isuzu MU-X and the Mitsubishi Pajero Sport, which are similar in size and looks and in their off-road capabilities. I took the Isuzu down into Die Hel and back a couple of weeks ago and was very impressed.

However, while those three are very capable and reliable off-roaders, they’re not exactly legends. So if you are a real car person and you want to demonstrate this fact in your 4×4 choice, you have to go for one of the next three. 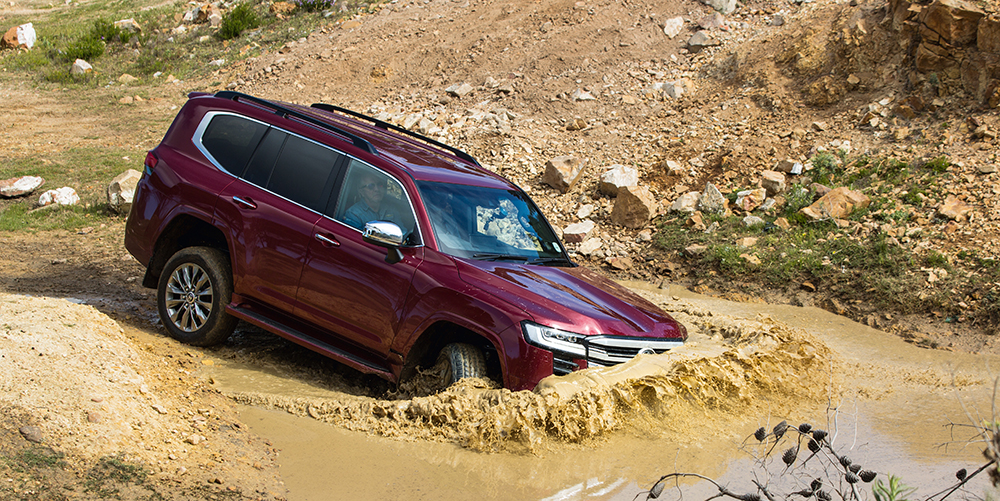 Let’s go back to Toyota for now. If you ask anyone, even someone not really into cars “What is a real 4×4?”, they will most probably come up with the Mercedes G and the Land Rover Defender. And the Toyota Land Cruiser, whose seven-decade heritage has seen it being named the master of Africa and the king of off-roaders. But is this still true for the first new Land Cruiser model in 14 years?

Of the two versions available in South Africa, the fancy and flashy ZX – with a huge grille and 20-inch wheels – is obviously intended for the USA and the Emirates, its main markets. This is a ‘Land Cruiser light’; although it can do the odd dirt road and water crossing, it feels definitely more at home in Sandton or on Camps Bay Boulevard. With its higher specifications, the GR-S version of the LC300, boasting lots of leather, GR-S stickers everywhere and 18-inch wheels, is a more capable off-roader, but is restricted by its large running boards below the doors. They reduce the ground clearance significantly and make rock crawling difficult.

Don’t get me wrong; both vehicles have a new multi-terrain select system with all the bells and whistles, from diff locks to crawl mode, so they can tackle any kind of off-roading but they’re restricted by their body add-ons. Both LC300s have lost quite a bit of weight, about 200kg in fact, but they still tip the scales at a substantial 2.5 tons. Rolling on a new platform and with a lower centre of gravity improving the on-road capabilities dramatically, the driving comfort and dynamics are on a par with the Mercedes GLS range. The new LC300 might have lost its mighty, naturally aspirated V8, but it got some powerful V6s instead, in a 3.5-litre turbopetrol and a 3.3-litre turbo-diesel. But if you want one now, you’ll be disappointed; there’s a long waiting period. 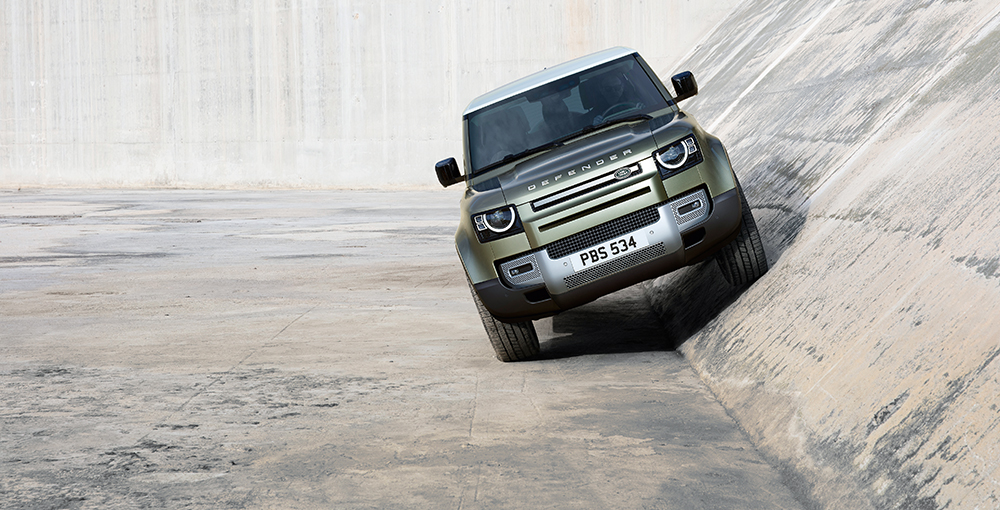 Although also extremely popular, the next icon is more readily available. As a youngster growing up in Germany, nothing symbolised Africa more than the square-edged Land Rover. But the old Defender was officially terminated on 29 January 2016, after more than two million units had been produced in the factory in Solihull, England. And then we waited, and waited, for Land Rover to develop a new one. Eventually, in 2019, the new Defender made its debut, proudly bearing the name and the wheelbase numbers, 110 and 90, of the old models. In looks it differs from the Discovery and the Range Rover, but the comfort level is the same. This is a stylish SUV with all the bells and whistles, including the latest terrain response system. And there are many subtle design elements proudly showing the DNA of the original.

I have experienced two variants of it: the Explorer, which is designed more for off-road adventures with its gorgeous white steel wheels and raised air intake (or snorkel); and the more fancy Dynamic pack with an emphasis on road use. Both come with diesel engines, the D240 featuring a 177kW/430Nm power plant and the D300 a much more lively 221kW/650Nm power plant, which makes it definitely the better engine. My perfect choice would be a Fuji White Explorer – like a Star Wars storm trooper – with the D300 engine, off-road tyres and steel wheels.

The 90 Explorer is an honest car, just like its grand-daddy, and you can sense the heritage of seven decades. After driving it extensively on and off the beaten track, I can say with conviction that this new Defender is still intrinsically a Defender. 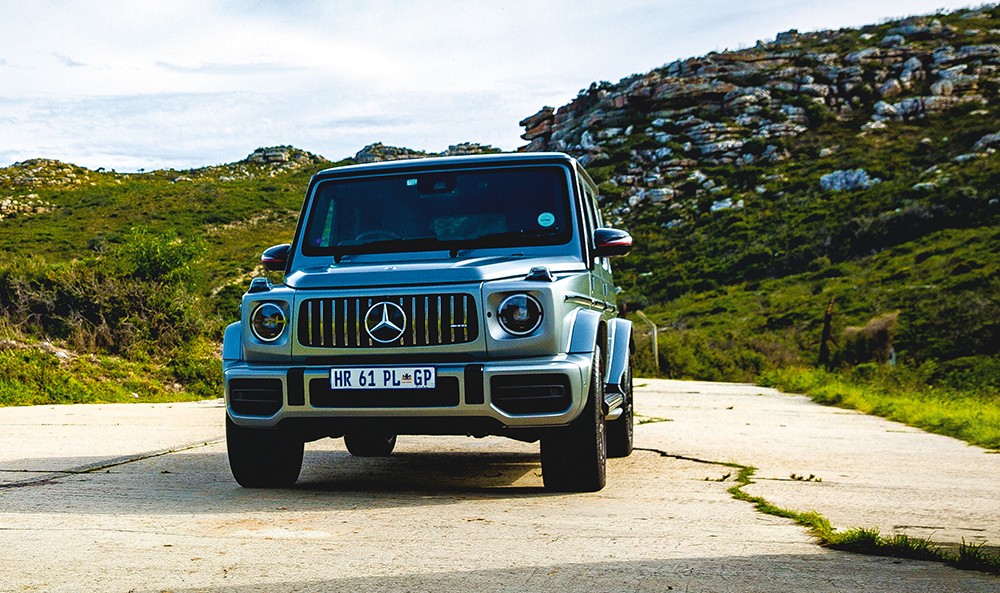 And now we come to the last one in the line-up, my personal favourite. The Keith Richards among off-roaders, still rolling over stones after more than four decades. I am obviously talking about the best 4×4 in the world, the legendary cultural icon: Mercedes G.

It is much easier to design a new car than to reinvent an iconic legend. But in 2019, Mercedes-Benz did the almost impossible. Forty years after introducing it in 1979, they saved the G, still handmade in Graz. The key G elements were retained: the boxy Bauhaus style, the characteristic door handles, the visible hinges and protruding turn signals, the self-locking clacking noise after take-off and the unique bank vault sound the door makes when thrown shut. And not forgetting the spare wheel bolted to the back door.

Performance, both on road and off, is even better. This G goes in a straight line on tar and around bends the steering is precise. All three 100% diff locks and the low-range gears were retained and the buttons are still clearly visible on the dash. The wading depth has increased by 10cm and is now a class-leading 70cm.

Mercedes-Benz South Africa introduced the new, mighty G 63 AMG first. When you look at its wheels, you know that taking it into the wild would be like walking up Table Mountain in high heels; possible, but not much fun. It was supposed to be followed by the G 500 and the G 350d, but then the pandemic happened and there were no more Gs for a while.

After skipping the G 500, the brand new G 400d finally made it to our shore at the beginning of 2021. And while the G 63 AMG – which I previously experienced in the new and old versions – is hilarious fun to drive on road, it’s this one, the G 400d, you would take on a trip to Namibia and drive off the beaten track. The 3.0-litre V6 turbodiesel is a smooth and agile dream engine and even on Clarence Drive I could overtake with ease, never once running out of forward momentum. It is one of the best oil burners you can currently buy.

The G 400d’s rubbers are great on tar for speeds just beyond 200km/h, but will they be able to tackle off-road obstacles? I found a really challenging obstacle course, with some red routes thrown in. At first glance they looked impossible, until the G simply annihilated them. Although, I had to use all three diff locks and first low-range gear in the end to conquer the course in its entirety.

It’s no wonder you feel invincible in a G. Sometimes you might even contemplate invading a small African country in it. If the world were to end now, this would be the vehicle to be in… if you can get one. Not only is it painfully expensive, but the extraordinary worldwide demand has forced Mercedes-Benz to halt orders for the G until the beginning of 2024 and that only makes this dream car even more desirable.

Experience the great outdoors on a gravel bike