When Marius Scholtz climbed onto the roof of a double story factory in St Francis to install a maritime radio antenna on the afternoon of Thursday 2 April 2020, he did not know he was about to become a turtle rescue hero.

Marius’s quick thinking, together with the guidance from Two Ocean’s Aquarium Turtle Rescue Network Coordinator Tracy Whitehead and the team at Port Elizabeth’s Bayworld Aquarium, resulted in an incredible and inspirational rescue story – and proof that even during the COVID-19 lockdown, everyday heroes get the chance to step up and become turtle rescuers. We caught up with Marius who recounted his tale of saving a tiny life.

“It is once again so heart-warming to experience astonishing goodwill and care by people. Roofus is the luckiest turtle alive,” 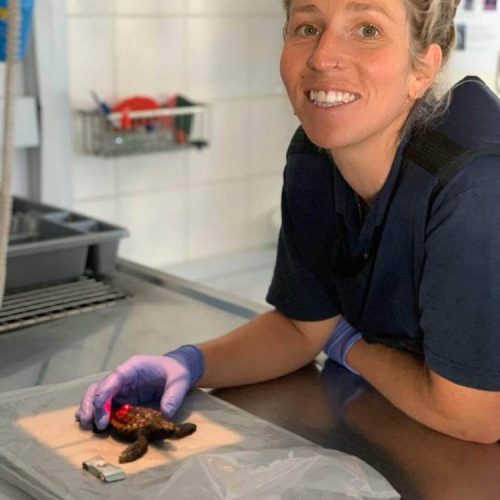 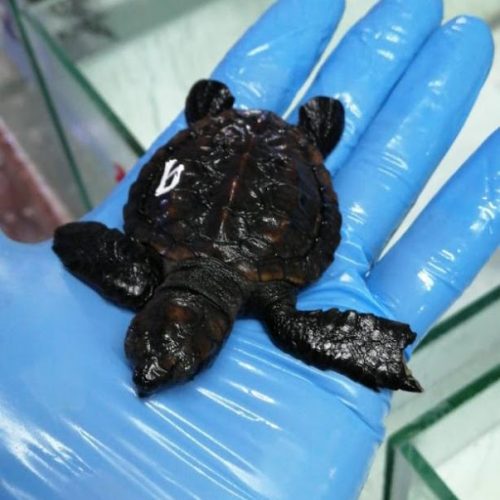 “Part of this base radio installation required an antenna to be installed on top of the roof, which was two storeys high. So I climbed up onto the roof and was looking for a path for the cabling when I saw what I first thought was a toy, a little toy of a sea turtle, lying on top of the roof in the sun. I guess this was about 17h00 in the afternoon.

I was just looking at this toy sea turtle, and I saw its head move! It just barely mustered all its strength to lift its head just a few millimetres, but enough for me to see that it wasn’t a toy and that it was still alive. 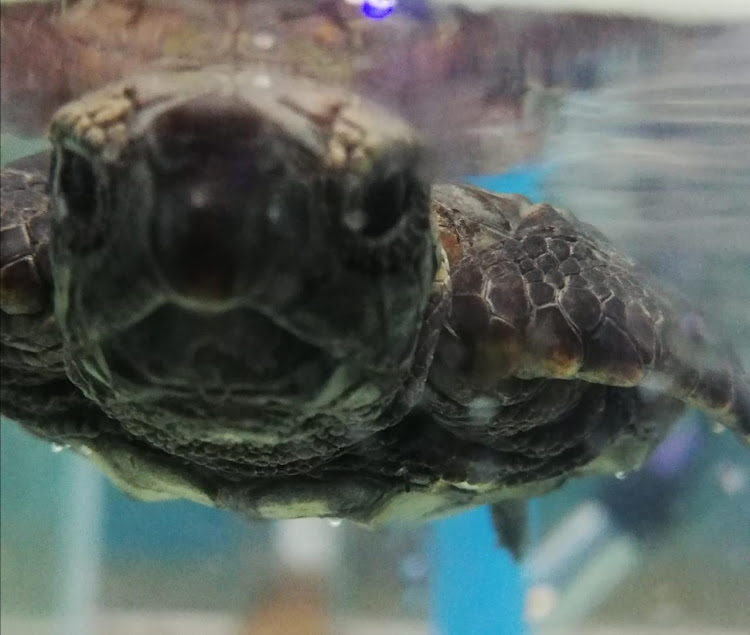 So, very surprised, one of Balobi’s workers retrieved it and brought it to me where I was working on the antennas and I saw that it was still alive. Then what I did is, I went down and got someone who had an old ice cream container, got that from them, scooped some seawater in and I put him into that. He was very dried out, obviously dehydrated. Looked like a piece of biltong.

I didn’t have much hope for him at all, but he didn’t give up. He kept moving his head and I also noticed that his left front flipper had a big chunk out of it on the tip. The only thing I could surmise is that he was dropped onto the roof by a seagull or some bird!

“I needed to scoop some seawater – didn’t want to waste time, so I used the water in the harbour there, which isn’t the very cleanest, but I thought it was more important to get him hydrated. Not knowing much about taking care of a little sea turtle, I just left him in there and he slowly, but very surely started showing a little more life. Flippers started to move, not just his head, but he was still very lethargic.

I was done for the day and I was going to head down to the beach to go get fresh seawater and maybe some sand to give him the option to be in the water or out of the water, but before I did that when I stopped at the beach, but before I got out, I thought ‘let me do a quick Google search’.  And I was lucky, within a second link that I clicked on was Two Oceans Aquarium’s how to care for baby sea turtles. I came upon their page, it explained to me exactly what to do and to contact the nearest sea turtle rescue person, which I got hold of and then after that they started guiding me on how to care for the little guy that then got the name ‘Roofus’ for obvious reasons.”

Turtle rescues will continue being carried out during the South African COVID-19 lockdown. Essential nature conservation personnel from CapeNature and SANParks, as well as law enforcement officers, are continuing to make regular patrols along some of our coastline’s stranding hotspots. These rescue operations are being supported by local municipalities – City of Cape Town, West Coast Municipality, Overberg Municipality and Knysna – which are all supporting the Turtle Rescue Network and aiding the transport of rescues to Bayworld and the Two Oceans Aquarium.

How to cook the perfect steak at home