Richard Holmes explores the irresistible blend of luxury and wilderness that has made Shamwari a bucket-list destination in the Eastern Cape. 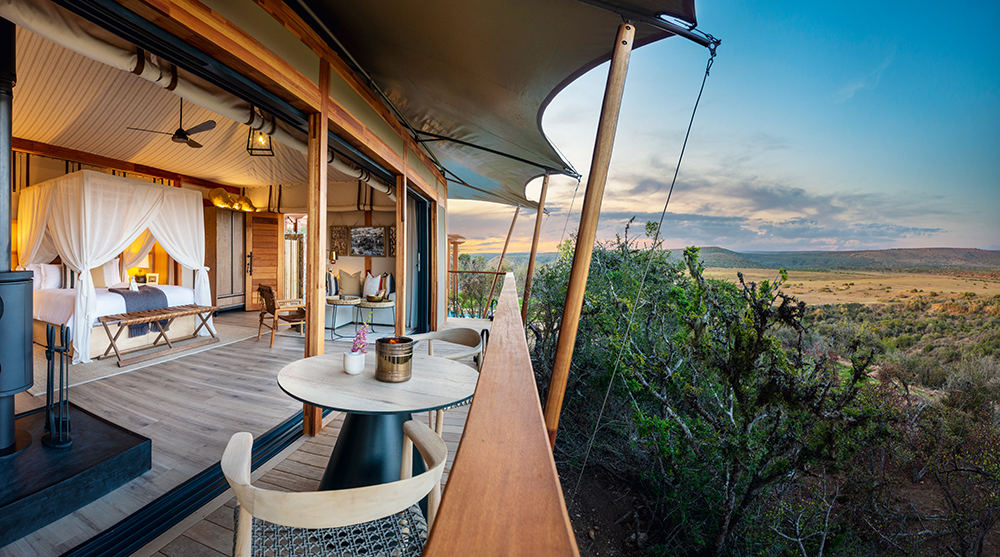 Raising the bar for under-canvas escapes in the Eastern Cape, the striking tented suites at Shamwari’s flagship lodge, Sindile, offer panoramic views across the Bushmans River and surrounding plains. Constructed on raised platforms to minimise the environmental impact of the lodge, Sindile offers eco-sensitive luxury at its best.

The rumbling seems to travel up through the dusty gravel and right through our safari vehicle. Deep, sonorous and visceral, it emanates from deep within the few tons of Loxodonta africana that’s ambling sedately past us. My nine-year-old son’s eyes are wide with wonder as the matriarch of the herd stops just a few feet from our seats and gets stuck into a tasty thicket of acacia.

That was just one of many unforgettable wilderness experiences on our long weekend at Shamwari Private Game Reserve, the iconic Eastern Cape conservancy midway between Port Elizabeth and Makhanda (formerly Grahamstown). There was also sundowners on a ridgeline, sipping G&Ts amid stands of Aloe ferox as a journey of giraffes loped slowly across the landscape below. One sunset we found a pair of cheetahs patrolling a cold and windswept hillside. In the chill of a dawn drive herds of zebra and red hartebeest went galloping across dusty plains eagerly awaiting the rains. In just a few short days we forged enough safari memories to inspire us to return.

And Shamwari is definitely having its moment in the sun. While the 25 000ha reserve was once a buzzword for luxury Big Five safaris in southern Africa, a period of change in ownership compounded by the global financial crisis saw Shamwari lose some of its lustre around 2010. The reserve bumbled along for a few years, largely overtaken in the glamour stakes by the likes of Singita and &Beyond.

All changed in 2017, when the Investment Corporation of Dubai (ICD), the sovereign wealth fund controlled by the government of Dubai, purchased the reserve. “We’ve been very fortunate in that the new owners have really bought into our conservation ethic and our vision for the reserve,” says CEO Joe Cloete, who has worked at Shamwari for nearly 30 years.

Along with the owners’ new energy came considerable new investment, to the tune of US$25 million. While some of that is set aside for future land acquisitions – the long-term goal is to extend and widen existing wilderness corridors – much of the investment has gone into transforming the hospitality offering.

Wonderful wildlife aside, the array of revamped lodges is a fine reason to plan a visit to Shamwari, particularly as self-drive local travel trumps outbound in the wake of the corona-virus pandemic.

Over the past few years, the lodges across the reserve have been rebuilt, upgraded and re-imagined. Old favourites have been transformed and new camps constructed. Today, there is a bed for just about every taste and budget.

For our family, with my young son in tow, Riverdene Family Lodge was an obvious choice for our long weekend in the bush. Multigenerational travel accounts for one-fifth of bookings to Shamwari and the recent upgrades have certainly set the bar high for family-friendly Big Five escapes.

The recently refurbished lodge offers nine rooms overlooking landscaped indigenous gardens that lead to a large pool deck with wonderful wilderness views. In each suite, there are sofa beds for young children or the option of interconnected rooms for tweens and teens. The unfailingly helpful staff are always on hand for a drink, snack or tweak to the dinnertime menu when needed.

As part of the dedicated ‘Kids on Safari’ programme, the highlight of Riverdene is the spacious play centre a few steps from the lodge. Staffed throughout the day to allow parents much-needed downtime, an indoor activity room spills out onto an impressive adventure playground, where suspended wooden platforms, climbing walls and zip lines provide plenty of opportunities for kids to burn off energy between game drives.

While Riverdene taps into the trend towards multigenerational travel, other lodge refurbishments on the reserve tap into other niche markets in the world of luxury safaris.

Left to right: Enjoy sundowners by the fireside at Sindile, a new lodge that “combines the peace and solitude of the bush with some of the best views on the reserve”, says Shamwari CEO Joe Cloete. Riverdene Family lodge offers an ideal Big Five escape for travellers with kids in tow.

Eagle’s Crag is an undeniably romantic option in the far north of the reserve, but perhaps the most exciting of recent renovations is Sindile, Shamwari’s new tented camp that caters for the growing interest in under-canvas safari escapes. With just nine luxury tents, each accommodating two guests, it’s an intimate lodge boasting superb views out over the Bushmans River and surrounding plains. It’s named in honour of the matriarch of Shamwari’s leopards and it’s not hard to imagine Sindile herself enjoying the views on offer from these luxury under-canvas suites. Opulence is the name of the game here, with each tent boasting a private plunge pool – heated, of course – and a generous lounge area. That’s in addition to the spacious bedroom and bathroom with endless views over the reserve.

If Sindile isn’t exclusive enough, the five-bedroomed Sarili Lodge has recently been converted into an exclusive-use safari villa, offering privacy and seclusion for small groups and families seeking a bespoke bushveld escape. Guests have a housekeeper, a private chef and dedicated rangers at their disposal, allowing them to curate their own safari experience as they see fit.

While Sindile and Sarili are both gloriously modern iterations of a safari camp, Long Lee Manor revels in the colonial history of this corner of the Eastern Cape. After a year-long refurbishment, the new lodge blends period inspiration with subtle contemporary touches across its 18 suites and spacious public areas. Timber panelling meets elegant bathrooms, luxury linens contrast with organic leather textures and understated floral motifs underline the Edwardian heritage of this grand Eastern Cape lodge.

Yet while the lodges are superb, they are also a means to an end. Each afternoon – after sumptuous high tea – I tear my nine-year-old away from the kids’ centre at Riverdene with the promise of yet more pachyderms and pods of hippo.

As we trundle out on our afternoon drives it’s remarkable to realise that just 30 years ago this entire reserve was mere scraps of degraded farmland. When Adrian Gardiner founded Shamwari in 1990, he tore down the fences, rehabilitated the land and slowly restocked these hills and plains with the indigenous game that would have once roamed wild here. And the conservation ethos that was the foundation of Shamwari continues today. 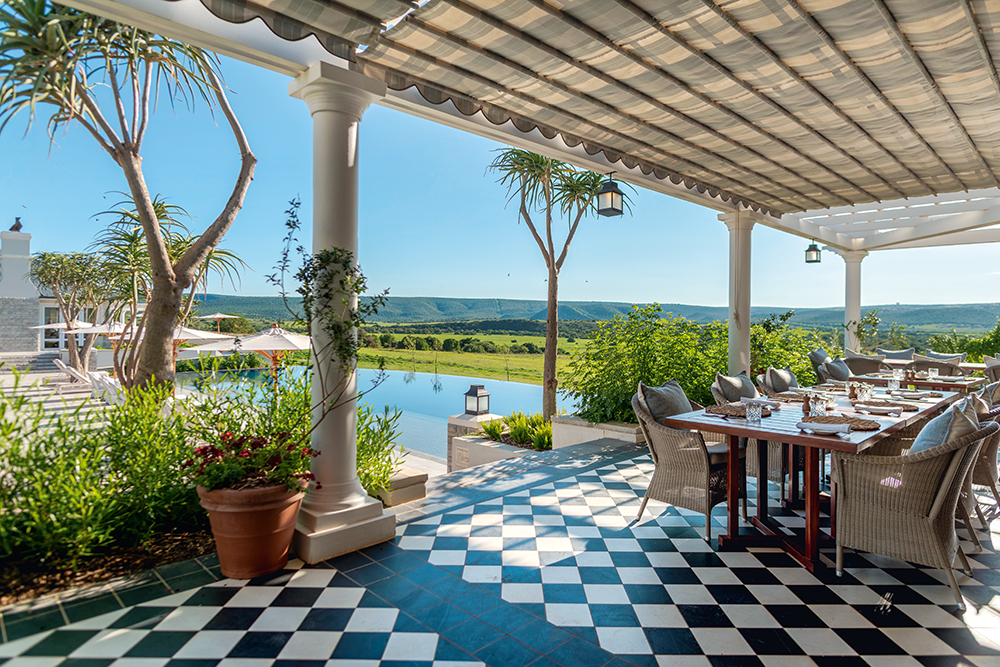 A crucial, if often unsung, part of the recent investment has been the overhaul of Shamwari’s Wildlife Rehabilitation Centre. Set in a quiet corner of the reserve, the centre accepts orphaned, injured and sick animals from across the region. During a stay at Shamwari guests are offered a guided tour of the facility with its customised bomas that are home to a Noah’s Ark of animals in treatment and rehabilitation. With one of the resident veterinarians as a guide, they hear remarkable and often humorous success stories of returning animals to the wild.

No less important, though slightly more poignant, is a visit to the Born Free Foundation on our last day. This international big-cat rescue initiative has two Animal Rescue and Education Centres on the reserve, providing a place of safety for big cats rescued from private ownership, zoos and circuses worldwide. On scheduled visits enthusiastic staff lead guests through the facility, highlighting the plight of animals in captivity and offering a rare glimpse of these majestic cats happily living out their days in large, tree-filled bomas.

It’s a moving counterpoint to the rehabilitated wilderness on offer just beyond their fences. Were it not for visionary thinking and decades of hard work, the wild spaces of Shamwari may not exist and my son’s only opportunity to see these cats would be behind barbed wire. As we head north in search of a cheetah sighting that comes crackling across the radio waves, I raise a mental toast to the founders, visionaries and rangers who ensure that such pockets of wilderness remain. Our only task? To get out there and enjoy them. 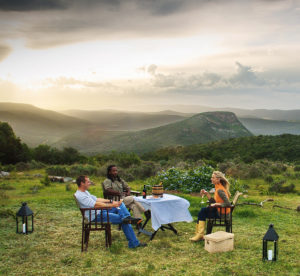 Shamwari offers money-saving deals for South African residents during the winter months. From 1 May until 30 September locals get up to 40% off at selected Shamwari lodges.

How far can vellies take you?

7 lessons learned while locked down abroad

What the future holds