Wine
1 month ago
by Stellenbosch Visio
0

‘Positively ancient’ describes soils of the Cape Winelands, the ones that form the bedrock,
quite literally, of some of their finest wines. Which, says Emile Joubert, goes a long way
towards explaining the name of this Vilafonté wine. 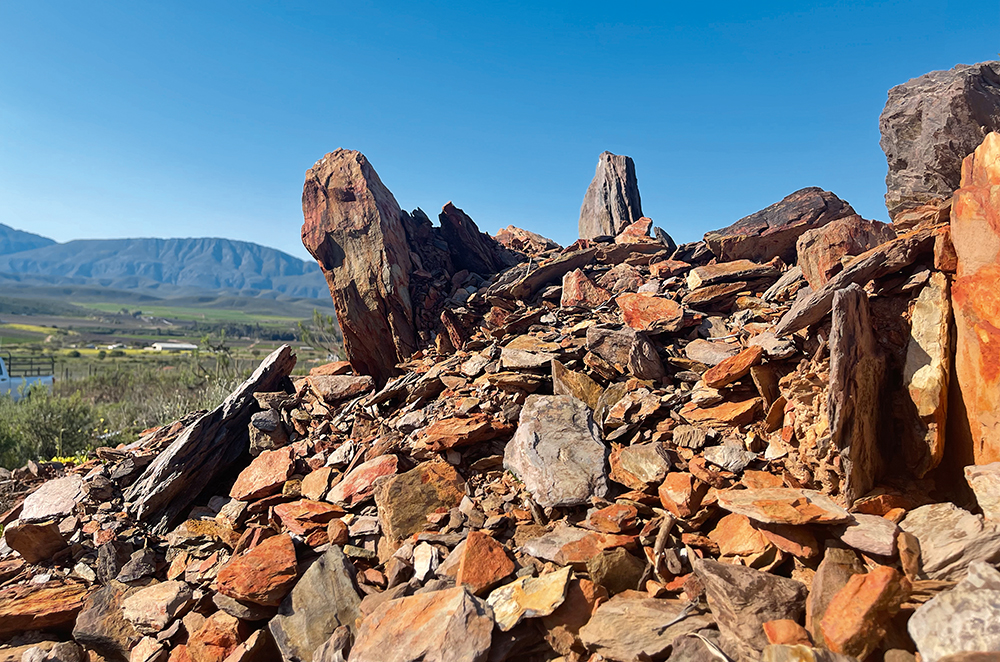 Look at that wine bottle with the label ‘Seriously Old Dirt’ and right there certain conventional wine terms are thrown out of the window. In a competitive environment seeking to sell premium wine to fashion-conscious wine drinkers, ‘serious’ and ‘old’ are not the first descriptors that come to mind. And as for ‘dirt’ … I mean, who uses ‘dirt’ in any reference to an item meant for human consumption, not to mention enjoyment?

But for Mike Ratcliffe, owner of the iconic Vilafonté and his team, the belief, honesty and commitment on a wine label, are more important than the norm. Especially if that belief revolves around the ethos of creating wine from vineyards planted in some of the oldest soils on Earth.

“Seriously Old Dirt underscores our conviction that South African wine growers have something truly unique in the ancient soils that characterise the Cape Winelands,” he says. “It is actually a bold story, visceral and tangible in these old clods of earth in which the country’s vineyards are set. The geology of our wine regions presents the industry with an incredible opportunity to emphasise an aspect that makes our wine offerings totally original and captivating: diversity of soil, dating back 700 million years to the beginning of planet Earth. If that is not a unique selling point, what is? Like fellow winemakers Eben Sadie and Chris and Andrea Mullineux, we deem it a privilege to honour these soils through our wines.”

And not just old soils but, like, seriously old.

“I can’t for the life of me remember when exactly the name Seriously Old Dirt cropped up,” says Mike. “The term was being bandied about in the Vilafonté winery long before the wine was even thought of. At the beginning of our journey, Phil Freese – co-founder of
Vilafonté and a previous partner – introduced the Vilafonté project by stating it evolved from a quest in which the team took the classic grape varieties of the world and planted them in the oldest soils on Earth. The rest is history.”

And yes, it is all about the ‘dirt’. As Mike points out, Seriously Old Dirt the wine is “regionally agnostic, but soil-specific”, the result of classic winemaking from vineyards selected through various journeys of discovery throughout the ancient geologies that make up the Cape Winelands.

“Together with legendary soil scientist Dawid Saayman and viticulturist Marco Roux, we have discovered, identified and profiled some of the oldest soil sites in the Cape,” he says. “From the decomposed granite of Stellenbosch to the layered vilafontes soils in Paarl and the rich limestone fossil beds of the Wandsbeck Valley 160km east of Cape Town, vines are bedded in growing matter that harks back to the beginning of the Earth, more than 700 million years ago. As a wine, Seriously Old Dirt’s roots are anchored in these soils, both in terms of the quality of fruit the vines growing here give us and in our geological curiosity in honouring this cardinal feature of South African wine.”

Arlene Mains, Seriously Old Dirt’s seriously smart and youthful head winemaker, confirms Mike’s commitment to soil as the principal building block of the wine. “Soil is the foundation, the life-blood of a vineyard,” she says. “It is the earth that determines the personality, the character and the varietal expression of the grapes the vineyards are going to give me to make wine from. The search for vines planted on these old, prehistoric soils has been a voyage of wonder for all of us involved with Seriously Old Dirt. Exploring the South African Winelands with a focus on finding ancient geology and to see how unique geography has created an extraordinary symbiosis with the vineyard has been mind-shifting and gives the wine a new dimension.”

With an MSc in Wine Microbiology from Stellenbosch University, Arlene has worked at Château Mouton Rothschild in Bordeaux and in several vintages at Opus One, the cult Californian brand that began as a collaboration between the Rothschilds and Robert Mondavi. It was spending time in the vineyards at Opus One that gave her this insight into the importance of viticulture and soils.

The 2020 vintage of Seriously Old Dirt has 86% Cabernet Sauvignon, 8% Merlot, 4% Malbec and 2% Cabernet Franc. And composing the blend is one of the areas where true craftsmanship comes into winemaking.

“As head winemaker for Seriously Old Dirt by Vilafonté, and being focused on one wine only, there is no space for even one drop of wine to not meet the criteria we demand in the final bottle,” says Arlene. “If a barrel of any of the components is not performing, I have the authority to remove it from the process.”

The young wines, on completing malolactic fermentation, give Arlene and her team an idea of the percentages of that vintage’s blending components. “Different varieties and vineyards are, however, aged separately in old French barriques (225ℓ),” she says. “After six months, the barrels will be assessed and the final blend brought together. The wine is then sent back to barrel as a complete whole to integrate and mature further for another six months.”

All this talk of quality and criteria and selection poses the question: what does Seriously Old Dirt aim to be as a wine?

Arlene smiles. “Well, it probably isn’t recognised as official wine terminology, but ‘yummy!’ is the first thing that comes to mind,” she says. “Classical red grape varieties led by Cabernet Sauvignon, a variety made for growing in the ancient soils of the Cape, aged in old barrels to soften the edges and provide the sumptuous fruit flavours found in a fine red wine – it can only be delicious and that is why one would want to drink it.”

Subscribe and win a stay at Sky Villa Boutique Hotel