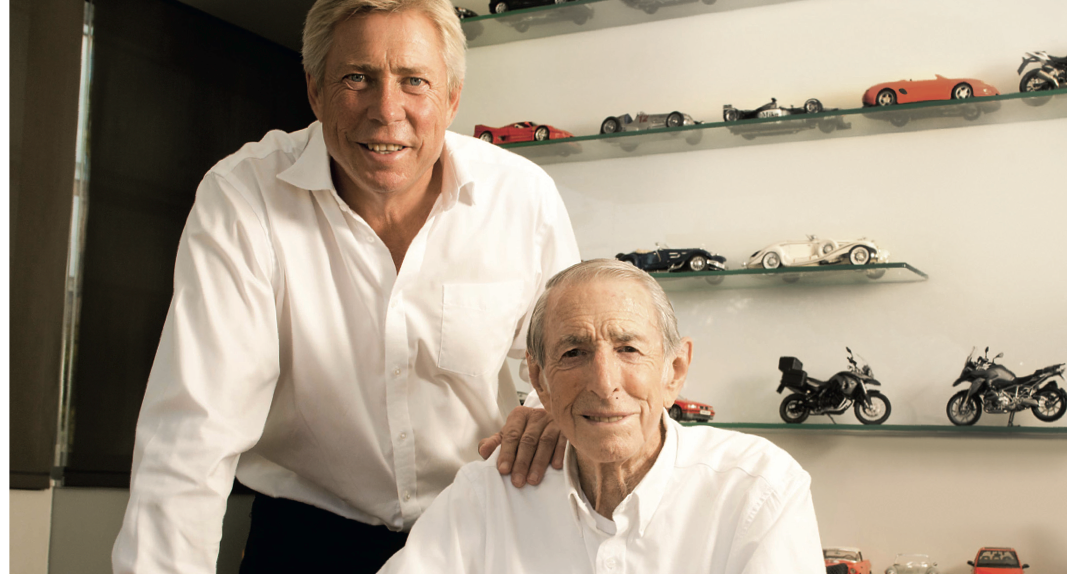 Motor oil runs in the veins of the Philp family. Since 1946, when Wallace James Philp opened his first dealership using £100 borrowed from his father – a substantial sum back then – the family has be- come synonymous with the motor industry in Stellenbosch. Now, three generations later, Selfords Motor Group has grown into an industry leader with businesses across the Cape and a mantelpiece of awards to show for close on 70 years of hard work.

Wallace had started his career as a motor car salesman a decade earlier, but with the Second World War putting both supply and demand on hold, it was only in the mid-1940s that Selfords really began making a name as the best place in town to buy a set of wheels.

With the market growing, a new dealership was built on Market Street. “Back then the locals said, ‘die Engelsman is mal’ as he was building way out of town,” chuckles Donald Philp, who joined his father in the business soon after the war ended.

A son joining the family business is one tradition that’s kept Selfords going strong over seven decades. The other is the father abruptly handing over the reins and leaving the son in the driving seat.

“In 1954, my father left the business,” remembers Donald wistfully. “He walked out and said: ‘I’m retiring now’. I knew nothing about management, but I managed to survive.”

That is something of an understatement; by the time Donald’s son, Mark, joined the business in 1982, Selfords was a household name in the Winelands. Eight years later Donald kept up the family tradition and threw Mark in at the deep end.

“When Mark came into the office on 2 January 1990, I got up from my desk and said: ‘That’s your seat now’,” remembers Donald.

“I have a theory about generations of family businesses,” chimes in Mark, who has three adult children of his own. “The first one has the idea, the second builds on that idea … and the third one takes the money and spends it!”

It’s a comment made in jest, but with a ring of truth to it, for sustaining a family business past the third generation is a rare and impressive feat.

That generation, aside from selling the family silver, is all too often forced into joining the family enterprise, explains Mark. “The reason the third generation so often messes it up is that they feel obligated to join the business. In my case though, I had a passion for the industry from day one. I love cars; I grew up with cars. The whole business was a passion for me and I wasn’t going to see it fail.”

For the business landscape is constantly changing and today’s globalised world is a far cry from the early days when deals were done on the strength of a handshake. Remaining successful requires constant evolution.

“In years gone by dealers were left to their own devices,” says Mark, as he indicates black and white photographs of the early family dealerships on the walls of his Church Street offices. “It’s been a fascinating evolution, from a business where as dealers we were entrepreneurial, and our entrepreneurial spirit could be lived out in the dealership, to a case where we are bound by the requirements of the manufacturers.”

But the Philps have easily adapted to the changing landscape and grown with it. Today the Selfords Motor Group employs 235 people across a myriad of motor-related businesses that stretch from service stations and auto repair shops to dealerships. Trading under the Donford brand, they also represent some of the most prestigious marques in the motor industry: the group boasts an impressive BMW dealership and Motorrad motorbike outlet on the R44 towards Somerset West and last year opened the world’s first BMW Motorrad lifestyle concept store in Buitengracht Street, Cape Town.

“BMW held the international launch of their ‘Make life a ride’ campaign at the store,” says Mark, who found inspiration for the store in the motorbike shops of Milan, Italy. With Motorrad cruising along smoothly, the latest addition to the Stellenbosch ‘family’ is a gleaming new dealership selling and servicing Jaguar and Land Rover vehicles.

Even if brand-conscious corporations have trimmed the flicker of entrepreneurial flame, the value of one-on-one relationships is stronger than ever.

For despite the millions invested in world- class dealerships, in the end it all comes down to the relationships built up across generations of the Philp family living and working in the Eikestad.

“Although we have dealerships across Cape Town, we’re well connected in Stellenbosch, because we live here, we socialise here,” says Mark, a keen golfer and member of Stellenbosch Golf Club. When he’s not chasing birdies, he’s to be found crafting garagiste wine just off the R44.

It’s been a long and interesting 70 years for the Philp family and the motor business they’ve built from the ground up. Their journey recalls the motto for BMW motorbikes, which was launched at their Donford store: ‘Make life a ride’.

For the Philp family of Stellenbosch, it couldn’t be more apt.

Of Heritage and Heirlooms