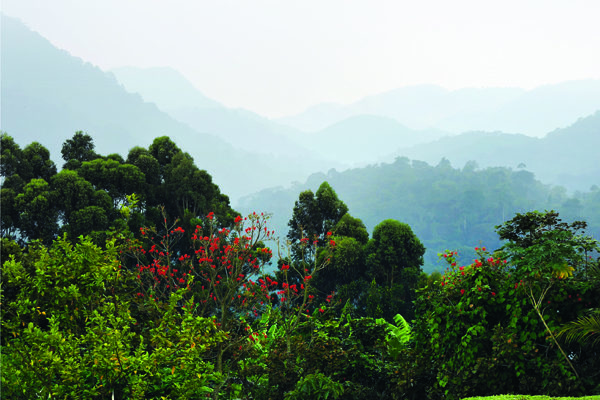 In Bwindi Imprenetrable Forest I became so fatigued that I could not rest, could not sleep. For two consecutive days I had led groups of clients on their first mountain gorilla treks, each lasting more than 14 hours. It’s not easy to find gorillas in Bwindi and the attempt can test the limits of even the hardiest explorer. At more than 400km2in extent, the national park contains a lot of ground to be covered, so it’s really up to the gods whether or not the great apes are located.

Visitors are permitted to spend only one hour in contact with a gorilla group because habituation and excessive contact with humans compromise the survival of the entire family unit. Lucky trekkers find the gorillas close to the edge of the rainforest or on a footpath, but on these two days we had to hack our way deep into the forest and then hack our way back out to its edge.

I was fortunate that the lodge where my tour group stayed was full, so I was given a beautiful log cabin in the rainforest. Late on the second afternoon I arrived there and, in full and dirty kit, simply collapsed onto the bed, too exhausted to take off my boots. I lay there, eyes open, racked with sore muscles, nettle stings and thorn scratches, simply too tired to move. How strange that we humans are so attuned to being watched. Suddenly, in this miasma of fatigue, I became aware that I was being observed. Lifting my head slightly and looking over my prone body, I saw an adult female mountain gorilla on my stoep, her eyes fixed on mine.

Well versed in the strict rules that regulate encounters with great apes, I slowly rose, picked up my camera and edged along the wall towards the open door. All the while the gorilla held my gaze, not flinching for a second. Once outside, I leaned against the stoep railing and waited. Slowly she approached. Pulling her young male child a bit closer, eventually she settled in front of me. As she gazed up she noticed a tiny scab on my elbow. Lifting her hand, she ever so gently scratched at the scab until it fell off. As she did so, a man with a camera suddenly appeared on the footpath in front of the cabin, gazing in bewilderment at me and the wild gorilla on the stoep. I gestured weakly for him to take a photograph. At that moment, the female dropped her hands and gently placed her soft cheek on my knees. I began to weep.

Of all the planet’s great apes, the mountain gorilla is by far the most threatened. Less than a thousand of these magnificent ani­mals remain, all of them surviving in landlocked islands of rainforest. Early researchers and conservationists such as Dian Fossey were able to bring the plight of these unique animals to the public’s attention only through their own courage and sheer force of will. Dian’s untimely murder was instrumental in securing the species’ status as Critically Endangered by the International Union for the Conservation of Nature (IUCN), as well as governments’ buy-in to sustainable conservation programmes.

One of two subspecies of the eastern gorilla, the mountain go­rilla is found only in two areas of rainforest, one of which lies in the Virunga Mountains of Central Africa where Uganda, Rwanda and the Democratic Republic of Congo meet. The other, though, is my favourite: Bwindi Impenetrable Forest in Uganda. Bwindi will always be number one for me because this is where I had my first encounter with mountain gorillas.

In the mid-1980s, I was part of a team of social foresters visiting Bwindi to address the plight of the pygmy clans that were affected by the government’s draconian stand on the multiple use of protected areas. As a reward for our work, we were taken on a gorilla trek. Those were the early days of gorilla tourism, when the camps were still primitive and there was no infrastructure at all. On the first morning I distinctly remember being woken in my tent by the camp cooks, who were using cooking pots as cymbals to chase marauding chimpanzees away from the larder. We were protected by heavily armed guards as, just days before, a group of German tourists had been gunned down in the district.

Very few troops were habituated to humans at that time and our trek was heavy going. It took several hours before we found a group and by then it was about noon. Gorillas seem to be Latino by nature and, like the Spanish, they’re partial to a little siesta at this warmest hour of the day. Our little party settled in the shade and watched the group at leisure, the only movement being naughty youngsters keeping their parents from getting some rest. I had found a spot behind the silverback and was simply marvelling at his gigantic size. Without warning, and with a loud rasp, the male unleashed a drawn-out wind, which swiftly wafted over to where I was resting. To say I was gobsmacked is an understatement, but I instantly realised how extremely lucky I was to have smelt the fart of one of the rarest animals on the planet!

But I digress. Mountain gorillas are genetically distinct from their nearest relatives, the still common lowland gorilla, and have longer and thicker fur to protect them in their cooler mountainous habitat. As far as their genetic relationship with man is concerned, they are more distant than the chimpanzees, especially the bonobo, man’s closest living relative. Their separation from the eastern lowland gorilla spans at least 400 000 years, and it’s more than two million years since they split from their western lowland counterparts. This is more than enough time for distinct evolutionary changes to have manifested.

Physically these are striking apes, with the silverback males reaching 195kg and a height of 1.68m when standing upright. They dwarf the females, which weigh in at 100kg and stand about 1.4m tall. The males also develop a striking bony crest on top and behind their skulls, which serves as an attachment for their temporal muscles. All this musculature belies a rather gentle temperament, which is interesting when one considers the rowdy, brutal and loud life of chimpanzees. Yet there is one overriding feature that endears mountain gorillas to every visitor I have taken to see them: their gentle, deep brown eyes. Locking eyes with a gorilla brings on unexpected emotions, and I have seen hard men cry when they meet the open gaze of a gorilla.

Like most of the great apes, gorillas rise from their leaf-lined nests at daybreak and start feeding immediately. Being exclusively vege­tarian, they are bulk browsers and need vast amounts of food to sustain their large bodies. At noon they take a rest and resume eating at about three, continuing until sunset. Then they start to build their nests, a new one every evening. Only infants share a nest with their mothers; each of the rest of the group makes a sleeping place for itself.

I often wonder why the conservation-minded tourist is so fascinated by these great apes and suspect it is because they are the rarest great apes left on the planet. They have been poached and hunted for hundreds of years, their habitat is being destroyed, they catch diseases from humans and livestock and they live in areas where conflict is rife – little wonder they are so threatened.

Given the conservation measures currently in place, I believe that the gorillas’ medium-term survival is assured. But, with the planet in the grip of unstoppable climate change, it is an open question whether they will survive in the wild in the long term. And that’s all the more reason for adventure-seeking ecotourists to include mountain gorillas on their to-do list. By buying a gorilla-viewing permit, they make a massive contribution to the protection of not only the great apes, but also the magnificent rainforest they live in.

When you next plan a trip that will immeasurably enrich your life, consider a mountain gorilla experience in Uganda or Rwanda (there are also gorilla-viewing trips in the Democratic Republic of Congo but political instability makes this a fairly risky option). Over the years I have visited mountain gorilla families more than 20 times and with each interaction I am struck anew at how these gentle pri­mates can reduce human reason and knowledge to a deeply rooted feeling of being at one with the gorillas and with the living earth. To meet the gentle gaze of a mountain gorilla is to be truly earthed.

The architecture of trees with Dave Pepler

Will the guava make a comeback?