The Nederburg Auction (now known as the Cape Fine & Rare Wine Auction) has found a new home in Stellenbosch, the Cape Wine Academy celebrates four decades of producing wine masters and local producers dominate in the cabernet sauvignon rankings with 9 out of the top 10 in the2019 Prescient Cabernet Sauvignon Report hailing from the region. Eikestadnuus editor Danie Keet weighs in with the local stories that matter.

The historic Nederburg auction, which began in 1975, will be presented this year for the first time in Stellenbosch. The auction will now be known as the Cape Fine & Rare Wine Auction and will be held in October. The change is in line with the strategy of Distell’s new company specializing in premium and gourmet wines, Libertas Vineyards and Estates. The purpose of this company is to support the status of South African wines worldwide and to highlight the status of South African wines as premium quality. 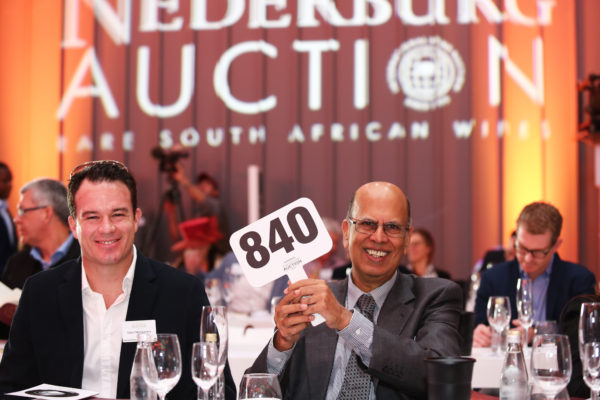 The company’s CEO, Kay Nash, says the collective vision is to build an industry platform that broadens access to gourmet wines produced in South Africa and to access markets in countries where it has not previously been possible. was not.

“We believe that the auction will be a catalyst for change, which will ultimately help us achieve our goals. “By developing an extensive industry platform for the producers of gourmet wines, and using our 44-year experience and investment, we will interest new and existing, local and international buyers in South Africa’s gourmet and scarce wines. increased. “Collectors and investors are looking for more and more wines that tell a story and have a strong connection with a specific place or wine farm. They are looking for scarcity, quality and origin. The variety of gourmet and premium wines will definitely meet their expectations. ”The auction is held at the Rupert Museum. There is a new selection process and the auction also takes on a new format. The final selection of wines, under the curatorship of a panel of judges, will have to meet strict criteria, which will focus on quality, scarcity and collectability. 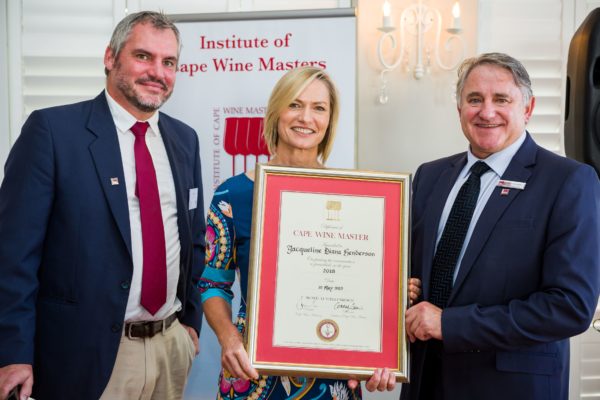 A new Cape Wine Master has graduated and joined the ranks of the Institute of Cape Wine Masters in the year the Cape Wine Academy (CWA) celebrates the 40th anniversary of its educational service to the wine industry.

By joining, Jacqui Henderson of Iona Wines brings the number of Cape Wine Masters (CWMs), an elite group that underscores winemaking as an academic discipline, to 102.

According to chairperson of the Institute Conrad Louw, since the inception of the CWA in 1979 nearly 200 000 wine enthusiasts have attended its lectures and training programmes, which were instituted as part of the Stellenbosch Farmers’ Winery (SFW) Wine Plan.

Henderson was awarded her certificate by Harry Melck, recently appointed head of the CWA, at a function held at Neethlingshof Wine Estate on Friday 10 May. (Melck, incidentally, was the only CWA graduate last year.)

Fellow Cape Wine Master Jeff Grier of Villiera presented her with the traditional sabre trophy and award for outstanding achievement in the MCC wine tasting exam.

Henderson’s dissertation was entitled A case for chardonnay as a regional signature variety for Elgin’s cool climate. It is available in full on the websites of the CWA, www.capewineacademy.co.za, and the Institute of Cape Wine Masters, www.icwm.co.

It explores chardonnay as a regional signature variety for Elgin’s cool climate, using data from eight weather stations situated in Elgin, an online research platform and interviews with producers. Findings show marked temperature variations within Elgin and ideal chardonnay conditions. The division of Elgin into wards is proposed. 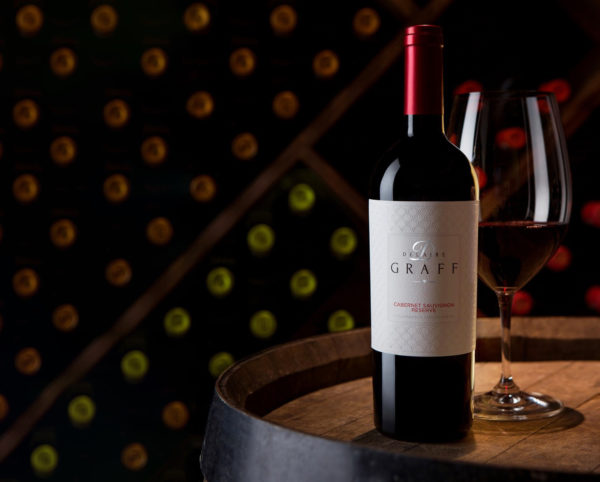 It is the unique combination of soils, sites and skilled winemakers, was yet again proven in the 2019 Prescient Cabernet Sauvignon Report released recently.

According to the judge’s key findings, 2017 could prove to be an even better vintage than the much-acclaimed 2015 for South African cabernet sauvignon, with six of this year’s top 10 coming from 2017. The judges also agreed that Stellenbosch certainly owned the category – with nine of the top 10, and 34 of the 43 wines to rate 90, originating from this district.

Cabernet sauvignon is the most widely planted red wine variety in South Africa, and requires the perfect terroir, soil and plenty of sun, but with moderate temperatures and well-drained, weathered shale and granite soils.

And Stellenbosch ticks all of these boxes.

“It’s not like Stellenbosch chose cabernet… cabernet chose Stellenbosch. There are many properties here with long track records that need to be respected. It’s clear that cab is Stellenbosch’s calling card and I think the variety has got a great future,” says Johan Malan, winemaker of Simonsig wine estate.

Nine out of the top 10 cabernets originate from Stellenbosch district:

“It is great to see such a diverse range of Stellenbosch producers reaching the top echelon of South African cab production.

“This is a further testament that Stellenbosch is truly the home of cabernet in Africa,” concludes Christo le Riche, the chairperson of the Stellenbosch Cabernet Collective. 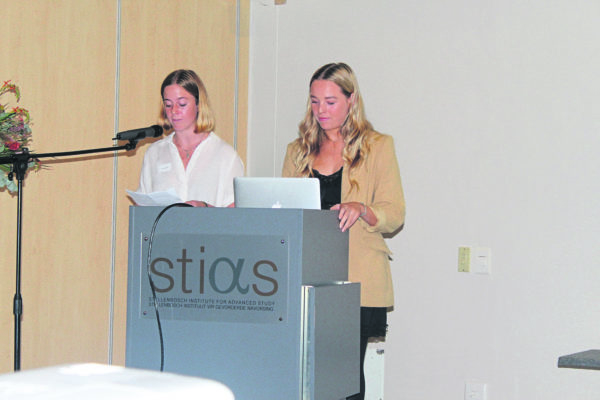 It was a bittersweet moment when the Winnie Rust Foundation was launched on Saturday 11 May – the third anniversary of the Afrikaans authors’ death.

Nigel Plaatjies, whom Winnie had mentored and helped financially, and his uncle Johannes Plaatjies are currently serving life sentences for her murder in her Wellington home.

The launch took place at The Stellenbosch Institute for Advanced Study. 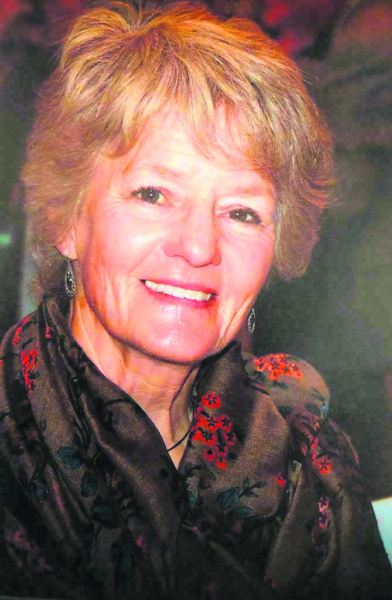 Speaking on behalf of the family, Gordon Reid, administrater of the foundation and Winnie’s son in law, said they want her to be remembered for what she was trying to do at the time of her death rather than for her senseless murder.

“It is our wish that today be seen as a celebration of Winnie’s life and more specifically a celebration of the compassion and desire to make a positive difference in the lives of others. On Sunday 8 May 2016 we had the privilege as a family to celebrate Mother’s Day for all the mothers in our family, and Winnie Rust was one of them.

“At one point during the meal there was an opportunity as children to tell the mothers how much they mean to us – to tell Winnie how much she meant to us. Little did we know it would be the last opportunity we would have, because three days later she was murdered by someone to whom she had been a mother for many years. This is just one of the many ironies that marked this senseless tragedy.”

According to Reid, what Winnie was trying to do at the time of her death, remains inspirational.

“She was endeavouring to play a role, however small, in helping those less fortunate than herself by providing opportunities to disadvantaged people who came across her way to rise above their circumstances, to live as she did with open arms. What she was doing for Nigel Plaatjies was a beautiful thing, and it is this legacy we as a family would like to perpetuate.”

The goal of the foundation is to provide educational and training opportunities for poorly resourced people in the Western Cape Winelands. This will be done both through financial and mentoring assistance. The foundation set up a bank account last year and started raising funds through donations enabling it to already help several people from the beginning of this year.

A weekend of running, riding and hiking