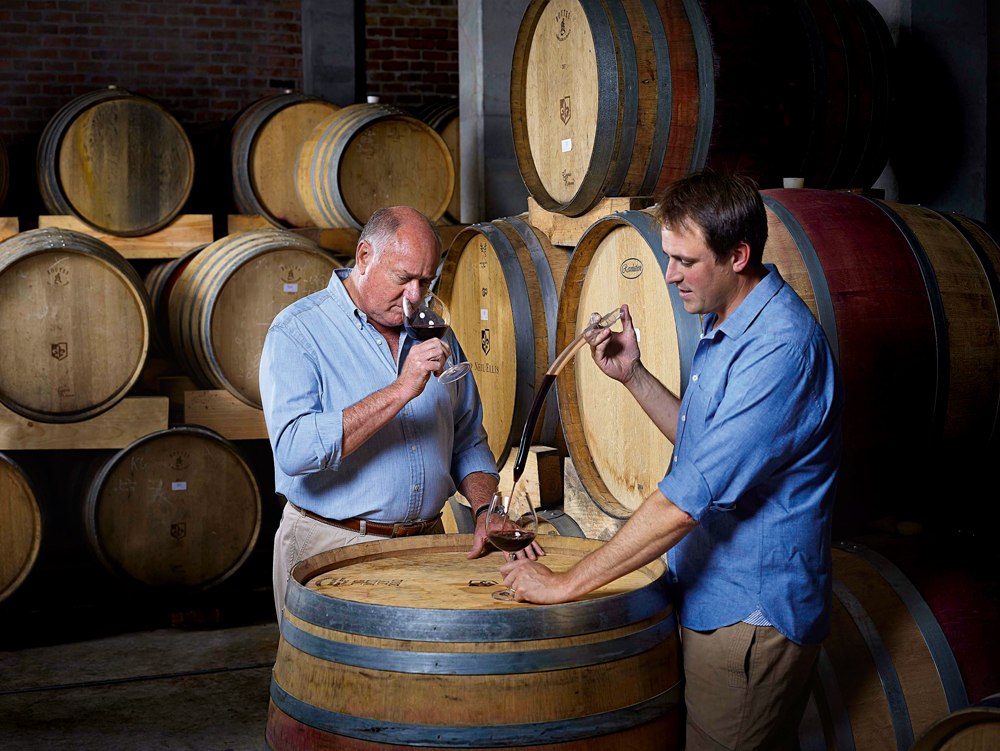 In 1984, a young winemaker challenged the wine legislation of the day and set out to identify two vineyards from which he dreamed of producing a Cabernet Sauvignon – and ultimately did. Today, 35 years later, Neil Ellis Wines has built a stellar range of wines and a solid reputation for selecting exceptional vineyards, where the site and regional expression are vital criteria. “You can’t have one or the other,” says Warren Ellis, Neil’s son and the current winemaker. “Our objective is the same as it was 35 years ago: to produce a wine of a distinct style. To do that, you need to be specific, first about the vineyard and then about expressing terroir.”

It was an uphill battle to get to this point. After a few years as winemaker at KWV, Neil headed the cellar at Groot Constantia, where he came to understand the close link between vineyard and cellar. “I was looking around at what was going on in the South African wine industry and where we were in terms of the rest of the world. We needed a paradigm shift, we needed to get our feet in the vineyard,” says Neil.

To do so meant a lot of nosing around a restrictive quota system, but in 1984, Neil produced his first Cabernet Sauvignon, sourced from two vineyards: one in Banghoek and the other in Firgrove, just outside Stellenbosch. He called it ‘The Vineyard Selection’ and produced 437 cases. Released in 1986, it retailed for between R7 and R8.50 per bottle.

Neil’s venture registered many firsts in an industry stifled by bureaucracy. He identified vineyard sites, he produced wine from grapes not his own and in a cellar space that he rented, and he put his name on the label. The wine itself, the first release of the well-known Vineyard Selection range, best tells the story of soil, climate and the art of winemaking. Neil’s vision, the pursuit of quality, extended out of the cellar and into the vineyards, where varieties would excel and best express a particular style of wine that reflects their environment.

Next up, Neil headed to Elgin and identified a Sauvignon Blanc vineyard on the Whitehall farm. He ran into trouble when regulations prevented him from transporting grapes from one region to another but by 1990, rules regarding wine appellations had changed enough for him to source, produce and launch the first certified Elgin Sauvignon Blanc of the same vintage. Shortly afterwards, in 1991, the Groenekloof Sauvignon Blanc from Darling made its debut as another first for the industry and has since grown into a stellar brand name and all-time favourite Sauvignon Blanc.

The Vineyard Selection grew into a range of wines sourced from four primary sites: Stellenbosch, Elgin, Groenekloof and Piekenierskloof. While Stellenbosch grapes remain pivotal for superior Cabernet Sauvignon and Pinotage, the pursuit of quality vision allows for a style of varieties like Chardonnay, Sauvignon Blanc, Shiraz and Grenache that are best reflected in origin.

“In Elgin, the cool summers allow for a longer ripening period, which produces grapes with concentration, fruit intensity and ele­gant tannins,” explains Neil. This inspired him to produce a Sauvignon Blanc in early 1990. Today the only vineyard-selected wine in the Neil Ellis range from Elgin is the widely successful Whitehall Chardonnay.

Back in Stellenbosch, grapes from the south-facing and significantly cooler slopes of the Jonkershoek are the sole component of their award-winning Cabernet Sauvignon. The howling south-easterly wind in summer cools down the vineyards considerably, minimising vine disease and holding down yields. Rooted mostly in deep, red clay soils, these well-established vineyards perform well even in challenging years.

From Jonkershoek we head north towards the rolling hills of Bottelary, where 20-year-old Pinotage bush vines are rooted within sight of the cool and breezy False Bay. This wine, with a coveted track record of five stars in Platter’s Guide and a Pinotage Top Ten winner, expresses a pure and sweet fruit intensity that has been called one of the best judged expressions of the variety by wine critics.

Further north, in the Piekenierskloof, the team from Neil Ellis identified old Grenache bush vines that were planted mid-century and are completely disease-free. “These components ensure a distinctive style of elegance, finesse and sweetness of fruit in the wine,” says Warren.

South-west of the mountain vineyards are where the award-winning Groenekloof Sauvignon Blanc and Shiraz are grown. Just outside the small town of Darling and a mere eight kilometres from the Atlantic Ocean, these grapes are among the best examples of site expression in both varieties, where a long ripening period ensures maximum aroma development. Here, the most recent addition to the terrain-specific wines, the Neil Ellis Cinsaut, also grows.

The story of Neil Ellis Wines continues as Warren spends much of his time researching and exploring new sites, gaining valuable infor­mation and experience that will ultimately serve the company’s objec­tive to continue to produce wines of a distinct style. “As a new generation of winemakers, it is important we respect and acknowledge the experi­ence and the knowledge of the past 35 years and apply them to the current techniques and technologies of today,” he says. “Our vision remains to make distinctive, refined wines that are expressive of their terrain and rank among South Africa’s finest. As my father origi­nally said, it’s a pursuit of quality, nothing less.”