In what has become a long-standing tradition for Bloemhof‘s matrics, each year the group puts their heads together to source and donate a piece of art to the school’s collection. This year the matrics have outdone themselves, honouring Bloemhof “old-girl” Marlene Steyn by donating a series of thought-provoking pieces by this sensational young artist to the school.

Steyn’s 2017 series titled Koeksister’s Sister investigates and destabilizes the concept of the ‘self’, specifically her own self as an Afrikaans speaking woman in contemporary South Africa. Steyn plays with the various ambiguous associations of the Koeksister in the same way as the sweet, deep-fried dough finds its knotted shape. 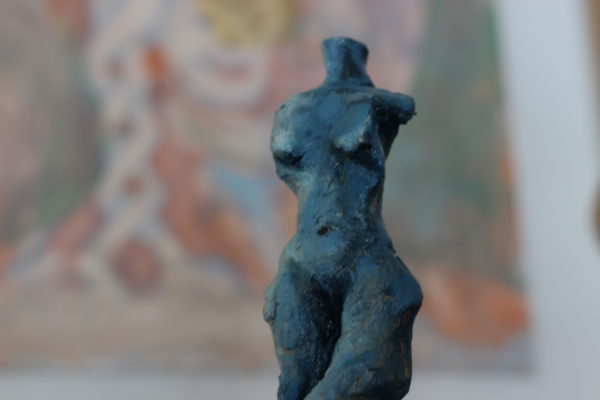 In 2003 the Koeksister Monument was erected in Orania as a nasional symbol, but it is important to note that the koeksister originally reached South African shores with the Malay slaves.  Steyn’s fascination with the origin of the koeksister becomes a fascination with the idea of a “self” that is, according to her, more complex and dynamic.  The female association with baking is also highlighted and disrupted in this series: the legs of female figures in yoga positions morph into koeksisters. The figures appear transfixed in their standing positions, perhaps trapped within the limits of stereotypical expectations of women and their role in society. 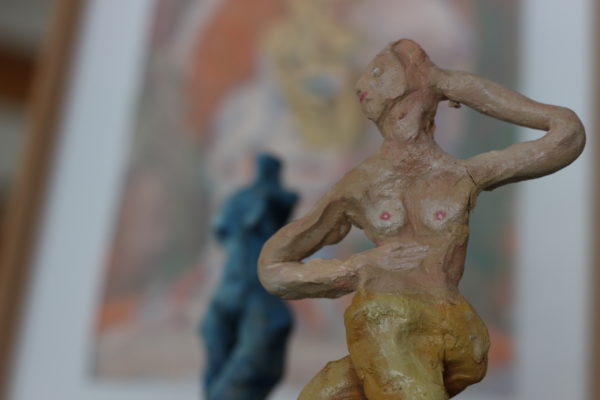 Their legs, knotted and crossed repeatedly, also remind of the conservative warnings directed at women. 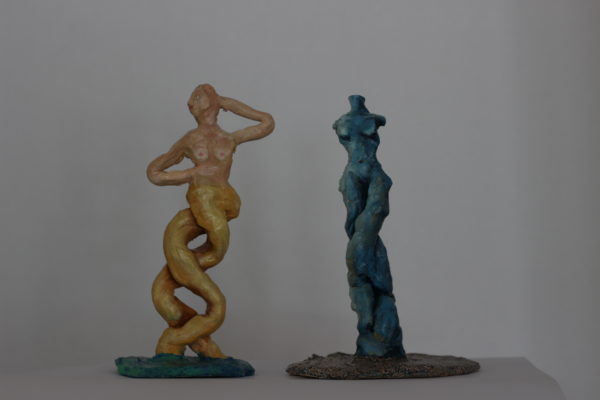 Steyn’s use of yoga positions can be seen as a silver lining; the philosophy of opening yourself up and committing to your surroundings becomes in a way an alternative approach to the concept of the “self”.

Marlene Steyn is known to produce immersive, installation-based experiences, cultivating an expectation for her ever increasingly fantastic, constructed worlds. Her distinctive iconography takes shape through unsettling, established ideas surrounding themes of psychoanalytic theory, certain historical narratives of art as well as popular signifiers, borrowed from contemporary culture. Adept at choosing telling details, Steyn reviews familiar objects to create uncanny motifs through repetition and unpredictable combinations. Using anchor points such as the androgynous figure, the fried egg, and braided ropes of hair, Steyn reinforces the symbolic visual language that has become the cornerstone of her practice. 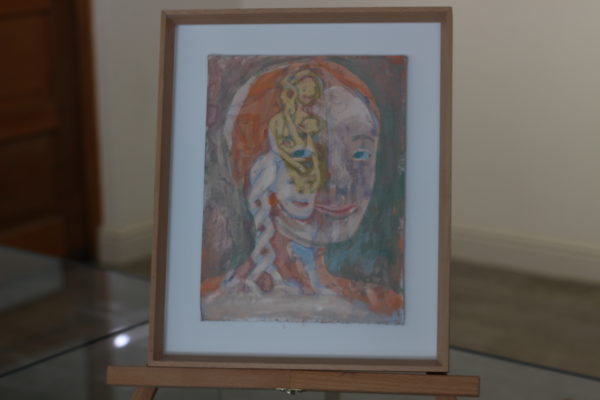