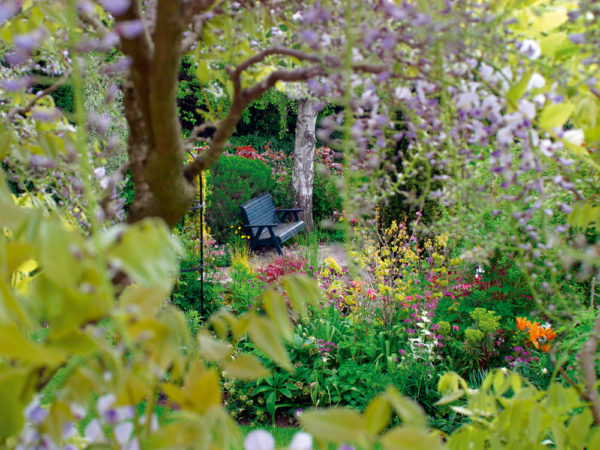 “Daviiiiiid!” shouted someone through the letter slot in the green door of my slave cottage in Herte Street. Even before reaching the door, I could smell the garlic. Dorothy Johnman fervently believed that every day should start with chewing cloves of raw garlic. “Dinner at eight? We have a guest.”

Nobody turned down an invitation to dine with the Johnmans because their house was the cultural epicentre of Stellenbosch in the 1970s. And so, at eight, I sat down to dinner with Dorothy, her husband, Charles, and Pierre Fournier, the famed French cellist. Except for the chicken, the entire meal came from her garden: Jerusalem artichoke soup, a riotous salad of greens, new potatoes and fava beans, the chicken infused with old-fashioned lemon rind and basil. I remember every word, every anecdote clearly, but what remains as the most indelible memory was the smell – no, the perfume – of a vase of weeping sage, the mauve flowers glowing in the candlelight.

Dorothy’s garden was Dickensian, a warren of foliage through which one expected Miss Havisham, that forlorn character in Great Expectations, to appear in a faded wedding dress and wearing only one shoe, looking for her lost love. Paths went nowhere, rose thorns tugged at your clothes and you had to be careful not to trip over the ancient furrows bringing water from the Eerste River. Much like Carl Linnaeus’s home in Uppsala, Sweden, Dorothy’s garden was a living calendar, the seasons brilliantly illuminated by colour and smell. I vividly remember, along the length of the house, a bed of chrome-yellow Florentine irises shimmering in the soft light of spring.

After Dorothy’s death, the garden fell into neglect and was criminally stripped of its jewels. But recently, with the guidance of Pietman Diener, the superb horticulturalist at Rustenberg, it is being resurrected and is beginning to show its former glory. If there is one secret garden in Stellenbosch that reflects the heyday of imaginative gardening in this Winelands town, surely it is Dorothy Johnman’s glorious creation.*

Just over the fence from the Johnmans’ property is what remains of the Voorgelegen garden, a sad relic of its former glory. Accessible from an entrance just off Die Braak, it is worth a visit simply to marvel at the spectacular combination of two majestic trees. As you enter, these ancient giants loom at the far edge of this once beautiful garden. On the left, a camphor and, intertwined on the right, my absolute favourite tree in town. Although it looks like a eucalyptus, it is actually an apple myrtle or rusty gum Angophora costata. True companions, these magnificent structures define the entire space.

Although not entirely secret, the Stellenbosch Botanical Garden is one of the hidden jewels of our town. This academic institution serves a vital role in the training of young science students, conducts cutting-edge research on endangered plants and serves as a repository of precious historical plant collections. Since it is open to the public, it also serves a vital social function. A casual stroll along its leafy paths quickly proves its spiritual value, with love-struck couples lolling on the lawns, the elderly from nearby retirement homes dreaming in the sun and, most importantly, toddlers and children being properly earthed by simply being in touch with living things.

Much like the botanical garden, the Jan Marais Nature Reserve, although not strictly a formal garden, surely qualifies as one of our town’s botanical jewels. This is the only remaining example of the vegetation that the very first settlers encountered when our town was established. We can be eternally grateful to Marais for securing this precious heritage, more than a hundred years ago.

When next you are in our lovely town, make time to visit our secret gardens. Gardens are our living links with the past, imbued with the characters of those who moulded them, and most importantly, they give flight to our innermost desires to be in touch with the living Earth.

* Viewing by appointment only; www.johnmanmusiccentre.co.za

For more local personalities, lifestyle features, events and happenings in and around Stellenbosch, subscribe to our newsletter.

The architecture of trees with Dave Pepler

Will the guava make a comeback?