Clifford Roberts explores a new concept for South Africa: a wine-tasting emporium that showcases exclusively the wines of Stellenbosch, all under one roof.

Some 50 years in existence, Stellenbosch Wine Routes has seen great changes in the local wine industry. And not just seen, but been the prime instigator of those changes. Who can now imagine exploring the Cape Winelands without stopping at each wine estate, on whatever route you may take, to sample its wine offerings under knowledgeable and enthusiastic guidance? Without pausing for a delicious and wholesome locally produced lunch at an estate’s restaurant? Such are the pleasures of a day out, meandering along a wine route.

But not everyone has the luxury of being able to take the time. And, once again, Stellenbosch Wine Routes, together with De Warenmarkt, has come up with a novel idea.

March saw the official opening of a showroom – an emporium – that is dedicated exclusively to the wines of Stellenbosch. The concept is the first of its kind in South Africa and its timing could not have been better.

The heart of the experience is the opportunity for visitors to taste more than 100 local wines, served by experienced sommeliers. The emporium also has an online store where the wines will be available at cellar door prices, for delivery across South Africa and to international wine lovers.

“This represents a major expansion of the Simon Wine Bar,” says Daniël Kriel, co-owner of De Warenmarkt, which will be the home of the new emporium. “We’ve made a substantial investment because this is probably the best offering in South Africa.” The idea of a partnership was first floated before the arrival of Covid-19, so the project has been a long time in the making.

According to Stellenbosch Wine Routes manager Elmarie Rabe, wine experiences of this kind are commonplace in the world’s top wine regions. “The time is right for Stellenbosch to lead South Africa into this fold,” she says.

Research shows most visitors spend two or three days in Stellenbosch before moving on to explore other parts of the country. The bulk of them are international tourists and domestic travellers. “The emporium offers what international visitors have come to expect from world-class destinations: an opportunity for people with limited time to get an introduction to the Stellenbosch Winelands at a single location.

“The experience itself is world class and with visitor numbers gradually recovering, its opening is timely,” Elmarie says.

The emporium’s extensive wine selection was compiled in collaboration with various local specialists with a view to exhibiting not only the diversity and depth of Stellenbosch’s wine landscape, but also the variety of themes that run through it. The selection incorporates Cabernets from the Stellenbosch Cabernet Collective, old-vine wines from Stellenbosch, administered by the Old Vine Project, and a special collection of the region’s iconic wines.

The collection and design of curated tastings according to themes will enable visitors to compare, for example, the various regions of Stellenbosch through a comparative tasting of, say, Cabernet Sauvignons, Chardonnays or Chenin Blancs.

A weekly theme will guide tastings and promotions as a point of interest and tasting notes will be available digitally too. The themes are Sauvignon Blanc, Chenin Blanc, Chardonnay, Cabernet Sauvignon, Pinotage, Shiraz, Blends, Old Vines and Icons. 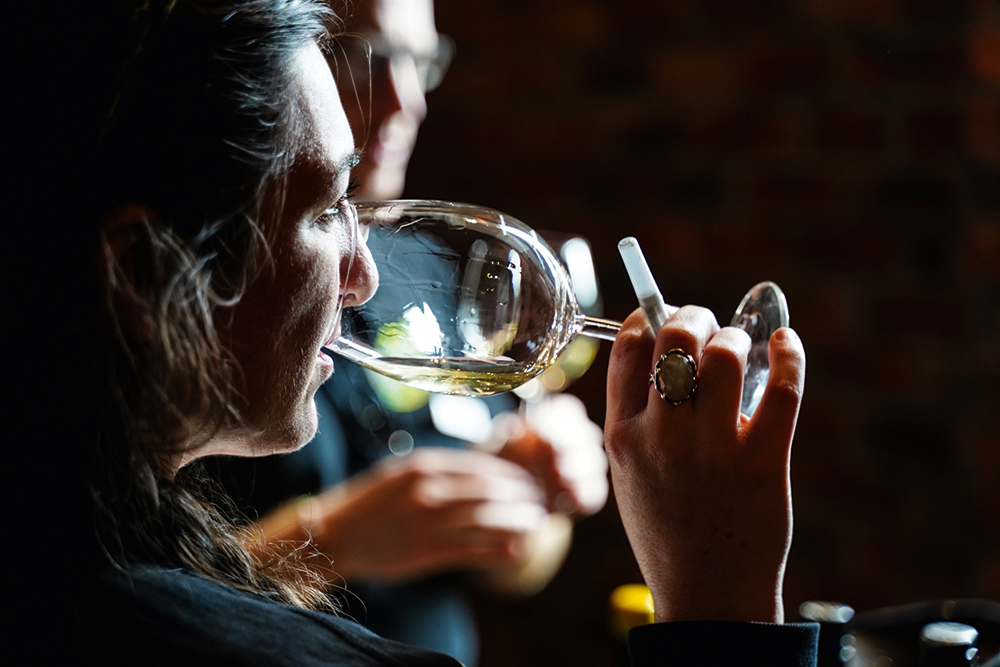 Among the icons offered are Kanonkop, Alto Rouge, Thelema, Vriesenhof, Le Riche, Delheim, Simonsig, Hartenberg, Kaapzicht and Beyerskloof, to name a few. Visitors will be assisted by the wineries’ own tasting room staff, who have been seconded to provide first-hand expertise at the emporium. The service will later be incorporated into the Stellenbosch Wine Routes’ sommeliers programme.

The location of the emporium, at the corner of Ryneveld and Van Riebeeck Streets in Stellenbosch, is especially significant. Under the De Warenmarkt roof, it joins a collective of diverse merchants inspired by the Cape of Good Hope’s legacy as a trading post along the maritime route to the alluring Spice Isles. Underlining this spirit is the building itself. Constructed in the 18th century, it remains at the nexus of Stellenbosch’s vibrant cultural district. The ‘Simon’ in the emporium’s name hails from the town’s founding father, Simon van der Stel.

“We have always felt strongly about supporting local wine producers in our restaurant, which is why we were the first to have a wine list comprising only wines that are Wine of Origin Stellenbosch,” says Daniël.

“Building ties has also meant the hosting of many wine events. At the end of last year, we hosted a dinner featuring Kanonkop greats Beyers Truter, Jan Boland Coetzee and Abrie Beeslaar. We pay tribute to legends of the industry by our listing of many wines no longer available commercially. The emporium is a natural progression on this journey,” he adds.

“We are exceptionally proud and excited about this latest milestone,” says Elmarie. “We believe it will be an integral part of the future wine landscape, and Stellenbosch has a 50-year history of promoting local wines to established wine lovers and potential newcomers alike.

“It was Stellenbosch producers who pioneered the very concept of a wine route in South Africa and since then they have led in many other fields too. The tasting emporium continues not only this tradition, but also the tradition of collaboration that has always been part of the success of the Stellenbosch Wine Routes.”

Digital learning: what's available and is it any good?

Quoin Rock: immerse yourself in luxury