Remarkable Rooibos, the humble heritage drink from our harsh mountain slopes, has developed a worldwide following, yet it remains a hardy South African.

This is an honest-to-goodness South African story about a proud heritage shaped by nature, history, tradition, and human ingenuity.

The miracle that became Rooibos is rooted in poor soil in the harsh reaches of the Cederberg; it grows amid the phantasmagorical rocks and is tended by the hardiest of humans. Will, however, the true story ever be revealed of how far back into history its roots can be traced? Will we ever know who were first keepers of its medicinal secrets? The Rooibos plant, Aspalathus linearis, does not shed its mystique easily and much remains a mystery.

What we do know is that, since the beginning of the 20th century, the most unlikely people have played their part in nurturing Rooibos to become the beloved beverage of South Africans and a cult drink in many distant cultures.

The fathers and mothers of Rooibos

The Cederberg’s earliest residents, the San, lived in the region at least 10 000 years ago. Their descendants – and those of the Khoi pastoralists some 2 000 years ago – were attuned to living off nature and depending on the plants in the inhospitable mountains for cures. Westerners who trekked north from the Cape of Good Hope to the Cederberg found in Rooibos a more than worthy substitute for the unobtainable Oriental teas for which they yearned.

In 1904, it sparked off an idea in a young Russian immigrant, Benjamin Ginsberg, whose father owned a trading post near Clanwilliam, at the foot of the Cederberg. Benjamin had ties to the family who were purveyors of tea to the Russian Czar and he saw the potential in the ‘bossies tea’ brewing day-long on the coals in nearby rural households. “I’ll turn the Cederberg into the new Ceylon!” he vowed. Benjamin used Chinese and Indian methods to dry the leaves and, surprisingly perhaps, to today’s marketers, he even realised the importance of presentation. His first packaging, inspired by his pocket watch and designed by Benjamin himself, is still in existence.

A hundred years ago, however, the Cederberg was no Ceylon. Not yet. Harvesting was back-breaking work, and nature dictated the terms. People living in hamlets like Wupperthal picked the needlelike leaves from plants growing wild on the mountain slopes. Down in the village the leaves were finely chopped, bruised with heavy mallets and then left to ‘sweat’ in tightly packed and -covered heaps. This fermentation changed the colour of the leaves to deep amber and released the rich flavour. The leaves were then dried in the sun before being bagged for selling to local storekeepers. Today, Rooibos producers follow much the same process, although ‘sweating’ is now called ‘enzymatic oxidation’ and the leaves are steam-pasteurised.

To realise the mercantile potential of Rooibos, it became essential to grow the plants commercially. But, oh, the challenges. The first almost brought the venture to an end before it started: the seeds refused to germinate. Until a certain eccentric country doctor arrived in Clanwilliam and cracked the secret code of the recalcitrant seeds. Educated in Stellenbosch, Dr Pieter LeFras Nortier was a district surgeon with a heart for struggling communities and a fine, enquiring mind. In 1929, he set about solving the Rooibos seed enigma. He observed that, when ripe, the tiny seedpods burst open and scatter the minuscule seeds widely around the plant. But collecting enough to fill a mere matchbox was gruelling labour.

Another breakthrough occurred at the right time. Katryntjie Swart, a local woman who, like her indigenous forebears, had a close relationship with nature, saw ants carting off the seeds and she followed them to an ant-heap. Breaking that open revealed a granary full of seeds! If only those seeds would germinate… After many fruitless experiments Dr Nortier tried scraping away the hard scales and sowing only the soft kernels. Eureka! The seeds sprouted, the ‘riddle of germination’ had been solved.

Rooibos was on its way to the future.

Looking for a hero

During World War II, when Ceylon tea became scarce, Rooibos grew in popularity, but it was still a poor person’s drink, a surrogate for ‘real’ tea. Rooibos needed an entrepreneur like Annekie Theron. This mother stumbled upon one of the health benefits of Rooibos in 1968, when, at her wits’ end, she gave Rooibos tea to her colicky baby. The wholesome brew soothed the crying infant immediately. Of course, Annekie was not the first to discover the medicinal qualities of Rooibos: communities in the Rooibos regions had been using it for years as a remedy for various stomach ailments, from baby colic to indigestion, but few outsiders knew this. Annekie was so passionate about telling the world about the wonders of Rooibos that consumption increased by 29 percent during 1969. More importantly: Rooibos was transformed from a cheap substitute tea to a drink with status. Dr Annique, as she became known, next used its anti-allergenic qualities to create a health and beauty business empire with Rooibos as the basic ingredient of her products.

To your good health

Rooibos is a natural pharmacopoeia, a veritable home pharmacy. For many ailments Rooibos brings instant relief; and not just as a beverage. 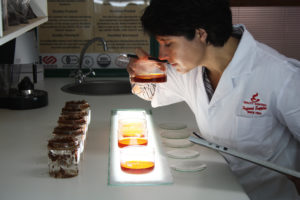 You can bathe in it, apply it to alleviate nappy rash, eczema and sunburn, even inhale the steam from a brew to relieve sinusitis and respiratory problems.

It relieves stress and, as it is caffeine- and tannin-free, you can drink as much of it as you fancy. In fact, you are encouraged to drink at least six cups of Rooibos per day.

The long-term health benefits are brought about by its anti-oxidants, which help fight heart disease and reduce the occurrence of cancer and diabetes. By boosting the immune system, Rooibos helps fight various other diseases, too.

Rooibos has built up a loyal following in a health-conscious world. In Europe and elsewhere, the smartest hotels give you a choice of several Rooibos flavours. Americans can walk into a Starbucks and order a Tazo Vanilla Rooibos Tea Latte. And in Malaysia a museum has been erected in honour of the tenacious Dr Nortier. South Africans share a special love for Rooibos and the rest of Africa followed suit when Mma Precious Ramotswe (the heroine in The No. 1 Ladies’ Detective Agency book series) declared Rooibos her drink of choice: “This is a tea for people who really appreciate tea. Ordinary tea is for anyone.”

Locally, we are honouring this heritage beverage more and more. An agritourism Rooibos Route has already opened. The worldrenowned ‘rieldans’ group, Die Nuwe Graskoue Trappers, was chosen as the face of Rooibos. The first National Rooibos Day was celebrated on 16 January 2017 in Clanwilliam, the Rooibos capital.

Rooibos, with its manifold uses, has become Big Business – and everybody wants in.

This started in 1999, when the Rooibos ‘brand’ came under threat by American businesses that wanted to trademark the name. The South African department of trade and industry entered the fray, and Rooibos was registered here under the Trade Marks Act. In order to further protect the Rooibos trademark – and its role in the heritage of this country—the South African Rooibos Council obtained geographical indicator status from the European Union in 2014. This means that Rooibos, just like French Champagne, Spanish Sherry and Portuguese Port, can now be called Rooibos only if it comes from the fynbos region of South Africa. This protection still has to be extended to the rest of the world.

The issue of intellectual property has also become pressing locally. One of the tantalising questions concerning Rooibos is who first started using it not only as a drink, but also for its health benefits?

Searching for historical data has proved so much more difficult than reading tea leaves or searching for those tiny Rooibos seeds in sand.

The department of environmental affairs commissioned pioneering studies of traditional knowledge associated with Rooibos. Professor Nokwanda Makunga, from Stellenbosch University, conducted the study with the help of the Cape Bush Doctors Association and included a survey on traditional and current uses of the Rooibos plant in the Cederberg region.

Researcher Boris Gorelik, working on a Rooibos encyclopedia, trawled the archives and spoke to residents of the Cederberg and Suid-Bokkeveld areas to compile a study for the South African Rooibos Council. After consulting written records extending over centuries as well as various experts like ethnobotanists and local communities, he came to the conclusion that convincing information has not yet been unearthed to help us understand how the Rooibos plant was used in pre-colonial times.

Even if we don’t know its history, this much we know is true:

Rooibos is South African through and through. It grows nowhere else in the world in the wild. This makes this hardy plant, which thrives in the harshest of conditions, in poor soil, under extreme temperatures and through droughts, a real survivor. A true South African.