“My top priority remains our people – our students and our staff. Without them, there is no University. That is why I will continue to promote their success and development,” Prof Wim de Villiers said after being reappointed Rector and Vice-Chancellor of Stellenbosch University (SU) for a second five-year term on Wednesday (25 September 2019).

The SU Council took this decision at its third scheduled meeting of the year in Stellenbosch. The vote was unanimous, after the Institutional Forum and Senate, statutory bodies of SU, had earlier recommended the reappointment of Prof De Villiers. His second term will start on 1 April 2020 and last until 31 March 2025.

“We are very pleased with the accomplishments of Prof De Villiers to date,” Council Chair Mr George Steyn said. “With him at the helm, SU has excelled in key areas. He has also proposed a compelling vision and set of priorities for his second term, which will further help the University address major challenges.”

During Prof De Villiers’s first term, access to SU has been broadened, record numbers of qualifications have been conferred, and high levels of student success and research outputs have been maintained. Internationalisation has increased, financial aid for students has been extended, campus renewal has made steady progress, and SU continues to excel in sports and culture. 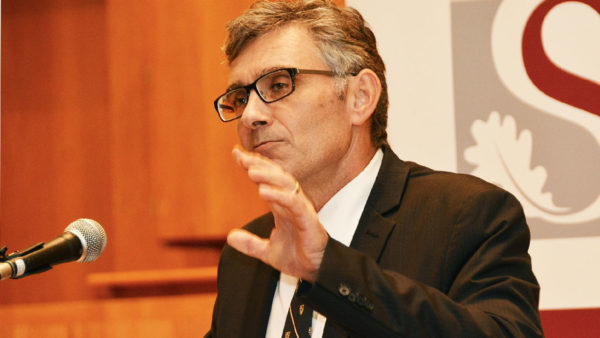 “Our staff and students deserve credit for their hard work and dedication that has brought us this far. My appreciation to everyone who has been helping to build a strong institution,” Prof De Villiers said.

Does Prof De Villiers, who turns 60 today (26 September 2019), plan on continuing his personal efforts to raise bursary funds for students? Among others, he completed the Cape Town Marathon, the Cape Town Cycle Tour (twice) and a cycling trip from London to Brighton in aid of this deserving cause during his first term. “I have lots of energy left to tackle all our challenges and make the most of our opportunities,” he says with a smile.

Prof De Villiers is asking friends, colleagues, staff and alumni not to give him birthday gifts, but to instead make a donation to the Die Vlakte Bursary Fund (visit Givengain for more information).

In 2015, when he first became Rector and Vice-Chancellor, Prof De Villiers initiated a bursary fund for descendants of residents of Die Vlakte, a Stellenbosch residential area adjacent to and overlapping with the University’s campus which fell victim to forced removals in the 1960s. So far, 31 bursaries have been awarded to SU students, amounting to nearly R1,4 million. 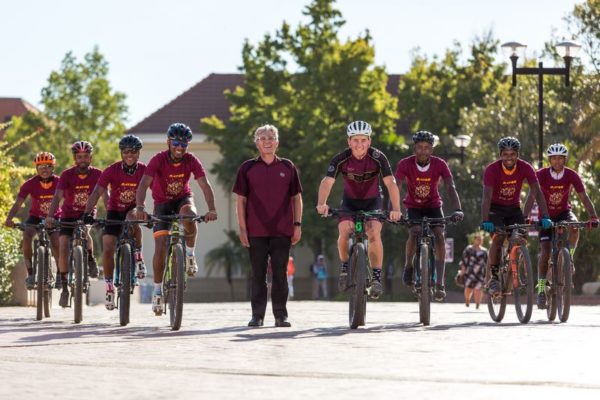 Further highlights during Prof De Villiers’s tenure so far include the establishment of a School for Data Science and Computational Thinking in July, the University’s Centenary project in 2018, and the development of a new vision and strategic framework for the foreseeable future, which took effect at the start of the year.

The reappointed VC’s own vision for his second term is aligned with the University’s Vision 2040, namely to turn SU into Africa’s leading research-intensive university, globally recognised as excellent, inclusive and innovative, where we advance knowledge in service of society.

The University improved its overall position on the latest Times Higher Education World University Ranking released on 11 September 2019 – rising from the band 301–350 to 251–300. This places SU in the top 1% of universities globally.

With his list of priorities for his second term, Prof De Villiers aims to see the University thrive. These include further strengthening SU as a research-intensive institution, and increased digitalisation by expanding hybrid learning and teaching as well as new computer systems for finance and student administration.

Prof De Villiers expressed appreciation for the confidence shown in him. “We have major challenges ahead, but also wonderful opportunities. It is a privilege to be able to lead SU on our new journey into the future.”