THERE’S A CERTAIN KIND of buzz at SnapScan’s offices in central Cape Town. It electrifies the air and bounces off the windows of the boardroom where Kobus Ehlers, 29, is sitting, holding the key to his success: a mobile phone. “These things are here to stay,” he says, waving the device with a grin, “and they seem to be impacting the world in many ways.”

One of those ways is fast becoming Kobus’s claim to fame: an innovative, proudly South African app called SnapScan. You’ve probably seen the logo on a coffee-shop counter somewhere – and if you haven’t, it’s time to start looking. Why? Because the simple, three-square symbol is the key to making realtime payments with your mobile phone – no paper, no plastic and, indeed, no problem.

Since it launched in January 2013, the app has already been snapped up by more than 15 000 merchants and over 100 000 customers, and it currently processes a few million rand in trans- actions each month. Not bad for a product created by a bunch of guys under 30 …

How did they come up with it?

Like Facebook, SnapScan’s journey began in a university res room. Specifically, in the Stellenbosch University residence Eendrag, where first-year BA student Kobus met his future co- founder, Gerrit Greeff, who was studying computer science, in 2004. He also met fellow resident Malan Joubert, who was work- ing on a software security company called FireID (now the incubator for SnapScan), as well as several other future collaborators.

“By December 2012, we’d formed a team with a specific set of skills,” says Kobus. “We all had experience in banking and payments, as well as mobile applications. So we sat down together and said: ‘What interesting problems in society can we solve with our particular skills and resources?’”

The problem they identified was simple but far-reaching: many small merchants in South Africa couldn’t afford to use formal financial systems, such as card machines, which involve monthly rental fees, as well set-up and account fees.

“People like the guys selling fruit on the side of road form a significant part of the South African economy,” says Kobus, “so we wanted to give them access to formal infrastructure.”

The team started by asking a simple question: can I go out and buy a cup of coffee using only my phone?

“At the time, it just wasn’t possible,” says Kobus, “so we decided to try and make it possible. We didn’t know what the value would be if we got it right, but we felt that there could be value in it.”

Having come up with the idea, you might imagine that they spent the next few years perfecting their product … but you’d be wrong. In just two weeks, the team had built a basic working app and sent it out into the real world.

This may seem like jumping off a bridge without checking the bungee cord. But sometimes, says Kobus, it’s the quickest way to find out if you can fly.

“One of our principles is agile development,” he says with a grin. “Build something that’s just, just good enough and then see how the market responds to it. It’s a very quick process and we’re constantly reinventing elements, but it works.”

The app’s first testing ground was a coffee shop in Stellenbosch, where the team soon encountered their first issues. “We expected that to happen and we’re ready to adapt,” says Kobus. “It was designed to have issues … we just needed to figure out which ones mattered and which ones didn’t.”

After four or five iterations, the product was ready for slightly larger markets literally like the Slow Food market at Oude Libertas and the Root 44 Market at Audacia Farm, in Stellenbosch. This process allowed the team to figure out not just the technical aspects of SnapScan, but also the business aspects: why people would use it, how to attract customers and merchants, what the value proposition would be and how the business itself would make money.

“Normally if you have a product, you figure out who the customer is and you sell it to them … so if you want apples and I have apples, I’ll sell the apples to you and that’s that,” says Kobus. “But with SnapScan, we had to solve two problems at the same time. We had to convince both the merchants and the customers to adopt the system. It was one of those chicken-and-egg situations.”

Think about it: would you, as a customer, install an app that couldn’t be used anywhere? Of course not. And if you were a merchant, would you sign up to use a payment system that had zero customers?

“We got around that problem by understanding who the primary user is, and that’s the merchant,” says Kobus. “We realised that if we added a lot of value and made it worth their while, then the merchants would help convince the customers to use SnapScan.”

Then there was the issue of security: no one’s simply going to trust you with their cash from the get-go. Luckily, any potential concerns were swiftly addressed when Standard Bank came on board in May last year.

“If you’re a small business building a secure payment system, you either need to have an enormous amount of money, or you need to find the right partner,” says Kobus. “That’s why Standard Bank was key – we’re good at rapid innovation and problem-solving, and Standard Bank’s good at being a bank and knowing how to roll a product out to the whole of SA.”

As SnapScan scanned its way across the country, it started getting quite a bit of media attention. But it was only when the team entered it into the 2013 MTN Business App of the Year Awards – and it won – that people really began to take note.

“Merchants started approaching us, saying: ‘I want this for my business’,” recalls Kobus. “That was when we realised that SnapScan was no longer an experiment – we were going to build a business around it.” 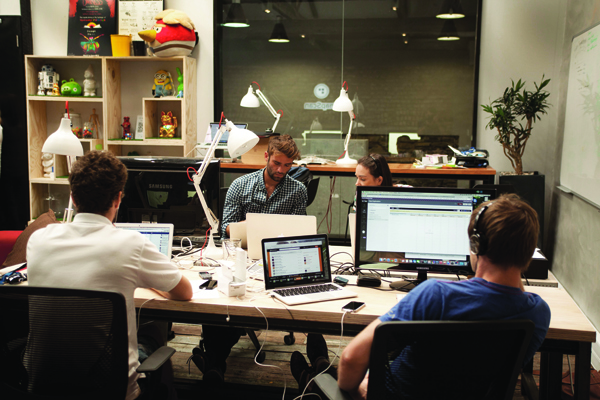 So who’s in business?

Another recent application of SnapScan is the payment of posted bills. “You can pay your Pathcare bill as soon as you receive it by scanning a QR code on the letter,” says Kobus. “We started offering this option – for store accounts and so on – in November 2014, with about three companies live by December and another 20 or so in the pipeline for the beginning of 2015.”

It’s a constant evolution and nothing is sacred – not even the need to snap or scan! Kobus recently started rolling out iBeacon payments, which will remove the need for QR codes entirely. “If you walk into a merchant’s shop, your phone will immediately detect the availability of SnapScan and pop up with the option to pay,” he explains.

But the core of SnapScan’s success, “so far”, cautions Kobus, isn’t its cutting-edge technology. It is its people.

“We have a team of really competent, committed people who care about what they do,” Kobus says. “We also focused on addressing a real problem rather than simply creating a product. It’s about the 15 000 merchants out there who need and use our product – it’s not actually about SnapScan at all.”