They are three of the most influential thinkers in South African sport. In each of their fields they are redefining the role of women in sport and are respected worldwide for highlighting the position of sport in our society, challenging the traditional views of sporting success and developing a new performance science. Stellenbosch is at the heart of the ground-breaking work being done by Ilhaam Groenewald, Elana Meyer and Dr Sherylle Calder. 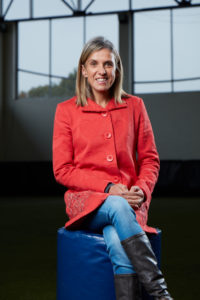 As one of the world’s legendary distance athletes, Elana Meyer was hailed for her unwavering commitment to excellence in her sport. And it’s this same passion that she brings to Endurocad, South Africa’s first academy dedicated to unearthing and fully developing the country’s distance-running potential.

“We have so much talent in South Africa, but we are not seeing the performances we should. Traditionally we had a wealth of distance runners winning Olympic and big city marathons, but we’ve since been through a bit of a drought in that area. We should be up there competing for medals,” says Elana.

“So four years ago I launched Endurocad specifically to assist with the development of athletes and we’re moving in the right direction. This year we hosted our first girls-only high performance assessment camp, to which we invited 20 highly talented girls from across the country and tested them physiologically and psychologically. This is a generation of young people who want to perform well and I’m looking forward to seeing them mature. We have the calibre of women in the country to do really well at the international level. In 2012, we had only three women who ran Olympic qualifying times in the marathon. Last year we had eight.”

A key part of Elana’s message to young female athletes is to chase excellence and not the financial rewards that have become associated with the professional era. “The rewards will come when you achieve excellence,” she explains. “Become excellent at what you do and you will benefit financially from it. You need to be driven by the passion to be committed to something that takes so much out of you. There are few things you achieve overnight, but in this age women athletes now have the opportunity to go as far as they want to.”

Elana herself was inspired as a nine-year-old while watching a young Nadia ComЛneci at the Olympics. “That’s what motivated me, and my initial dreams in sport lay in gymnastics. I come from Albertinia where a balance beam wasn’t readily available, so I started running.”

The women around her also fuelled her desire to achieve excellence in athletics. “There was a long road of isolation, which meant missing out on the 1984 and 1988 Olympics. But in South Africa, women’s athletics was very strong with myself, Zola Budd and Colleen de Reuck, so I grew up in a generation of strong and competitive female athletes.

“I had an incredible mom who instilled in me the belief that I can do anything I want to. The greatest gift I got from my parents was a feeling like being in the circus, where I could do big tricks because there was always this incredible safety net if I fell. They gave me unconditional love and support whether I won or lost. That’s the gift that we, as mothers, coaches and teachers, need to give youngsters. Encouragement to be brave and bold and to try.”

Elana is also a firm believer that waiting for the perfect moment to do anything often means you’ll end up doing nothing, whether it’s chasing funding for Endurocad’s goals or making that first break that defined her iconic 10 000m race with Derartu Tulu in the 1992 Olympics.

“You will never be totally ready to take that step,” she says. “You’ll have very few chances in life to be perfectly prepared, to have this perfect moment to execute something amazing. You have to take that brave step and just do it. Often I do something that most people don’t because they’re too scared it won’t be a success. I’m not scared to put myself out there. I believe in being the rainmaker rather than waiting for the rain to come.” 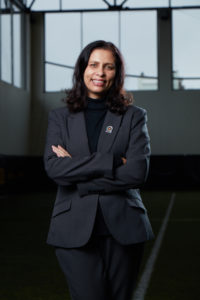 In the fast-moving world of Ilhaam Groenewald, it doesn’t matter that you are a woman in a male-dominated environment. What does matter is that you are adding value; the kind of value that she herself has shown in becoming the first woman to be voted onto the executive council of the South African Rugby Union and the second female president of University Sport South Africa. The kind of value that brings increased participation and transformation to all sports at the University of Stellenbosch.

“As women, we need to focus on the value we add and the different skills we bring. We need to set our own standards,” says Ilhaam, a straight-talking, fast-thinking person who believes very strongly in getting the job done and doing it right.

She is also not one to pay too much attention to the accolades of being a pioneer for women in the sports environment. In fact, she readily admits that she doesn’t know what all the fuss is about. “I believe there are many women out there who can do even more than I am doing today. We must find them and nurture them and see what difference they can make,” she says.

This is why she is driving the new Academy for Girls’ Leadership and Sport Development at the University of Stellenbosch. It’s what forms the core of her belief that women should define their own role in sport and not have it defined for them.

“It’s about us as women not allowing the fact that we work in a masculine environment to continuously have an impact on us moving forward,” she explains. “We tend to move into a space where we almost want the male figure to recognise us for the fact that we’ve now arrived. That should not be the case. We have arrived because of our own strength and ability to contribute. That’s the standard I set for myself.”

A thirst for knowledge and a willingness to form partnerships and ask questions are at the heart of Ilhaam’s success. “When I seek knowledge, you need to be prepared for me. When I got involved in Varsity Cup rugby, the little I knew about rugby came from the games I watched. I sat in meetings where we discussed rules and rule changes and I asked questions. I’m passionate about lifelong learning and learning from people.”

She believes implicitly in the value of university sport and its role in defining effective transformation at the national level. “When I was involved with SASCOC, I helped to draw up the first draft of the Transformation Charter. I believe it’s a good document, but each one of us must take it and make sense of it in our own environment.

“I started at Maties in 2014 and then we had only 11% black, coloured and Indian athletes. Last year we had 22% and this year we’re up to 32%. So it’s not impossible. Our recreation and active lifestyle unit increased our participation figures by 61% between 2014 and 2016 because we revisited the programmes and came up with new ideas.

“Transformation must come from the heart and we must move away from the numbers only game. We need to look at the qualitative aspect of transformation and what differences we can make in the lives of young people through transformation in sport. Transformation is a strategic imperative of this country, but there must be a holistic approach to it.”

In Stellenbosch, Ilhaam sees a university and a town still largely untapped in terms of its potential. “We are not yet taking all the number one positions, but we will get there. That’s what this town represents: adding value. People here are very connected and it’s up to us to tap into this even more. The initiatives that we currently have on the table give me goosebumps. And I ask you, is there anything more beautiful in the world than sitting in the Danie Craven Stadium as the sun is setting?” 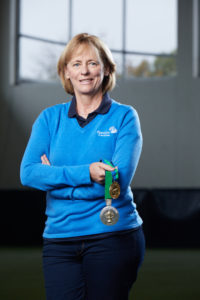 is often referred to as the most successful person in world sport, and it’s easy to understand why. Since pioneering her ground-breaking visual awareness performance training in the 1990s, she has worked with the world’s best sportsmen, sportswomen and teams. She’s won two Rugby World Cups, with England and South Africa, and has provided visual awareness training for the All Blacks, elite British Olympic athletes, America’s Cup yacht teams, Tottenham Hotspurs Football Academy, the Miami Dolphins in the NFL, F1 driver Valtteri Bottas and too many more to mention.
Sherylle’s current work includes assisting Eddie Jones in England’s preparations for the next Rugby World Cup, coaching at Bournemouth Football Club and improving the career of Miami Dolphins wide receiver Kenny Stills, who after working with her had his best season ever and sent her a signed jersey with the words, “Thanks for adding the edge to my game”. “If I can add an edge to one of the NFL’s greatest players at the moment, then I’m satisfied,” says Sherylle, who cares less for the praise than for the fact that her visual awareness science is a success.

It’s a science that was born out of adversity, which she believes is what shapes potential. “Sporting isolation was a blessing for me,” she explains. Having been denied her dream of playing hockey for South Africa in the Olympics, she took her prodigious skills to Europe and while there started discovering the science that would define her career. “Tough times build resilience and made me think of doing things I probably wouldn’t have done if I had been in a comfort zone. You don’t grow if you’re in a comfort zone.”

Whatever she does, whether it’s learning from rugby legend Danie Craven, one of her mentors, or counting the steps she takes to determine the most efficient route to her favourite coffee shop in Stellenbosch, or helping Ernie Els to win the Open in 2012, Sherylle is always looking to be just that 1% better.

“I just have this switch that never goes off. I believe that whether you are a sportswoman or a sportsman, if you are equipped to do what you do, you should have no fear. I call it smart training. South Africans are the most naturally talented sportspeople in the world. It’s just a question of whether we can consistently do the right things that lead to performance.” V