It is a classic business school case study: a small, vibrant brand with its roots firmly in South African soil is taking the world by storm. No wonder, that Stellenbosch venture capital company Invenfin jumped in early to become a significant partner in the BOS Brands success story.

BOS was always meant to be a global player. From the start, the small team behind one of South Africa’s best-loved brands set its goals far beyond the African continent – and this strategy is paying off. 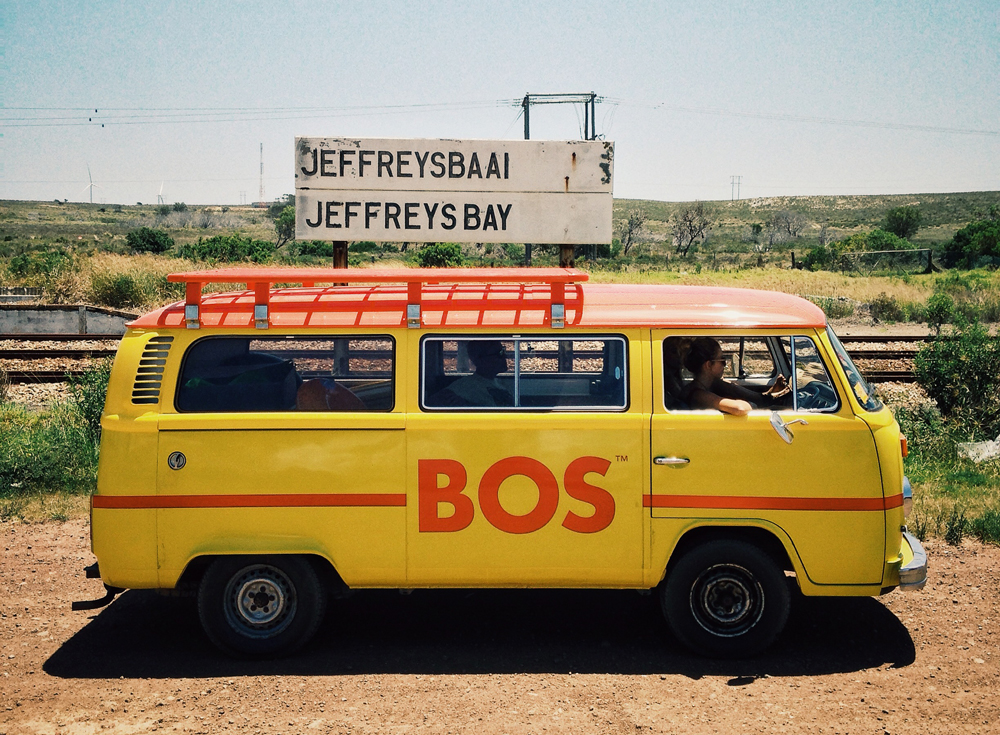 “We launched BOS in June 2010 with the mission to build a global beverage brand that takes inspiration from our South African roots and brings health and joy to thirsty people everywhere,” says CEO Dave Evans, who until recently lived in Stellenbosch. Within 14 months of launching in South Africa, BOS Ice Tea was on the shelves of more than 1 200 outlets, including Woolworths, Makro and Engen forecourts, as well as in a wide range of delis, bars and restaurants.

The early success of the BOS concept in South Africa was just the motivation the company needed to step out into the international arena. After careful consideration and thorough research, and with a strategic roll-out plan in the bag, in 2013, it targeted Belgium and the Netherlands as the first international market to be introduced to BOS. Once this operation was set up and running well, the business opened an office in Paris in 2016 and just last year started seeding BOS into California, USA, as part of its strategy to take on one of the biggest ice tea markets in the world.

“The potential for BOS is endless and extremely exciting,” says Dave. “We’ve achieved a 15% market share in South Africa, a country that doesn’t really drink ice tea.” South Africans drink 0.9 litres of ice tea per person per year compared to Americans, who drink on average 22.4 litres per person per year. In France, consumption is 8.3 litres and in the Netherlands, it is 13 litres. According to Dave, the market for ice tea in the USA is enormous, estimated to be worth about $10.7 million. “Just imagine the potential for BOS to capture a piece of that market!”

BOS is currently growing at 101% in revenue year on year in the territories outside South Africa (Europe and the USA) and by 120% on volume.

The BOS dream started to take shape in 2007 when Cape Town-based entrepreneur Grant Rushmere saw a gap in the beverage market for an ice tea made from organic South African rooibos; a product that would be both healthy and fun.

After developing the concept, packaging and business plan, he was ready to take the idea to market. First, though, he needed the rooibos and the capital to turn his dream of a proudly South African rooibos brand into reality.

In 2009, a mutual friend introduced him to organic rooibos farmer and entrepreneur Richard Bowsher and together they created BOS Brands Pty Ltd. Creative professional and Stellenbosch Art School graduate Marié van Niekerk saw the potential of BOS from the word go and was the first person to join the founding team as an investor and to head up the marketing of BOS.

Together with Grant, Marié played a crucial role in the creation of the iconic and engaging BOS brand and these days serves as the creative director at BOS. In May 2010, Marié and Grant delivered the first case of ice-cold BOS to their first customer, The Daily Deli in Cape Town – and the rest, as they say, is history.

A special tea from a special place

Rooibos, the magic ingredient in BOS Ice Tea, grows only in the Cederberg, a mountain range of rugged beauty and a UNESCO World Heritage site situated 350km north of Cape Town. In the first few years, all BOS’s organic rooibos came from the farm Klipopmekaar (meaning ‘one stone on top of another’). When Richard first set foot on this remote property, all that he found were an old bus, a ramshackle campsite and a few rooibos tea bushes. Nobody lived there. There was no running water or power supply, but Richard saw the opportunity to build a modern, progressive and sustainable organic rooibos farm from scratch and at the same time provide meaningful jobs to local people. Nine years later, BOS still sources its rooibos from Klipopmekaar, consuming more than 100 tons per year to make its nine flavours of ice tea.

The organic rooibos is harvested by hand and blended with a range of fruit and botanical flavours to create a variety of refreshing, ready-to-drink ice teas. Rooibos is naturally caffeine-free and sweeter than black tea (it has none of the bitter tannins), so it tastes great without the addition of much sugar.

With an approach of ‘go big or go home’, Richard and Grant managed to secure a contract to supply to Woolworths. This led to attracting their first investment from Stellenbosch-based Invenfin, the venture capital firm of the Remgro Group. The gamble paid off and soon afterwards they drew the attention of former Manchester United football coach Sir Alex Ferguson, who has strong ties to South Africa.

Attracting not only investors, BOS also caught the attention of Dave, the founder of the successful artisanal bakery Vovo Telo, when this ice tea brand was outselling Coca-Cola. After selling his share in the then national bakery chain to Famous Brands, Dave took on the challenge of becoming both an investor and the company’s CEO.

Speaking from her office in Amsterdam, where she and Dave moved a while ago as part of their expansion strategy, Marié says the BOS packaging, with its iconic design, remains one of their most significant assets and the most immediate connection with consumers. “People often fall in love with our brand purely because of our bright, bold, shopper-stopper packaging. For most people who encounter the brand on the shelf, it’s love at first sight. When they later start to peel away the other layers of BOS and learn more about the brand heritage, the magic of rooibos (which was named by Time magazine as one of the 50 healthiest foods in the world), the authentic link to South Africa and the company’s ‘giving back’ tree-planting initiative, all these aspects only deepen the connection and build on the powerfully positive first impression.”

She adds that the range of organic rooibos slimline cans is by far the most successful product. When BOS was launched in South Africa in 2010, the only drinks available in slimline cans were energy drinks. “It was a deliberate choice on our side to use slimline cans. This strategic decision, combined with the bright, bold colours and strong design, meant our product looked totally different from other soft drink brands on the shelves. It completely disrupted the ice tea and broader soft drink category and in that respect was very positively received by the public; it set a trend followed by the big multinationals.” The fact that the cans are 100% recycla­ble, Marié points out, was another key consideration.

An authentic brand with meaning

There is a universal shift in consciousness in an ever-changing world, a world where people are becoming more health-conscious and are aligning themselves to brands with real depth and meaning. “BOS has all of that,” says Marié. “We have a winning combination of a great-tasting product and, with rooibos as our magic ingredient, we have a truly authentic story to tell. We tell this story to the world in bold, bright, colourful packaging that stops people in their tracks and puts a smile on their faces.”

BOS has captured the spirit of South Africa: that feeling of living for today and celebrating the small moments in life. It clearly reso­nates with people all over the world who get to know this crazy, joyful, fun, bold, courageous and free-spirited brand. 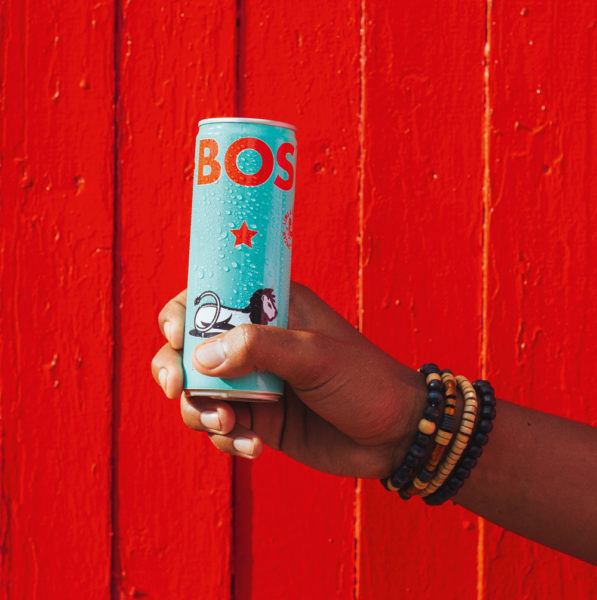 BOS is also giving back, planting and maintaining one tree in under-greened areas of South Africa for every 2 000 units sold. “To date, we’ve sold more than 52 million units of ice tea and have planted more than 25 000 trees with our partner Greenpop to help fight climate change,” says Dave.

What’s more, BOS directly employs 70 people in all its offices and supports about 150 jobs in South Africa through the supply chain.

“With rooibos as our special ingredient, we have been able to innovate even more. We have just launched a new range of sparkling unsweetened ice teas that contain no sugar, no sweeteners and no caffeine,” says Dave. “Early signs from the market are positive and we believe this new product will once again shake up the ice tea and broader soft drink category. What people can expect from BOS in the next couple of years is lots of innovation with new flavours, packs and products. To this, we’ll add some fun marketing campaigns to delight our fans and encourage people to go BOS!”

• BOS is supported by Invenfin, the VC arm of Remgro Limited. It says on its website “we invest in remarkable people who are building world-class businesses, helping them to scale globally”. We can certainly vouch for that.