Building on true family heritage, Glenelly Estate’s Nicolas Bureau, grandson of May de Lencquesaing, has happily immigrated to South Africa and settled into the Stellenbosch way of life. The farm’s CEO tells Julia Hunter about his family’s new lifestyle and why the Winelands hold such appeal. 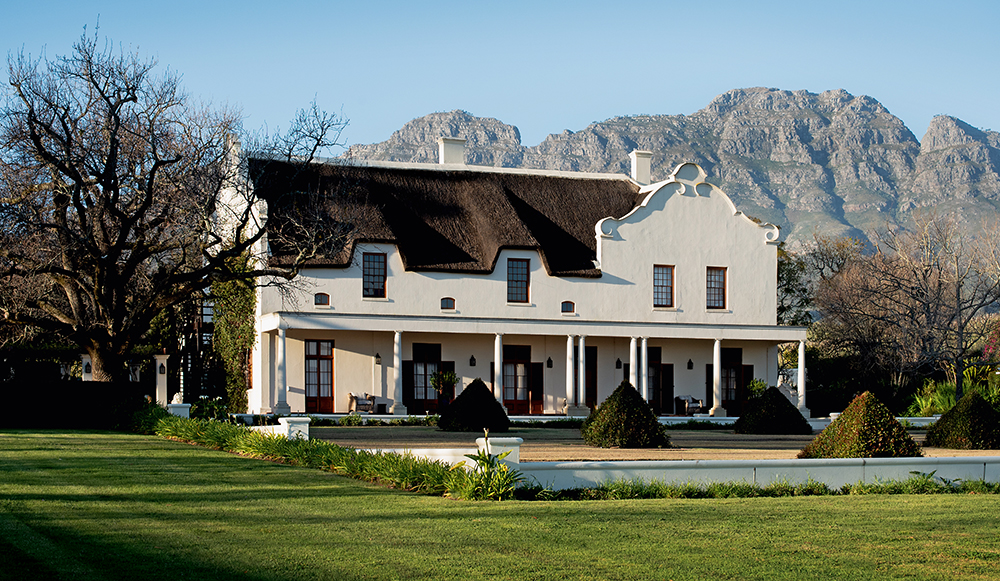 The core of Glenelly Estate’s success, both as a relatively new producer and as a business in a challenging pandemic era, lies in the power of heritage. It’s a legacy founded and tirelessly developed over the decades, originally in France, by owner Madame May de Lencquesaing. The estate’s approach is strategically global, yet with an inherently personal DNA. From her days as the owner of famous Château Pichon Longueville Comtesse de Lalande to becoming the proprietor of Glenelly, Madame is no stranger to the winemaking tradition.

Embarking on her South African wine adventure in 2003, she brought grandson Nicolas Bureau into the business after his time working with a famous London wine merchant and a Grande Marque Champagne. However, his experience of the country started in 1998, when Madame took seven of her grandchildren on a quintessential Southern African tour. “We started off in the bush visiting the Sabi Sands area, then Victoria Falls and next we spent a week in the Cape Winelands and Cape Town,” says Nicolas. “We all fell in love with the country and had no idea that six years later our grandmother would purchase a farm in Stellenbosch.”

Fast forward to 2011 and, based in London, he started handling exports for the estate. At the close of 2019, Nicolas, together with his wife, Philippine, and their children, moved permanently to Stellenbosch to run Glenelly.

It is not just the ownership of an illustrious château that gives Madame and grandson Nicolas their wine stripes. Vintners since 1783, the family’s wine legacy is extensive. “The history of my maternal grandmother’s family is strongly interconnected with its production, very localised geographically in the left bank region of Bordeaux, known as the Medoc,” explains Nicolas.

“They produced wines in a fairly small area, between Margaux in the South and Pauillac in the North. When you think how expansive the Bordeaux area is, this is just a tiny part of it. Over the past two centuries, châteaux like Siran, Marquis de Terme, Malescot St Exupéry, Ducru-Beaucaillou, Palmer and others have been owned or partly owned by the family. More recently, my father was running a vineyard in the Loire Valley and making very interesting Chenins.” For Nicolas, the sentiment that his family’s destiny has been linked to the ancient and hardy vine plant is both grounding and exciting. That it’s ultimately led him and his family to live in South Africa is a happy narrative. Interestingly, Philippine’s family history is also rooted in viticulture, both in Champagne and Cognac.

While familiar territory for Nicolas, moving countries was daunting. Settling in Stellenbosch two years ago came with challenges, however, it’s proved a real blessing for the Bureau family. “The move has been quite a radical change in lifestyle for us,” explains Nicolas. “Previously we had lived in the UK for many years, travelling extensively. We landed in Stellenbosch between Christmas and New Year 2019 and as well as it being a new environment for us as a family, we were just starting to hear about a virus spreading in China. What was to follow we all know about and I think it’s had a serious impact on everyone’s lives worldwide. I believe we have been fortunate to live on a farm during this pandemic, as we were able to enjoy the outdoors and have the privilege of space – a lot more than if we’d stayed in our flat in London.”

The discovery of the diversity of landscapes and things to do and see within a relatively short distance of Stellenbosch has been of huge benefit, he adds. From the ocean at Hermanus to the Cape Peninsula and the West Coast to the beautiful Garden Route, there’s much surrounding the Winelands to explore. “Coming from an urban setting, we are really seeing the difference between a polluted air environment to the much cleaner one in Stellenbosch,” says Nicolas. “The children have hardly been ill in two years and we attribute much of it to clean outdoor living.”

Both Nicolas and Philippine feel living in Stellenbosch is a dream for children. “There are so many activities, sports and kid-friendly things to do in general, I can’t think of a better place for children to grow up,” says Nicolas. “We are careful about screen time, ensuring it’s kept to a minimum, and instead focus on plenty of outside play. Sticks and rocks mean imaginations can run wild. Recently our girls have become proficient at building fairy gardens in the hope of getting sweets when they’re not being watched,” he laughs. Also, this area has really charming outings for weekends, he adds. “Some of their favourites include the Winelands Light Railway for small steam-powered locomotives or Acrobranch at Joostenberg.”

As the weather becomes irresistibly sunny, Nicolas, a self-confessed foodie, loves the long summer evenings that run late into the night. You’ll find him at the estate’s Vine Bistro, which is independently run by chef patron Christophe Dehosse. “Where else in the Western Cape can you eat French repertoire staples like cassoulet, sweetbreads,
onion soup or even bouillabaisse?” he muses. He loves meeting the farm’s guests, from those visiting the tasting room to those enjoying the rich history housed in the estate’s significant Glass Museum. “I’m so proud of my grandmother’s passion for collecting glass and subsequently our one-of-a-kind local and international collection,” Nicolas says. Glenelly really is a place to savour what’s on offer, take in the views and relish the warm hospitality, he adds.

Stefan’s: the art of cuisine