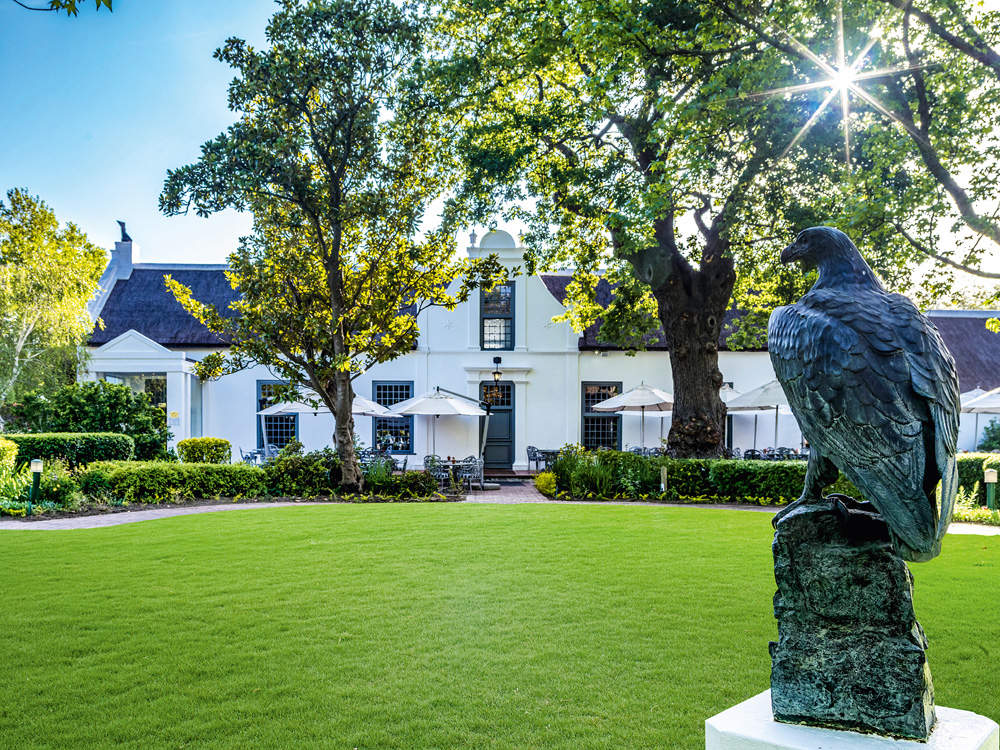 Boasting a fascinating history spanning three centuries, the Erinvale Hotel & Spa certainly meets the criteria
demanded by Historic Hotels Worldwide, an official programme of the National Trust for Historic Preservation (in the USA) that represents the finest global collection of historic hotels in more than 30 countries. The trust’s focus is to promote cultural travel to prominent historical treasures.

In the first place, Erinvale is as historic as they come in South Africa, having been acquired by Willem Adriaan van der Stel, the new governor of the Cape, in 1700 as part of the farm he called Vergelegen. When the farm was sold after Willem Adriaan’s recall to Holland, it was divided into several portions, one of which is now called Erinvale. The property passed through the hands of many old Cape families – Theunis­sens, Munniks and Morkels, to name a few – and it was Helena Munnik who apparently endowed it with a homestead in 1817. Half a century later, the farm was bought by an Irishman, Edward Strangman, who named it Erin Vale (Irish Valley) in memory of his native country. The homestead was demolished by Edward’s granddaughters after a fire in 1951, but they rebuilt the current manor house on part of its foundations. Established in 1994, the Erinvale Estate Hotel today preserves this unique heritage with pride and care. Its thatched L-shaped rooms were constructed within the footprint of the old stables, the large conference centre was the original pigsty and the smaller conference centre used to be the old tractor shed.

Nowhere is the hotel’s pride in its legacy more apparent than in the name of its flagship restaurant: Seventeen07, the year in which the property that would become Erinvale was ‘liberated’ from Vergelegen following Governor Willem Adriaan van der Stel’s ignominious return to Amsterdam.

The restaurant’s table d’hôte menu, prepared by executive chef Stefan Bekker and his dedicated team, offers wholesome, quality seasonal fare complemented by award-winning wines from the Cape Winelands. The fresh produce from the surrounding farmlands provides an ever-changing source of inspiration for Stefan, resulting in original dishes that are uncomplicated but delicious.

Stefan hails from Malelane, a small farming town in Mpumalanga surrounded by rolling hills of sugar cane. His parents owned a couple of cafés, so this, he says, is where his food journey started. He got to know the kitchen environment from an early age and at seven years old, so the story goes, he accidentally burnt himself on a stove for the first time. It’s a habit that’s repeated to this day …

As a young man Stefan didn’t make a conscious decision to become a chef but simply followed the path that seemed to be before him. He believes creating dishes for a living is a calling, a lifestyle rather than a job, and that dreaming up new recipes and ideas to please diners should always be on a chef’s mind. Having started out as a sculler in England at the age of 18, he went on to work in kitchens there and in Doha and Thailand, as well as on cruise ships. He made it his mission to explore this multi-faceted industry thoroughly and there’s little he hasn’t done; he’s cooked in fine-dining establishments and for royalty, presi­dents and heads of state, and he’s mastered mass catering, too.

Appointed to his first executive position in a four-star hotel at the age of 23, Stefan worked his way through the ranks, from bottom to top, at record speed. And now he’s found a home at Erinvale Estate Hotel & Spa, where his passion for creating delicious yet simple food continues to grow. His cuisine can be described as modern, with the comfort of old-world flavours – food we all know and love. The menu changes regularly to make the most of what is in season and to ensure only the freshest produce is selected. This principle constantly challenges Stefan and his team to be imaginative and adaptable at all times. Designing and creating new dishes is a co-operative effort, with all members bringing their ideas, quite literally, to the table. The connection between the imagination and the plate is what they are all striving for every day at Seventeen07.

The philosophy of this flagship restaurant is that food should be an experience, not just a meal. Its table d’hôte menu of two, three or seven courses is accompanied by wine pairings from only one wine estate at a time. It presents exciting new flavour combinations as well as more traditional ones, all inspired by seasonal and fresh ingredients.

With seating for no more than 20 guests, Seventeen07 ensures that dining there is an intimate as well as a culinary experience – and coupled with the magnificent backdrop of the Hottentots Holland Mountains, it is an experience that will long be remembered.

Back to the future