Consistency. It’s a word Danie Malan uses often as we sit chatting on the shady porch of the family homestead on Allesverloren estate. Behind us, the farm’s vineyards scramble up the slopes of the Kasteelberg, while below our feet the stoep gives way to manicured lawns, ancient oak trees and a rose garden in full bloom. Beyond the whitewashed farm walls more vineyards roll out in patchwork across the Swartland, the vines lush beneath the warm sun of summer. 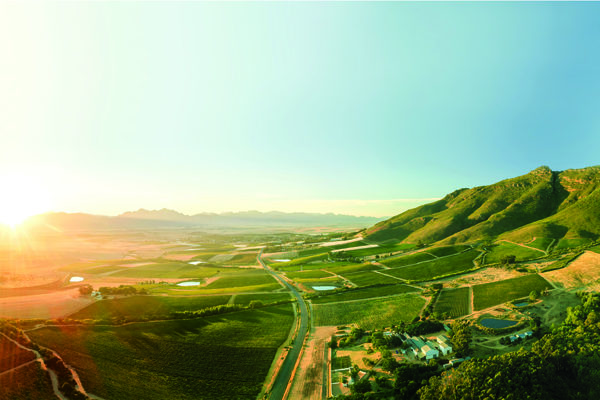 “The biggest secret of Allesverloren is the consistency in quality through the decades,” says Danie. “That was a lesson forced into my head by my father, who said that consistency, in the end, will be your success.”

Danie is the fifth generation of his family to farm Allesverloren, the oldest estate in the Swartland and one of the icons of the South African Winelands. The farm owes its name to a tragic story from the past. When the widow who first settled the farm returned one day from a trip to Stellenbosch, she found the farmhouse burnt to the ground and the farm destroyed. “Alles verloren!” (All is lost!) she is said to have cried, and the farm’s name was burnt into the annals of history.

While the farm’s history may be tinged with tragedy, over the past 140 years the Malan family has enjoyed remarkable success on the 227ha property. And part of that ongoing success is due to the farm’s unique Swartland location, where warm summers contribute a richness and fruit-forward boldness that has proven a hit with generations of South African wine lovers.

But it’s not only the warm ripening that comes into play. Along with receiving higher rainfall than many Swartland estates, the farm’s mountain topography has given it a remarkable variation in terroir.

“Our highest vineyards are 300m above sea level and the lowest just 150m,” explains Wilhelm de Vries, who joined Allesverloren as winemaker in 2016. “That’s quite a drop in altitude and it gives us a real spread of flavours coming through in the wine. We have Cabernet Sauvignon planted all the way from the top of the farm to the lowest vineyards, so we have different characters to work with in the final blend.”

“That’s part and parcel of the farm; a gift from above!” chuckles Danie, adding that blending a cross-section of fruit from different vineyards “gives you a better wine, a more complex wine. For us the goal is to create wines that are typical of Allesverloren and typical of the Swartland. I don’t want my Swartland Shiraz to taste the same as a Stellenbosch Shiraz or a Robertson Shiraz.”

While being hailed as stalwarts of the Winelands, the winemakers of Allesverloren have long been pioneers, often taking a revolutionary approach to both winemaking and viticulture. “In the late 1980s, we did a lot of things differently out here in the Swartland,” says Danie. “We weren’t as clinical in our winemaking, we experimented with different fermentations and focused on the drinkability of the wine.”

The Malan family were also pioneers in introducing Portuguese varieties into local vineyards. Danie’s grandfather brought the first Portuguese cultivars into South Africa, initially in a bid to improve the country’s fortified wines. “Before they brought back those cuttings, Port-style wine was made mostly from Shiraz and white versions from Chenin Blanc,” explains Danie. “Out of the 17 cultivars they brought back, 13 showed promise and 11 remain in the ground.”

Today Allesverloren is famous worldwide for the quality of its Port-style wine, the Fine Old Vintage being a perfect expression of the power and complexity derived from working with classic cultivars. Crafted from Tinta Barocca, Souzão, Pontac and a blend of Malvasia Rey, Tinta Röritz, Tinta Francisca and Touriga Naçional, it has a richness of black and red berries coupled with spice, smoke and sweetness.

While the Fine Old Vintage has fans worldwide, Danie and Wilhelm are also passionate about raising the profile of still wines made from these classic Portuguese cultivars. The public perception is often that still wines of Portuguese varieties will be overly robust and full-bodied. “But it’s completely the opposite!” says Danie. “Our single varietal Tinta Barocca is delicate, soft and feminine. It’s a very European style of wine. It’s only when it’s blended with other Portuguese cultivars that you have that robustness of Port.”

That makes the balancing act of the Três Vermelhos – ‘three reds’ – all the more impressive. The flagship red blend of Allesverloren combines Souzão, Tinta Barocca and Touriga Naçional in a supremely elegant red wine: a nose of dark chocolate and spice, backed up by a rich palate of sweet red fruit. “With the Três Vermelhos you get a bit more of that spice and fruitiness that you’d expect with Port, but without the heat of the alcohol,” says Wilhelm.

And while the estate’s Shiraz, Cabernet Sauvignon and new Chenin Blanc fly off the shelves, it’s growing the stature of their unique Portuguese varietals that keeps Danie and Wilhelm busy. “Our biggest challenge is to keep growing the brand and to keep up with the promise of the brand. When I was alone it was difficult. Now, with Wilhelm looking after the cellar, it’s become a lot easier!” laughs Danie.

Never one to pull punches, he is also passionate about creating wines for the wine-loving public, not awards judges and wine critics. “The taste of the wine is what counts,” he says. “Nowadays some of the most highly acclaimed wines are simply not made for drinking. Sometimes I don’t want to drink wine with food and sometimes I want to drink three or four glasses. But some of these wines are  only made for the judges and awards. I prefer to make wine for simple enjoyment.”

“We focus on crafting consumer-driven wines,” adds Wilhelm. “It’s much easier to sell wines that the consumer actually wants to drink!”

“Winning awards is nice but it doesn’t always mean you sell your wine,” agrees Danie as we finish our coffee. “To me, the proof is in being able to sell your wine, to make sure the business is sustainable. In an ever more competitive market, that is the challenge for the future.”

Celebrating the beautiful science of less.

Stewards of the trails