What is that one precious thing, the object closest to your heart, which you would never leave behind when you move? Elsabé Brits asked a few well-known locals about their most treasured possessions. 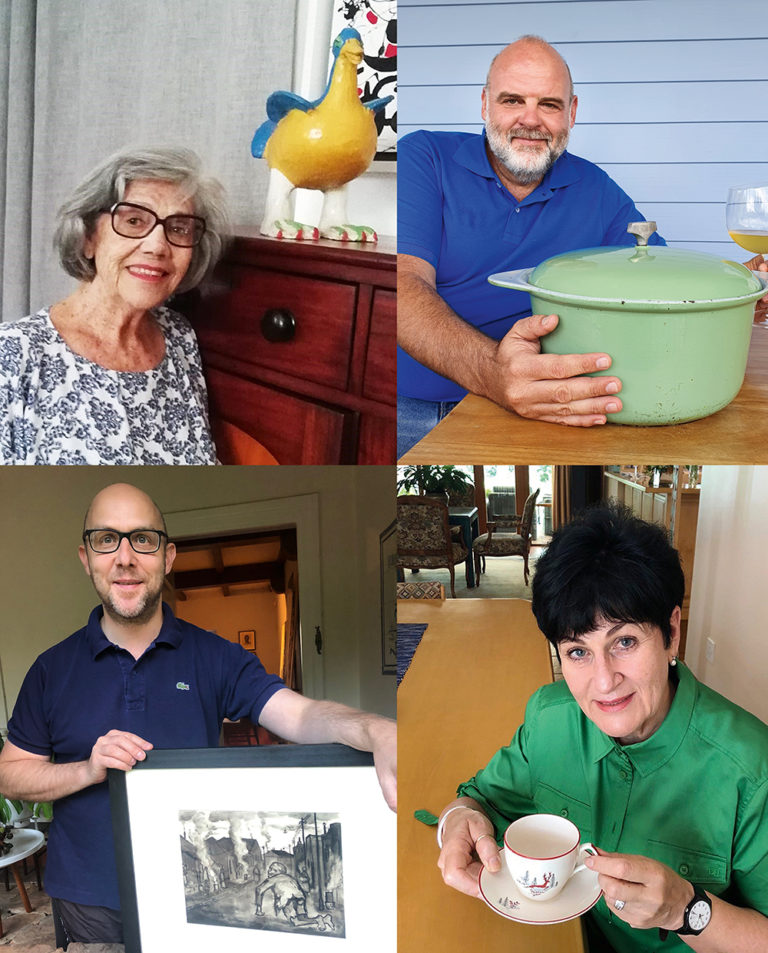 CLOCKWISE FROM TOP LEFT: Martie Retief-Meiring will take Nelson, the seagull that looks like a duck, with her wherever she moves. For Bertus van Niekerk it is grandma Het’s pot, in which he regularly cooks.  Karin Brynard with a cup and saucer that stirred her mother to tears.  Jean Meiring’s most favourite possession is this painting done in 1939 by Stellenbosch artist François Krige.

We all have something in our homes that we cherish above everything else, an irreplaceable item that no money can ever buy. An object with a special story. When you move, you always pack this item carefully to take with you.

In a time where we no longer keep photo albums, write letters or keep physical diaries, a souvenir like this is even more special – it embodies a history or inheritance which can make you laugh and cry. It is a treasure of the heart, a beloved memory. You may even have more than one such precious object.

One would never expect that such an object, which belonged to the Victorian scientist Charles Darwin, would be discovered in the year 2000. Unlike other fathers of his era, Darwin was a family man who spent much time with his children. He read to them, entertained them, and played with them.

His daughter Annie died at the age of ten, presumably of tuberculosis. Darwin and his wife, Emma, cherished a small wooden box that had belonged to Annie. It was filled with her childhood trinkets (a yellow hair bow, glass beads, other small items). It also contained personal notes describing how Annie died in his arms, and the terrible pain her death caused him. This little box of keepsakes was a precious memento, a secret that sustained Darwin and Emma.

What is your most precious item that will always travel with you, no matter how often and how far you have to move? We spoke to a few locals to find out about theirs.

Lawyer, writer and member of the board of  Stellenbosch University.

I have been collecting art since 2006, on and off. I started during my penniless years as a student in England, the best way there is.

One of my favourites is a very dark but striking work “Cripple, Johannesburg” by artist François Krige. This artwork dates from 1939 when the Second World War started.

Krige (also born and bred in Stellenbosch) is more associated with softer colours and atmospheres in his artwork. During his twenties, however, he tackled the social issues of the time with courage and respect, as in this ink and charcoal study of the poverty characteristic of big parts of Johannesburg. The tone and sensitivity in Krige’s work echo that of Käthe Kollwitz, and the honesty and directness are striking. This artwork hangs next to my front door, and when it comes to that, I will be able to snatch it quickly before rushing out of the house.

Nelson was born in Benoni in the late seventies. During those years the women’s movement Kontak campaigned for better race relations. They spread the message by also presenting children’s programmes. This organisation, an initiative by women who wanted to make a difference, still makes me proud.

A black teenager created this bird. He was inspired by clay as a medium and also by Des and Dawn Lindbergh’s song “The Seagull’s Name was Nelson”. The seagull in the song refers to Nelson Mandela, during those years a political prisoner on Robben Island. It was prohibited to portray him in any form, but there were ways of evading the strict censorship with “innocent” references to the anti-apartheid leaders.

The teenager who fashioned “Nelson” from clay did not know seagulls, the figure he came up with is closer to a duck. But this is Nelson.

I can’t remember what I paid for Nelson. But in the almost five times in my life that I moved house, I wrapped Nelson, together with other precious ceramic objects, carefully in towels and blankets, and packed them in boxes stuffed with newspapers.

There are some décor pieces in my home that I occasionally pack away to take out again later. But Nelson always stays in a prominent spot. The colours are vibrant and I never want to lose sight of him. I love children’s art, and I love Nelson in particular. He is roughly hewn. And he has a history.

At first glance there is nothing extraordinary about this old crockery set – but I remember the face of my mother when it was delivered to our home almost sixty years ago.

Her countenance lit up in wonder and awe with each box that was opened, each layer of tissue paper from which emerged a cup, a saucer, a plate, and a bowl. There were tears of pride and joy. Never before in her life had she owned anything as exquisite as this. This was a big moment, that much was clear to us – even to me as a child with no real understanding of life and of being.

Mom grew up with 11 other siblings in a family that was bitterly poor, even to the point of misery. Grandpa found it hard caring for the family. He suffered from depression and there were bouts of self-mutilation and attempted suicide. Life was often difficult and sombre. And hard.

But in her dreams, Mom was surrounded by roses and ribbons. She saw herself as a lady who owned lace and pearls and delicate porcelain. A cultured, educated and refined woman. She and Dad were also poor at times, but they worked non-stop in order to make ends meet.

And when things improved, Dad took her to Klein & Klein in Kimberley, where she could order something special for herself.

This crockery set came all the way from England, from Crown Devon Fieldings Porcelain Works, and sported the art deco Stockholm design: an elegant handpainted reindeer in a graceful leap. The set had 12 pieces of each item: from plates and bowls, right through to tiny espresso cups and saucers, pearly white with an eggshell finish. This set was only taken out on very, very special occasions like Christmas or when terribly important guests joined us for Sunday lunch. Mom trusted no-one with the handling or washing up of her treasures.

Mom is now almost 95 and barely remembers her own name. But I now treasure the Crown Devon Fieldings. And the ecstasy and wonder captured by each of those exuberant little reindeer. And the complete arc of a life.

Winemaker who uses grapes exclusively from the Stellenbosch area

I inherited a love for aromas from both my grandmothers. Grandmother Myda van Niekerk was actually named Maria Magdalena but her siblings’ pronunciation of her name stuck for life. I don’t quite know how grandma Het Fourie (Hester Jolina) got her nickname.

Both of them could cook up a storm, using the most basic of ingredients. Grandma Myda from the “Klipnamib”, the rocky Namib, was formidable: she slaughtered sheep and made her own boerewors. Grandma Het from Marikana, on the other hand, was a collector of the most delicate porcelain and cutlery. This pot once belonged to her. There are in fact two smaller ones as well.

A fond memory for me is of grandma spending entire Sundays in her kitchen, cooking for the whole family, and then putting the pot on the dining room table for everyone to help themselves. My mother still has many of the favourite recipes written down by grandma.

This green pot will always be the link between a happy childhood spent among loved ones of a bygone generation and my present life where I can express my passion for flavours and people. This pot speaks of all of that. I love to host wine tastings for groups of up to 25 people, and then I use this pot for my cooking.

LEFT: Nadine Petrick’s grandmother was a drama queen who smoked Stuyvesant and left this treasured ornament for her grandchild. RIGHT: Helena Gunter treasures an old tin that tells its own story.

Grandmother Phyllis was one of the greatest sports who walked this earth. She thought nothing, for instance, of skinny dipping with her granddaughters. She smoked Peter Stuyvesant Extra Mild and turned a blind eye when one of her grandsons nicked a cigarette (“sigrêtjie”) to smoke on the sly.

She was also a bit of a drama queen, with a magnificent sense of humour. For her younger guests, her kitchen cupboards were always stocked with goodies like NikNaks, Liquorice Allsorts and Oros. Great was my delight when she moved into our garden flat after grandpa passed away.

I used to play Rummy and Snap with her in the afternoons, I with my orange NikNak fingers, and she with a Stuyvesant in one hand. She was only 73 when she passed away in 1991. I was inconsolable – my best friend and best grandma was gone. I have never taken off the rings that I inherited from her.

There’s a small wooden box filled with trinkets as well as a small porcelain teapot that has a permanent place on my dressing table. Inside the teapot is an old till slip with the words written in pencil on the back “Auntie Bertha gave me this when I was 3 years old. Ouma”. Which means that the little teapot is almost a hundred years old.

The little teapot probably has no monetary value, but for an old sentimental fool like me, it still is a gateway to carefree afternoons of Allsorts and NikNaks and card games. And to my beloved grandma, Stuyvesant in hand.

The year 1963 was the year a miracle happened. A farmer from the district married a ballet teacher. My mom, with stars in her eyes, took a Weston cake tin from a pantry shelf. “Look,” she said to me, and pointed to the picture on the lid. “Would you not like to dance like this one day?” The prima ballerina in her tutu stands en pointe in front of a mirror in a dance hall from the Baroque era, in a world far from jersey cattle and grotesque injustices.

I knew nothing of en pointe or of any injustices but must have felt uncomfortable at that moment. Because all I said was no, that the ballerina reminded me of the stepmother in Snow White. My mom knew her child, and had said nothing further, but left the cake tin on my dressing table.

It is still standing on my dressing table, somewhat tatty and rusted in places. Although nothing came of my mother’s dream of a prima ballerina assoluta, I could never throw away that cake tin. Each time I look at that picture on the lid, I feel grateful for my mother’s perseverance.

Years and years of hard work at the alignment of head and shoulders and hips, all the port de bras, the ballon petit and grand allegros must have become imprinted on the psyche and the neuropathways. How else would any clean and elegant curve (whether on a building, in a text, melody, dance, statue or painting) still take my breath away and give my spirit wings.