The Curator’s Exhibition for the inaugural edition of the Stellenbosch Triennale reads like a who’s who of contemporary African art. Chief Curator Khanyisile Mbongwa along with curators Bernard Akoi-Jackson and Nontobeko Ntombela, draws from the Triennale’s overarching theme Tomorrow There will Be More of Us.  The exhibition will present contemporary African art in a critical dialogue with the society that fosters and exhibits it. 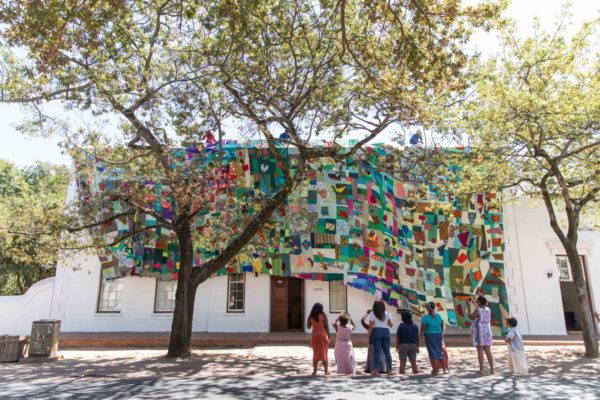 The participating Triennale artists enjoy an international standing with their works found in museums, biennials, and are important private collections around the globe.

The curator’s exhibition is housed in The Woodmill and on the surrounding precinct and provides a gateway to the other platforms of the Triennale. 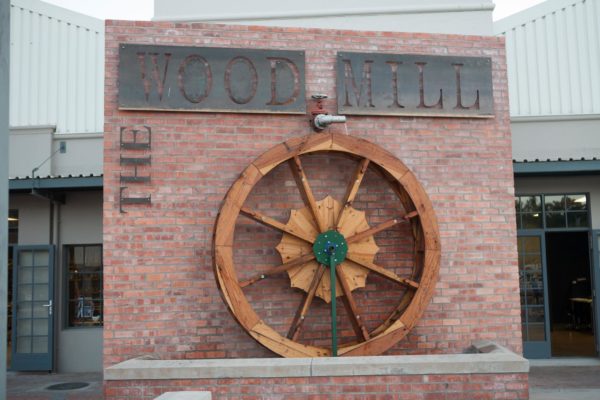 Bronwyn Katz, born in South Africa, practice incorporates sculpture, installation, video and performance with the concept of land as a repository of memory, reflecting on the notion of place or space as lived experience, and the ability of the land to remember and communicate the memory of its occupation. Using found materials, Katz’s approach to making is driven foremost by formal concerns such as composition and line, expressed in an abstract minimalist language. Katz is a founding member of iQhiya, an 11-women artist collective which has performed across various spaces, including Documenta.

Donna Kukama is an interdisciplinary South African artist whose work in real spaces is informed by a performance-based research process. Through performance, video, sound, texts, and non-monuments, her work questions how histories are narrated, as well as how value systems are constructed, often resisting established “ways of doing”. use performance to make visible the movements, tensions and emotions of contemporary society. Kukama’s own country is her main arena, although she also works elsewhere in the African continent and Europe. 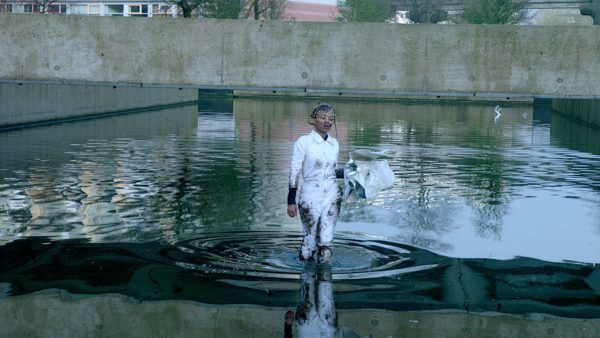 Euridice Kala, aka Zaituna, is a Mozambican artist and independent curator currently based in Paris. She was trained as a photographer at the Market Photo Workshop, Johannesburg (2012). Her interests in history take her to spaces of metamorphoses, mythology, cultural manipulations i.e. culture as power. She works with various mediums to achieve the finality of her ideas, from performance, video, sculptural-lyrics, installations and photography. 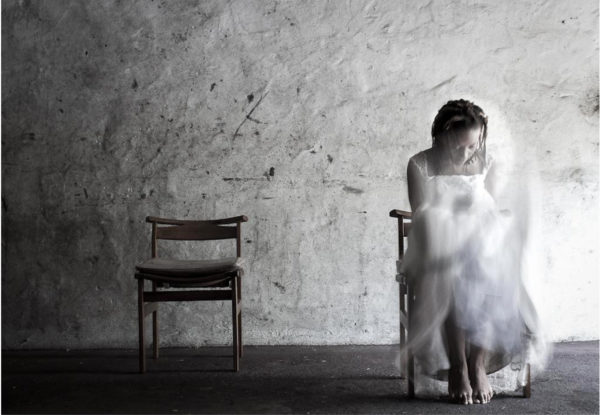 Hellen Nabukenya, born in Uganda, is a multifaceted visual artist whose work is inspired by the fashion world. She was awarded a degree in textile decoration and styling from Kyambogo University. She was a co-founder of l’ArtPunch Studio, an exhibition space and creative centre. Nabukenya explores the frontier between art and artisanal crafts. Her monumental interactive installations and colourful patchwork piece, made from textiles and recycled objects engage with economic or social topics such as the vulnerability of female identity. 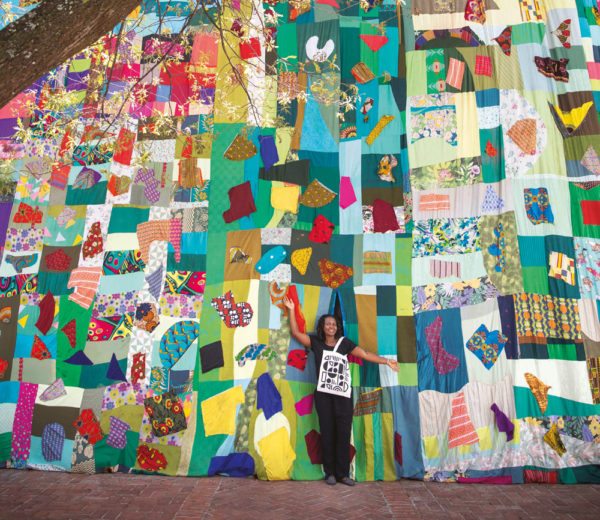 Ibrahim Mahama of Ghana uses the transformation of materials to explore themes of commodity, migration, globalisation and economic exchange. Often made in collaboration, his large-scale installations employ materials gathered from urban environments such as remnants of wood and textiles or jute sacks, which are sewn together and draped over architectural structures. His installation was included in the 2015 Venice Biennale. 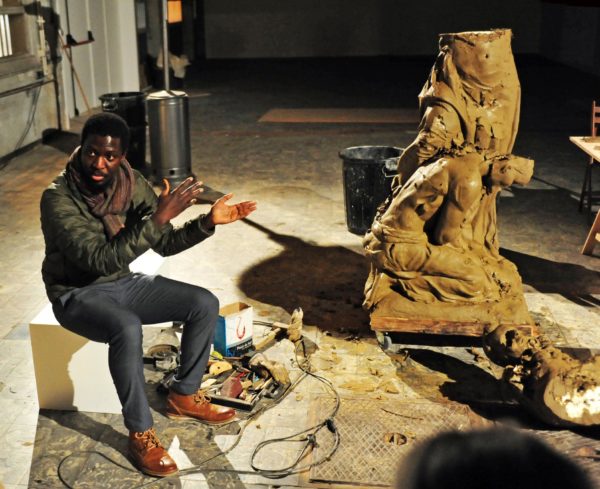 Igshaan Adams, South African, combines aspects of performance, weaving, sculpture and installation that draw upon his upbringing, his cross-disciplinary practise is an ongoing investigation into hybrid identity, particularly about race and sexuality. Raised by Christian grandparents in a community racially classified as ‘coloured’ under apartheid legislature, he is an observant but liberal Muslim who occupies a precarious place in his religious community because of his homosexuality. 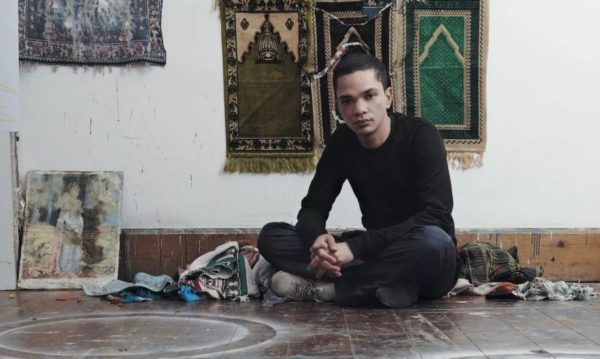 Kaloki Nyamai, Kenyan-born, explores the parallels between the past and the present through richly-layered, multimedia works. Drawing heavily on the stories of the Kamba community narrated to him by his grandmother, Nyamai explores how history and identity are intertwined and how this has informed the identities of people living in present, post-colonial Kenya. 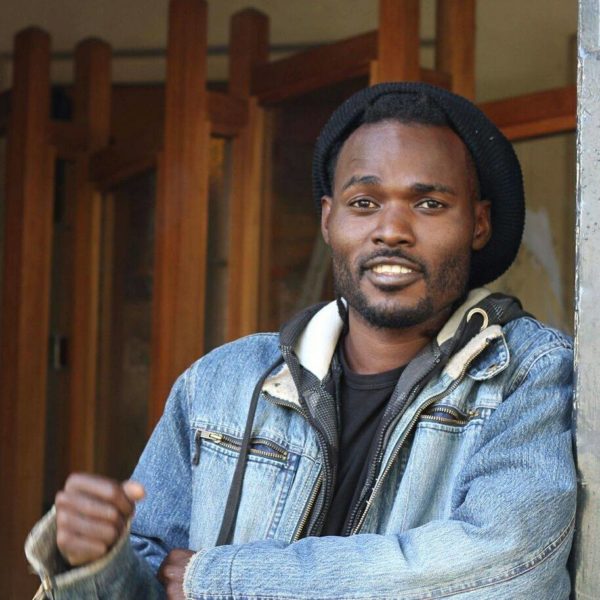 Kelvin Haizel from Accra, Ghana, is interested in the contemporary state of the image and expresses his ideas through video, photography and installations. In 2018 his work was shown at the 11th Rencontres de Bamako, Biennale Africaine de la Photographie. At the Lagos Biennale in 2017 Haizel was a guest curator. 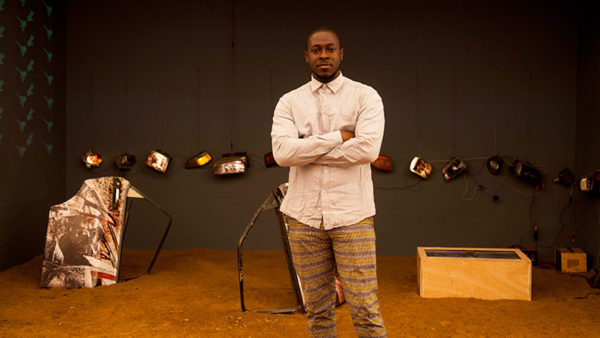 Kivu Ruhorahoza is a Rwandese film director, writer and producer. He is internationally known for his feature film Grey Matter which won the Jury Special Mention for Best Emerging Filmmaker at the

Mongezi Ncaphayi is a South African painter whose works employ rich, dynamic, spreading expanses of light, colour, and marked planes on paper crafting cartography of pictorial maps. Ncaphayi obtained a Certificate in Advanced Studies from School of the Museum of Fine Arts in Boston, USA, and in 2013 was the recipient of the prestigious Absa L’atelier Gerard Sekoto Award, earning him a three-month residency at the Cite Des Arts in Paris. In 2011, Ncaphayi received the Ampersand Foundation Fellowship in New York City, and in 2016, he was awarded the Prince Claus Fund Grant in Amsterdam. 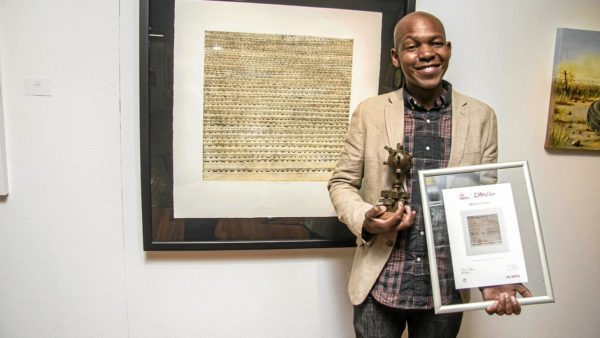 Nástio Mosquito, born in Angola, is a multimedia and performance artist who uses music, videos, spoken word poetry and a cappella. Combining a range of disparate tropes, such as post-internet, performance, protest and masquerade, Mosquito questions identity, political power and the concept of home. 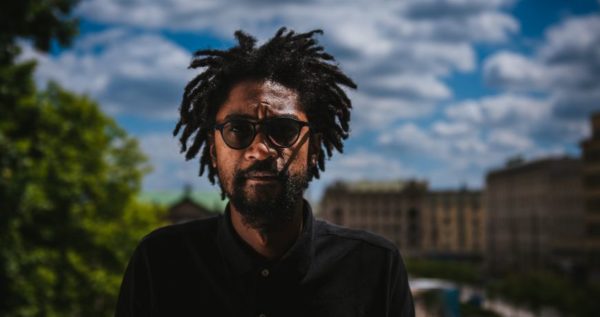 Patrick Bongoy, Congolese, works primarily in recycled rubber and hessian. His latest body of work is a response to the global reality of literal and figurative environmental pollution. This encompasses the entire spectrum from the erosion of economic viability, the impact on a community and individual behaviour and socio-cultural decay of the rural and urban landscape. Bongoy’s work is a subtle yet complex reflection and contemplation of the unbalanced status quo of the DRC where the constant power struggle between a militant government and a suppressed people is the sad reality. 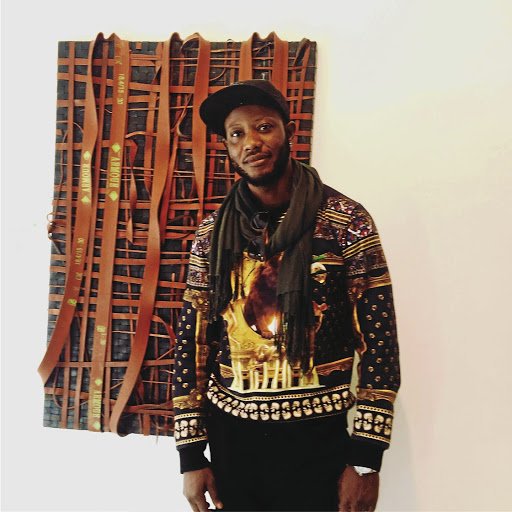 Reshma Chhiba is a South African visual artist and performer engaging in issues of contemporary and historical femininities. She uses the iconography of the Hindu Goddess Kali and the symbol of the yoni as a means of interrogating notions around sexuality, agency and gender. She holds a MAFA from the University of the Witwatersrand, and a diploma in Bharatanatyam from the Institute of Indian Art and Culture (South Africa). She currently serves as Exhibitions Coordinator at The Point of Order, an experimental exhibition space run by the Division of Visual Arts, Wits University. 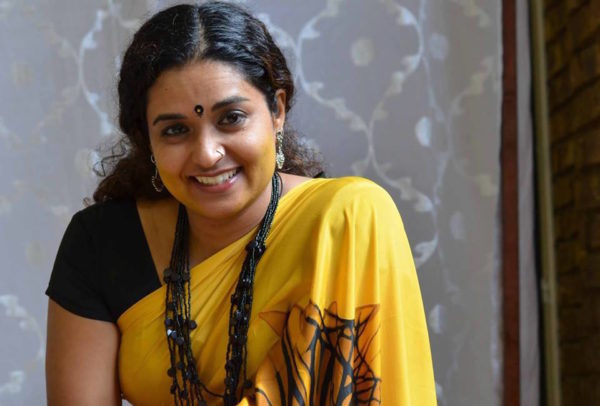 Ronald Muchatuta is a Zimbabwean-born contemporary artist residing in Cape Town. He specializes in drawing, painting and mosaics. His hybrid art is a dialogue on matters such as African migration and the turmoil and triumphs that stand after significant social and political events occur in Africa. His works also hold layers of his personal experiences, and his current body of work is inspired by the theme of African migration, which transpires into a global dialogue.

Sethembile Msezane, South African, was awarded a Masters in Fine Arts in 2017 from the Michaelis School of Fine Art. Using interdisciplinary practise encompassing performance, photography, film, sculpture and drawing, Msezane creates commanding works heavy with spiritual and political symbolism. The artist explores issues around spirituality, commemoration and African knowledge systems. She processes her dreams as a medium through a lens of the plurality of existence across space and time, asking questions about the remembrance of ancestry. 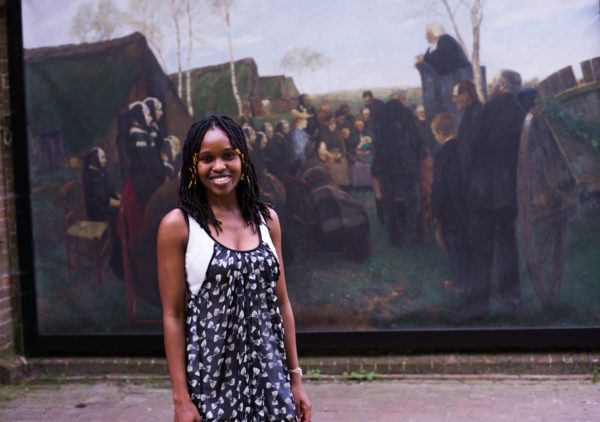 Stacey Gillian Abe is a Ugandan multidisciplinary artist whose work speaks of our insecurities, fears and expectations while in transition and moving through dimensions and spheres. She has incorporated a metaphorical and experimental approach to her work through her interest in exploring new techniques with parallel mediums like glass and ceramics, fibres, textures and light photography. 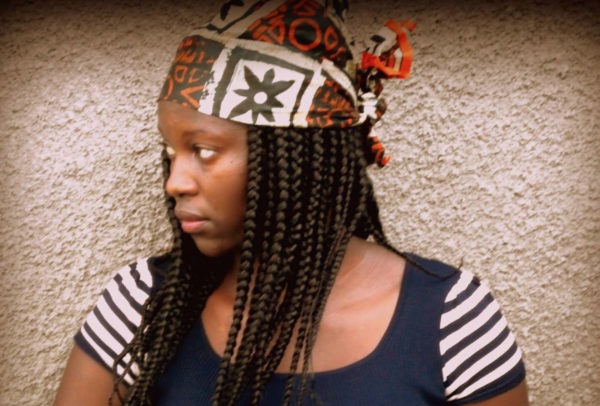 Tracy Naa Koshie Thompson is a Ghanaian artist whose practice involves an interest in material and industrial processes; as well as nature which inspires her— the aspects of complexity, the uncontrolled, and the mathematical ingenuity of nature which embodies its enigmatic beauty. 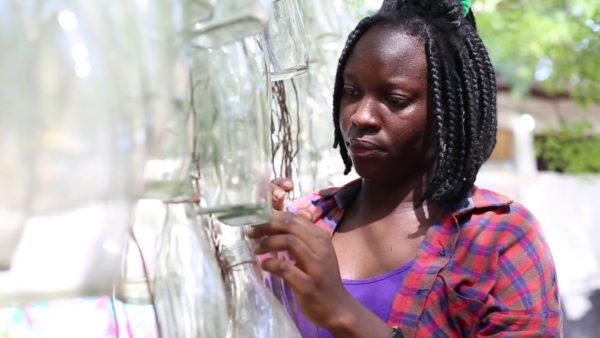 Victor Ehikhamenor, born in Nigeria, is a multi-faceted artist whose practise encompasses painting, drawing, photography, sculpture and installation, as well as unique perforated works on paper. Born in a small village in Edo State, the historic seat of the Benin Empire, he draws inspiration from the dual aesthetic and spiritual traditions which infused his upbringing, using imagery and symbolism from both Edo traditional religion and Catholicism. 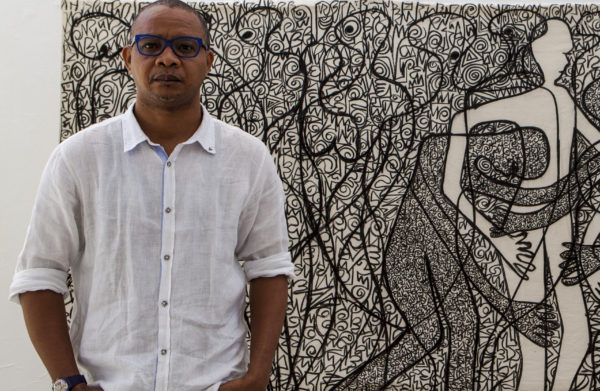 Wura-Natasha Ogunji is an American-born, Lagos based visual artist and performer. Her works include drawings, videos and public performances. Her work is deeply inspired by the daily interactions and frequencies that occur in the city of Lagos, Nigeria, from the epic to the intimate. Ogunji’s performances explore the presence of women in public space. 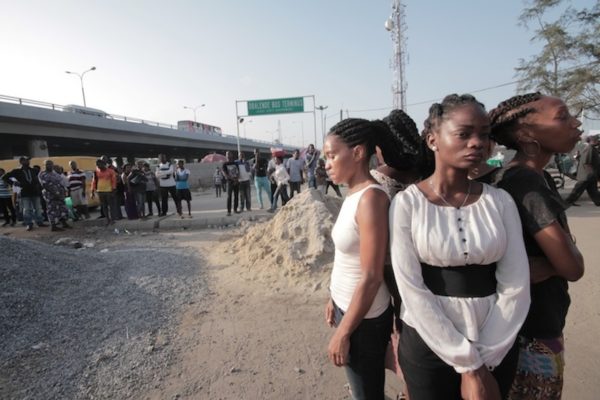 Zyma Amien is a South African artist based in Cape Town working in the field of conceptual art turning her lens on socio-political issues. In 2012, Amien won the Pretoria Cement competition for her work titled, The day they came for our house. In 2013, she was a finalist in the Sasol New Signatures and, in 2016, she won Sasol New Signatures. Currently, Zyma is a lecturer for UNISA. The Stellenbosch Triennale takes place from 11 February to 30 April 2020 and is free to the public. Click here to view the official programme and map for this years’ event.