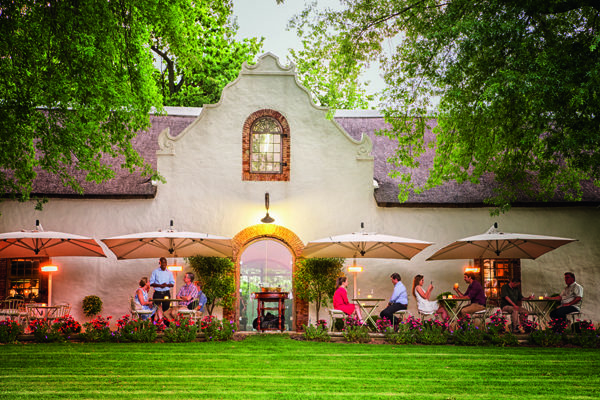 Guests at the restaurant can enjoy dining outside on a balmy evening. Photos: Greg Cox

Rust en Vrede has been an icon in the Stellenbosch Winelands for centuries. Founded in 1694 by governor of the Cape Willem Adriaan van der Stel, the estate produced wine intermittently until it was taken over by the Engelbrecht family in 1977. Since then, initially in the capable hands of South African rugby legend Jannie, it has concentrated on making red wines of the highest quality. 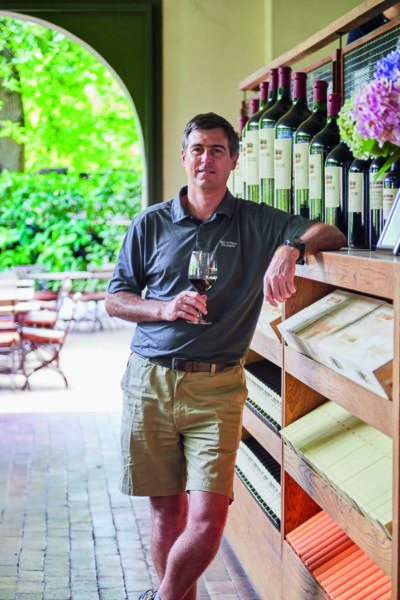 Winemaker Coenie Snyman is a member of the illustrious Cape Winemakers Guild. He’s committed to constantly improving processes on the estate.

Many accolades have been bestowed upon the estate and its produce. President Nelson Mandela selected Rust en Vrede wine to be served at the dinner that celebrated his winning of the Nobel Peace Prize; the estate hosted the queen of Denmark at a luncheon with the Engelbrecht family in the manor house; and the first South African red wine to be included in the Top 100 Wines of the World – as adjudged by the US publication Wine Spectator– came from Rust en Vrede. This last accolade was awarded for four consecutive years and has since been awarded twice more. In 2009, winemaker Coenie Snyman was named the Diners Club Winemaker of the Year and in the same year, the estate’s restaurant was designated one of the Top 100 Restaurants of the World. Just a year later, the restaurant won all three categories at the Annual Restaurant Awards ceremony: Best Service Award, Best Restaurant Award and Best Chef Award. And in 2010, Rust en Vrede was the recipient of the International Best of Wine Tourism Award in Bordeaux, France.

Jean Engelbrecht, who took over the management of the estate from his father, Jannie, in 1998, describes Rust en Vrede as being very special to him. “It’s where I grew up and still live today. The accolades we’ve received are not achieved by one person. I thank my parents and colleagues who have always been willing to go the extra mile, and our patrons without whom these remarkable feats and achievements would not have been possible. Today Rust en Vrede continues to be a fine example of what Stellenbosch is all about and we will strive to be a driving force in promoting our wines, our appellation and ultimately our country.”

When he took over, Jean made the decision to remain registered as an estate, which means that only grapes grown on the property are used in the production of its wines. “There is always a temptation to deregister as an estate, because when you have a strong brand name, you can easily double your production,” he says. “At Rust en Vrede we produce only 20 000 cases of wine per year, of which 50% is exported to more than 30 countries around the world. We have always focused on red varieties and specifically Cabernet Sauvignon, Shiraz and Merlot. In 2017 we grubbed up the Merlot and since 2018, we have been producing only Cabernet and Shiraz. Our feeling is we should stick to what we know and every year we learn something new about our vineyards. The main aim and challenge of this strategy is to ensure our continued style. In that way a visitor who has tasted our wines in the past can still recognise Rust en Vrede in every new vintage. 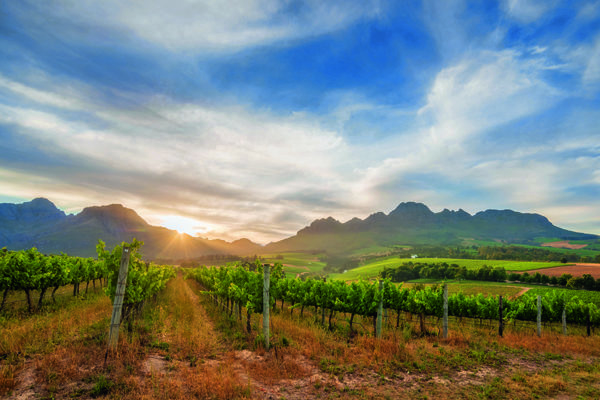 The estate’s location on the lower slopes of the Helderberg is not only picturesque, it also ensures the grapes receive ample sunshine while being shielded from the prevailing winds.

“We’ve learnt a lot over the past 10 to 15 years, especially in terms of vineyard management as viticulture has progressed exponentially during this period. We’ve focused particularly on improving canopy management and using organic fertilisers. When I was growing up, most wine producers from all the different regions were employing the same farming techniques, but that has changed. Now there are clear differences in the various regions because each one has its own climate and agricultural challenges. If we as producers do not adapt, it will ultimately show in our wines.”

Constant renewal is evident at Rust en Vrede in the form of an extensive replanting project and the use of new viticultural methods, such as wider spacing between the vines. “By making a small and simple adjustment to how we plant new vines, we are able to manage the vineyards and the vine growth much better,” explains Coenie. “This brings natural balance to the vineyard and makes canopy management easier, especially for Cabernet Sauvignon, where the focus is on ensuring the bunches ripen evenly. In addition, we don’t drive through the vineyards for the first two to three years and after that keep vehicle access to a minimum. Everything in the new vineyard is done on foot because we don’t want to compact the earth between the rows and stunt the root growth of the young vines. Thus the roots can penetrate deeper and require less water.” 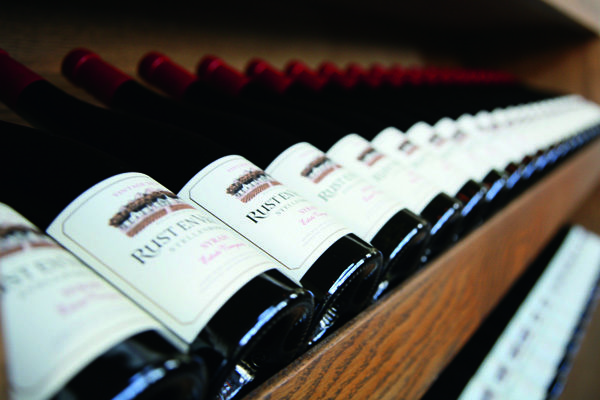 This fits in with Jean and Coenie’s views about global warming. Jean is philosophical when he says that weather patterns have changed. “In Stellenbosch we have had shorter winters for a number of years now and our summers are hotter. But that’s not unique to South Africa; wine producers all over the world are experiencing similar changes. On a global scale, we need to adjust our farming strategies. It’s a fact we all have to face: there will be less water in the future, but I believe that we’ll be able to cope. In South Africa all farmers will have to work together to manage the situation. There are still areas that use flood irrigation, but that shouldn’t be the case in the 21st century. There has to be a strategy to change our use of water resources and within a certain time-frame, such as a five-year plan to employ drip irrigation systems. And not only for wine producers, but for general agriculture as well. We need to use our water resources more effectively.”

“The recent water scare in the Western Cape actually showed wine producers that vineyards can manage with less water. The vines themselves adapted, and that mitigated the effects of the drought somewhat,” adds Coenie. “In fact, the vines seem to be coping with climate change better than humans. But it is the diversity of change that we need to learn how to manage. The more diverse the changes are, the better we have to interpret them. We have to learn how to live in different circumstances. When the water crisis hit, we fitted water monitors to every home on the estate as well as to the cellar and restaurant and each had a quota to stick to. Every Monday we had a feedback session to see where we needed to intervene. One of the successes of this strategy was that we picked up many underground leaks and were able to fix them. But the biggest advantage of a good site such as Rust en Vrede is that even in difficult times we can still produce quality wines; in 2018, we harvested one ton of grapes more than the previous vintage. Never underestimate the quality of your environment. In addition, as an estate we have a specific style that is determined by our vineyards. When you look at trends which come and go, it is only the traditional styles that offer consistent quality in the long term and reflect the different vintages accurately – and it is ultimately they that are most successful.” 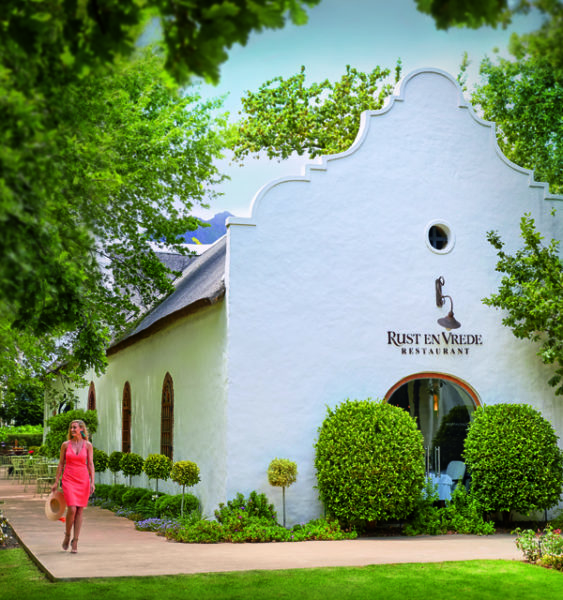 In planning for the future, the replanting programme is well under way. “As far as the facilities are concerned,” says Jean, “we are constantly upgrading the buildings and our offerings to visitors. We depend on tourists and want to make our estate attractive to them. As for Stellenbosch, it goes without saying that it is the most beautiful town in the world! We’re 25 minutes from the airport and 45 minutes from the centre of Cape Town; not many world-class wine destinations can boast that accessibility. And we should exploit that. When I grew up, Rust en Vrede was the only estate on this road that accepted visitors; today there are about 12. And each one offers something different. A visitor can spend the whole day here. I see that as a positive not only for us, but for the whole of Stellenbosch.”

When Jean relaxes he loves playing golf, hunting in the Kalahari and fishing off the coast of Namibia. “My mom is from Namibia and I love the people and have many friends there,” he explains. “I have businesses in Namibia and travel there quite often. Stellenbosch, Swakopmund and the Kalahari are my favourite places on Earth. In any one of them I can recharge my batteries and take the opportuni­ty to appreciate my environment. Once a year I do a 4×4 trip with friends to untouched areas in Namibia or Botswana and we always have a food and wine theme to the trip.”

And something we didn’t know about Jean? “I don’t like wearing long trousers!”

1978   With a vision to make only red wines, the Engelbrecht family produces the first Rust en Vrede vintage of the modern era

2010   Rust en Vrede is proclaimed the Global Winner at the Best of Wine Tourism Awards in Bordeaux, France

2011   The restaurant wins the Eat Out Awards for Best Restaurant, Best Service and South African Chef of the Year (David Higgs); it is rated no. 61 in the San Pellegrino Top 100 Restaurants in the World