In the family frame

Want a picture – or any other item you care about – framed? Then you need to go to Jamestown, says Carina Diedericks-Hugo, whose visit to ROXANNO’S was a lesson in family values. 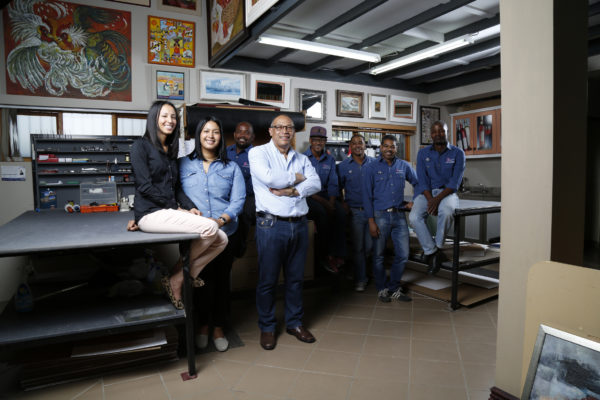 In the heart of Jamestown, one of Stellenbosch’s oldest neighbourhoods, lies one of the town’s success stories: Roxanno’s Picture framers. For 40 years, Angus Adonis and his family have transformed the ordinary, the exceptional, the sentimental, the whimsical, the unbelievable and the irreplaceable into works of art.

Angus grew up in Jamestown during a time – and it wasn’t so long ago – when water was still transported on horse-drawn carts in his valley. Not far away, other Stellenbosch residents were lounging in swimming pools and could draw baths and fill kettles simply by opening a tap. Many people would have resigned themselves to the fact that there was an ‘us’ and a ‘them’ and that the ‘them’ surged forward while the ‘us’ was kept in their wake. That might have been true for some, but definitely not for Angus.

It was his love for working with wood and his passion for art that drew him to the legendary Edrich in the heart of Stellenbosch in the 1970s. Dating back to 1946, Edrich was a photography studio, art gallery and picture framer to which clients travelled from all parts of the Western Cape to have their pictures and art framed. few knew that at the back of the shop was a very young man working with unprecedented precision and skill, talent and instinct.

“I was born with a level,” Angus says jokingly. “And I love change. That’s what art brings. Literally change in what you see, what you deal with. Change within yourself, how you experience things.”

Perhaps it was that ability to accept and embrace change, and a hefty dose of courage, that made Angus leave Edrich to set up his own business. He realised that the only avenue he wanted to pursue was one where he was in charge, where he determined the route his business and life would take. Ideally, he wanted to base himself in Jamestown, but that was not to be and, after an uphill battle with banks to obtain a loan, he set up shop in Tennantville in 1995. 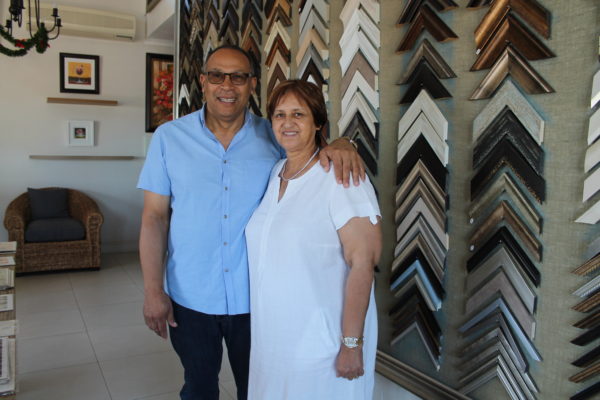 Angus had to start from scratch. His children, Roxanne and Chanel, were still young and he had to build up a new client base. Luckily his wife Audrey had a position as a teacher, but her income was hardly enough to cover living expenses, the costs of a new business and honouring a bank loan. “It can’t be done,” the people from Tennantville said. “Stellenbosch folk aren’t going to bring their business here, to you.” But they did.

After nine years in Tennantville, Angus’s landlord decided to sell the building, leaving the picture framer with a dilemma. Where to from here? The feisty young Chanel, then a pupil at Laerskool Eikestad, said to her father, “In 10 years’ time we must be back in Jamestown. The business must be in Jamestown.”

The Adonises took the plunge and, in 2005, moved the family business to Jamestown. But, even though it was an institution, the company was greeted with vehement resistance. The people of Jamestown didn’t want a commercial enterprise opening in a residential area. 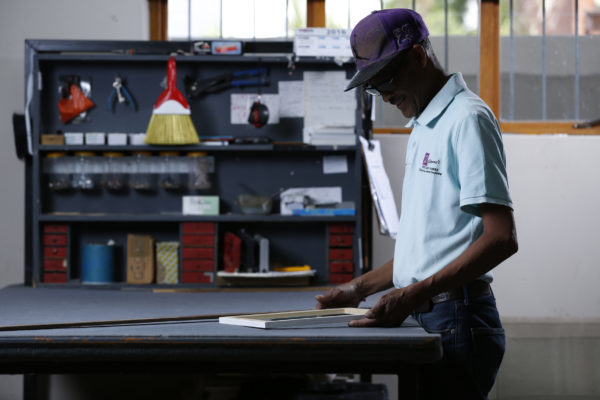 “The neighbours complained a lot – more than we expected,” says Angus. “The couple across the road from us had bought their property as their retirement house and they were worried that we were going to spoil the view with our double-storey building and that we’d be too noisy.”

Roxanne, the elder of the two Adonis daughters, interrupts him. “Tell about their sales pitch!” Angus chuckles. “Well, when they eventually put their house on the market, their biggest claim to fame and the selling point they offered was that it is opposite the famous Roxanno’s!”

Eleven years later, Roxanno’s has pushed the competition aside. Its recipe for success? The formidable Audrey, a well-known community leader, explains. “Passion first and foremost. We love what we do,” she says. “And definitely quality, but also customer service.”

“We don’t do business with an eye on the clock. We go according to the needs of our customers.” Angus pauses a moment and then expands. “It doesn’t matter if you are hungry or thirsty or tired. You make time. Quality time. You can always eat or sleep later.” 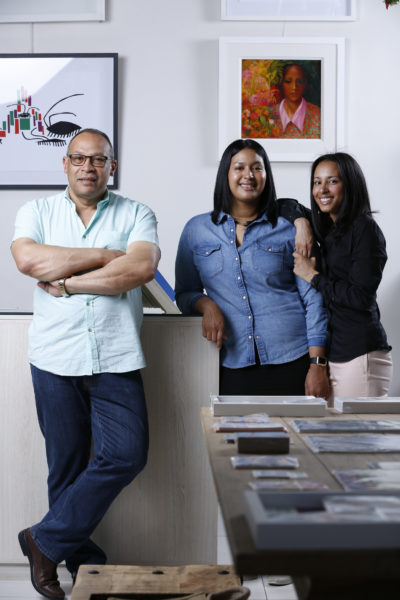 The business has grown into a family concern where everyone has a distinct role that complements the others. When you speak to regulars, one of the first things they mention is the incredible expertise and service from Roxanne and Chanel.

According to Angus, the name ‘Roxanno’s’ always needs a bit of explanation. Why name the framers after one daughter when you have two? “When I was starting up the business,” he says, “I had to give the accountant a couple of ideas for names. He was the one who actually chose Roxanno’s.”

Since then, a second leg of the business, Art at Chanel, has been launched, finally giving Chanel her own brand. Art at Chanel focuses on bespoke greeting cards and other artistic reproductions.

“The girls are very different, but have always been very close. When they were little, we bought Roxanne a bicycle and Chanel a tricycle,” recalls Angus. “The next minute I see Roxanne racing down the street, pulling Chanel and her bike and Chanel is sitting casually with her feet on the handlebars.”

Chanel holds a BComm Honours degree in Industrial Psychology and Roxanne studied at the famed Elizabeth Galloway Fashion Design School. The family business suits them perfectly. Chanel is thriving at the back end, using her financial acumen to handle that side of Roxanno’s. Roxanne deals with the clients and is the creative decision maker.

“Everyone has a place in the business,” says Chanel. “I handle the finances, Roxanne is the creative one and Angus is the plan maker.”

“Angus always has a plan!” laughs her sister. “But yes, we form a pyramid. Unique yet connected.” “And my mom keeps us all sane!” Chanel is quick to add.

Apart from her work in the community, Audrey keeps busy tending the lush garden, which runs from the company’s premises to their home. The garden has become almost as famous the business. “We have a love for beautiful things. All things beautiful,” muses Roxanne. “When you are creative, you will see beauty in everything.”

That philosophy can be traced directly to Angus. Apart from setting up Roxanno’s, he has a keen eye for art and has been a collector for more than 30 years. “I bought my first two watercolours in 1984 for R80 each. I was still young, but already I believed that a picture or painting is much more than just the perfect frame. A few years later, in 1989, I had to pay to connect our water and sold them for R700.”

What makes Roxanno’s unique is actually twofold. On the one hand you have the Adonis family, which works as a very strong unit and knows exactly what it can offer and how to do it well. And on the other hand just that: being the best in the business. There is nothing that they can’t frame or preserve.

“We have had everything come our way,” says Angus. “Roof tiles, personal effects, christening dresses, motor-racing suits, mounted fish – even a clutch plate!” “And, of course, paintings and pictures!” pipes up Chanel and laughs. “We get everything from a Pierneef to children’s art,” adds Roxanne. “And both get treated the same way. You can’t attach a monetary value to something of sentimental value,” says Audrey.

Do they get difficult people at times? Roxanne shakes her head. “No, not really. If you can explain to someone why a certain frame or idea can’t work and you do it well, then you seldom experience problems. A big part of our business is the trust people have in us. It is a massive responsibility.” 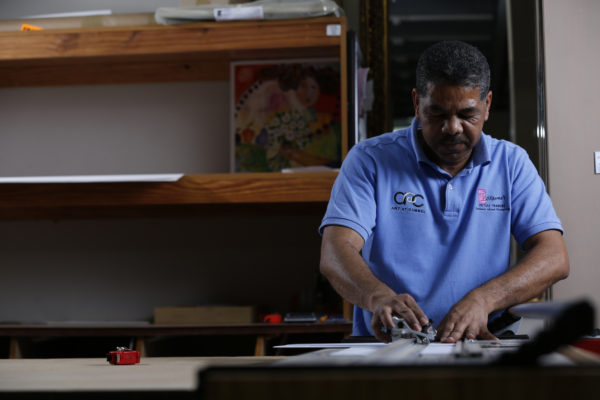 In a town and area rich in art and with a penchant for preservation, it seems fitting that the best in the business is nestled in the oldest suburb overlooking Stellenbosch Mountain. In time, Angus will hand the business over to the talented Roxanne and Chanel before relaxing with Audrey in their garden. But till that day, our precious pieces are safe in the hands of Angus Adonis. Or, as they say in Jamestown, “Don’t fear when Adon-is near.”