A taste of France 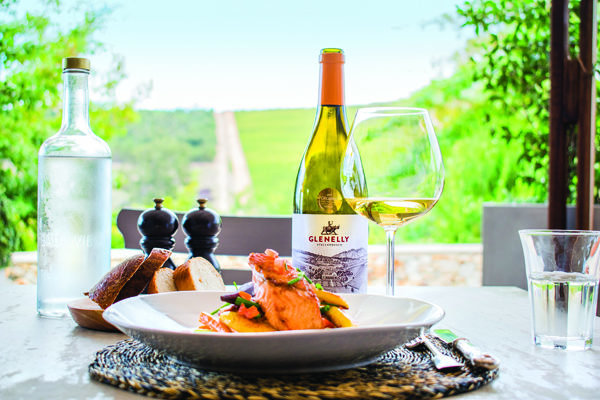 At The Vine Bistro elegant dishes complement the Glenelly wines.

Luck was on our side. We decided to dine at The Vine Bistro towards the end of the year, on the very last day of November. We had an evening of gastronomic pleasure and physical relaxation in mind – 2018 had taken its toll. We’d forgotten, though, that this was the cusp of the calendar, when Stellenbosch is drained of students and the corporate citizens are elsewhere, anticipating Yuletide.

Turning into the Glenelly Estate from Lelie Street in Idas Valley, we found ourselves in a world that should have been typical of Stellenbosch but wasn’t. Vineyards were growing where once fruit trees had been, and there was an orderliness that became more and more reassuring as we drove further into the estate.

It is well known that Madame May de Lencquesaing, owner of the prestigious Château Pichon Longueville Comtesse de Lalande, bought Glenelly in 2003. Originally part of the Idas Valley farm, which came into being in 1682 through a grant by Governor Simon van der Stel, Glenelly immediately benefited from May de Lencquesaing’s meticulous planning. She was 78 at the time but still had a grand new vision for the farm.

By replacing the existing fruit orchards with vineyards, the new owner not only sought to make the most of soil and climate, but also managed to create a vineyard with a distinct character. Under her guidance, Château Pichon Longueville Comtesse de Lalande had gained international renown; now, after she sold it in 2007, Glenelly would become her pride and joy.

And on her estate, The Vine Bistro has recently undergone more renovations that have made it into one of the most pleasant dining establishments in Stellenbosch. It is spread over two areas, making it adaptable to whatever weather the seasons deliver. Inside it has a French feel, with tables and chairs originating from the country where May de Lencquesaing’s family have been trendsetters for the past two centuries. 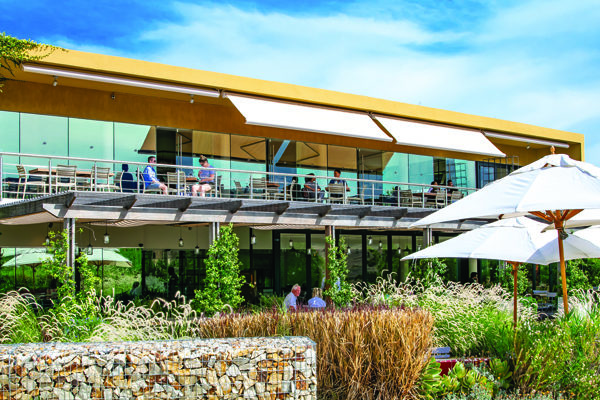 With vines creeping up the side of the building and plants all around, the restaurant and tasting room seem embedded in a rambling garden.

In winter a fireplace warms the restaurant, but on the evening we visited The Vine Bistro, the weather was glorious and summery. We dined where the terrace with its pergola meets the restaurant, creating the illusion that one is inside but also free and unencumbered outside. The tables are set quite far apart and, as there were few diners, we had the feeling of complete privacy. Talk flowed freely … Oh, for 30 November every day of the year!

It’s strange how circumstances contrive to make the enjoyment of food that much more pleasurable. We weren’t aware of any sounds coming from the kitchen but every now and again the waiter passed us with food destined for distant tables. The wondrous smells wafting in her wake created a rush of hunger and longing in our mouths. 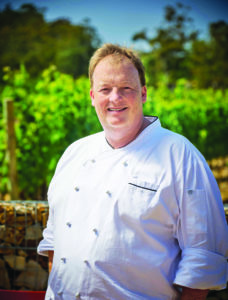 We ordered starters, determined not to let The Vine Bistro’s French pleasures evade us any longer. They proved to be seductive – subtle flavours, gentle fragrances – although my order was a little more robust. Now the waiter stopped at our table with oysters from Saldanha Bay (with mignonette and lemon), gravadlax of Franschhoek trout (with pickled vegetables and baby leaf salad), tuna ceviche (with lemon ginger pickled watermelon) and, for me, homemade bresaola with gremolata.

Everyone enthused about the wonderfully light way in which the evening repast began. My choice, however, involved raw beef that had been dry-cured and salted. I’m not complaining. I enjoyed the full-on experience, the in-for-a-penny-ness of my first steps to an evening of bliss. Bresaola’s roots may be Italian rather than French but it was still exceptional.

The main course was memorable, too, and in many ways. I am of the opinion that when your path crosses that of a truly gifted chef, it is perfectly in order to make the most of the occasion and to become a complete glutton. On such occasions there is nothing wrong with using a piece of bread to mop up the last heavenly sauces left from the steak that had blessed the plate with its presence. If anyone frowns upon such deeds, so be it. Life is too short.

But what if that steak is not on your plate, but in front of a companion on the other side of the table? Let me tell you, it was difficult. He had the Cape Wagyu flat iron steak with glazed baby onions, confit aubergine, mushroom duxelle and, of course, a red wine sauce. So I averted my attention, tried to ignore the seriously tempting smell of the beef and its sauce and concentrated on my grilled lamb chop with lamb roulade, butternut salsa and a bush bean and cucumber salad with chimichurri sauce. It did wonders to quieten my nerves and soothe my soul. But the steak still tickled at my nose. 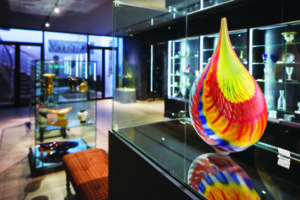 The other two companions settled for lighter fare: hake and bouillabaisse. The lightly cured hake was accompanied by vegetable jardinière, potato fondant and beurre blanc sauce. Being a pescatarian, my companion was fully aware that hake in the hands of an uncaring chef is destined for disaster. But Christophe Dehosse, chef at The Vine Bistro, is the right person for this occasion – perfection. The Bouillabaisse du Cap came with rouille and croutons. Bouillabaisse comes into its own when prepared for at least eight guests; in single portions it tests the skills of any chef. Once again, Christophe proved to be up to the challenge.

Ordering desserts after such a feast was easy. A selection of arti­sanal South African cheeses for one, confit orange and chocolate tart with orange sauce and pistachios for another. Two of us felt we had reached the pinnacle of dining pleasure and settled for coffee.
I now know it was a mistake; the confit orange and chocolate tart was the crowning glory of the evening.

I am intrigued enough by chef Dehosse’s skills to vow that I shall return, to eat his steak and then the passion fruit soufflé, of which the waiter spoke in an awestruck whisper.

On departing we learnt that Eskom had been load shedding in Stellenbosch during the evening. The Vine Bistro was prepared for such an event and we barely noticed the dimming of lights when the generators kicked in.

A final thought: if you’re having lunch at The Vine Bistro, leave some time for a visit to May de Lencquesaing’s glass collection. 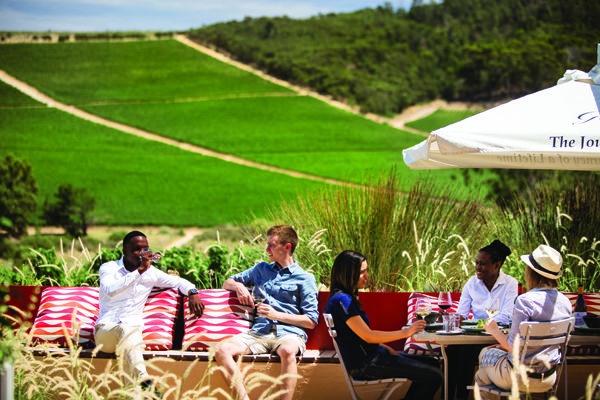 The restaurant’s terrace is ideal for sunny days.

Question: can a living legend reinvent herself? In the case of Madame May de Lencquesaing, the answer is a resounding yes. Now in her mid-90s, Madame May has made a seamless transition from Pauillac, Bordeaux, to Idas Valley, Stellenbosch.

We approached her Glenelly Estate almost in awe, the grandeur of Château Pichon Longueville Comtesse de Lalande firmly in mind. However, once seated and with the friendly staff in attendance, our vinous journey started with fun. The Graham Beck Blanc de Blanc (2012) was crisp, well chilled and served in the most beautiful glasses (tulip-shaped, as is the latest vogue).

We also had a bottle of the Glenelly Glass Collection Syrah (2015) at a very reasonable R175 and the Glenelly Estate Reserve Chardonnay (2016) at R295. These are both outstanding wines, and the latter is an absolute steal in a restaurant of this calibre.

We were tempted by the wine per glass offerings, which were of quality and very well priced, but a reviewer can only do so much. The service was excellent and the glasses befitting an establishment under the ownership of the grand old Madame May.

As this is a wine-producing estate, no byob. – Chris Otto